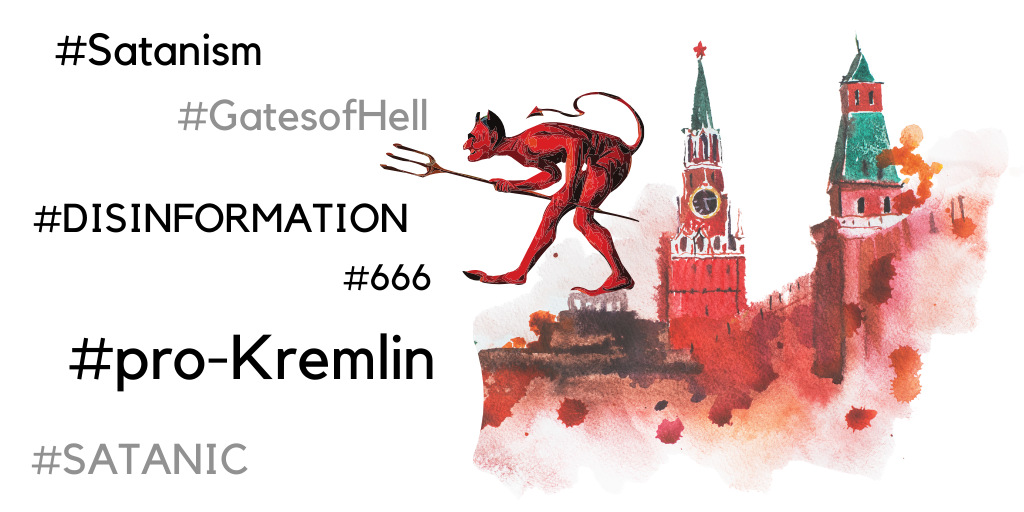 Pro-Kremlin disinformation outlets have employed Satan to prop up their efforts on disinformation. We can see frequent cases of referrals to “The Number of the Beast: 666” and various other symbols, associated with evil forces.

Fort Russ News is a US-based website, established by a think tank in Serbia and with a strong pro-Kremlin agenda. The site is associated with the Strategic Culture Foundation, which in its turn is seen as a “partner organisation” by theMay 13, Fort Russ News published an article, elaborating on jewellery worn by Mrs. Melina Gates in an interview a couple of days earlier:

Just why exactly is Melinda Gates wearing a Satanic upside-down crucifix over last weekend’s round of MSM interviews? Even knowing what we know already about the actual belief system of the people running the U.S right now, that they worship various types of references to Satan (whether Moloch, etc.), nevertheless these kinds of obvious provocations both ‘never cease to amaze’, and yet also raise some very serious questions.

Hashtags like “#Satanism”, “#Satanic”, “#666” have appeared frequently on Fort Russ News, until recently a rather secular website with very little content on spiritual and/or religious matter. Words like “Satanic” have been used more as a means of expressing dislike, than as a description of an ideology. Fort Russ News have been a forerunner in the campaign against Bill Gates, and it is in this context we see the site owners’ new interest in Satan. Articles on Bill (and Melinda) Gates are hashtagged “#GatesofHell”.

Satan is a rare guest in the Disinformation Database: we have three cases of Lucifer. Satan yields 21 results. Anti-Christ – nine. The Devil is mentioned in seven cases out of the 8.500 collected in five years. Most of these cases stem from the national-conservative Russian website Katehon.com. At this site, we find claims about the fire at Notre Dame being a “Satanic ritual” and that the Rothschild family is a Luciferian crime family, controlling the media. In the same article, we can read that the Jewish Star of David also is a symbol of a Satanic Cult. Conspiracy theories are fundamental for the pro-Kremlin disinformation ecosystem, but suggesting Satan as the driving force is, even here, a little far-fetched. Until now.

Fort Russ News has started to explore the Number of the Beast – 666. This comes from The Book of the Revelation in the New Testament, chapter 13, verse 18:

Here is a call for wisdom: Let him who has understanding calculate the number of the beast. It is the number of a man. His number is six hundred and sixty-six.

One of the explanations of the Number of the Beast is that the number is a hint on the Roman Emperor Nero (37 – 68 AD), in Hebrew letters: Neron Qsr. Hebrew letters in antiquity had numerical values, and the combined number of נרון קסר adds up to – 666.

The Spirit of Conspiracy

Now Fort Russ News sees the Number of the Beast, even in places unrelated to Emperor Nero. The number appears in a piece of US legislation, introduced, according to Fort Russ News, “to create a totalitarian One World Government”; and it appears in the number of Bill Gates’ patent for “a human powered crypto mining system”. It appears in an article, attacking the 5G technology, also connecting the Number of the Beast to Bill Gates. And of course, Fort Russ News does not really care about the Devil – they found a way to beef up their traffic.

We have written about the disinformation campaign against Bill Gates. Fort Russ News’ sudden interest in Lucifer follows the same basic concept. If there is an audience for conspiracies – use it. If you want a bad guy: who can beat Satan? The story about Melinda Gates demonstrating a “satanic symbol” fits very well into an existing set of conspiracies – for instance the “QAnon Conspiracy”. Invoking Satan really seems to work for the Fort Russ News. Since March 2020, the sites’ traffic has improved by more than 400 per cent. That’s a hell of an improvement! Congrats!

Back to Ms. Gates’ necklace. In popular culture, an upside-down cross is often understood as a satanic symbol. In reality, it is the cross of St. Peter. When he, the first bishop of Rome, was sentenced to crucifixion, he requested to be crucified with his head down, as he considered himself unworthy of being crucified the same way as Jesus. Below is an Orthodox icon, depicting the scene:

In the video, the cross worn by Ms. Gates appears to be a Greek Cross – a cross with arms of equal lengths. The ring, attaching the cross to the chain, creates an impression of an St. Peter’s Cross.

Going back to the Disinformation Database and the presence of dark powers therein. Lucifer – 3 times, Satan – 21, Anti-Christ – 9 and the Devil – 7: 3 x 21 x 9 x 7 equals 3 969. Move the 3 to the middle 6 and you get 999 – The Number of the Beast, upside down! Quoting the Kremlin’s Propagandiste Extraordianaire, Dmitriy Kiselyov: A coincident? …I don’t think so!