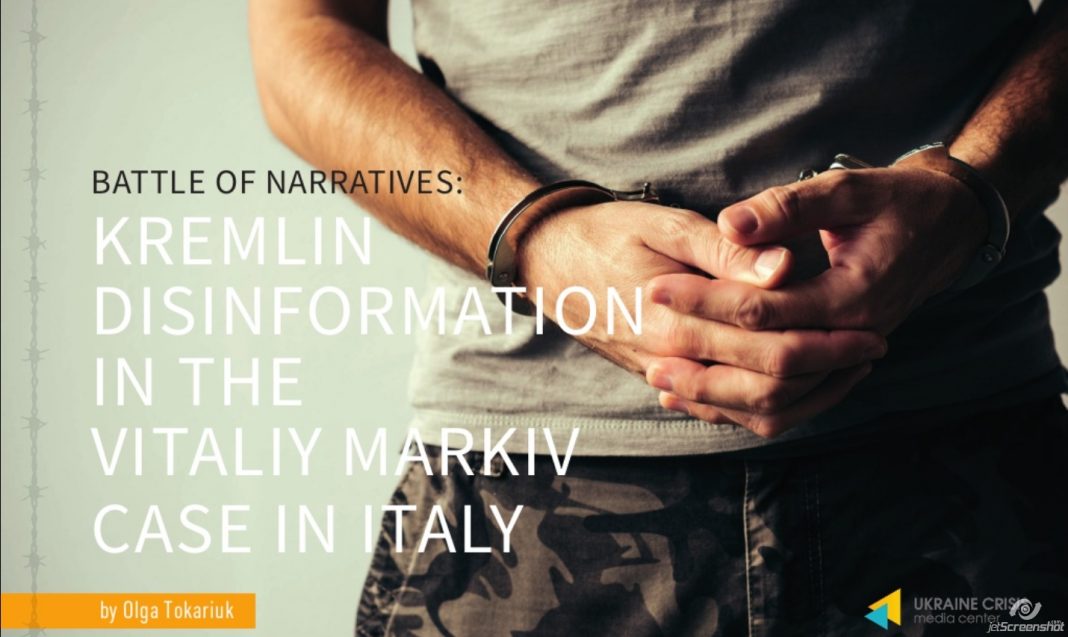 This is a short summary of the “Battle of narratives: Kremlin disinformation in the Vitaliy Markiv case in Italy” research conducted by Olga Tokariuk for the Ukrainian Crisis Media Center.

The verdict of the court of first instance in Italy, which sentenced the National Guardsman Vitaliy Markiv to 24 years in prison for complicity in the murder of photographer Andrea Rocchelli, was criticized by the Ukrainian authorities and some human rights organizations as adopted under the influence of Russian propaganda. International media, including the New York Times, wrote about Markiv’s case as the first case of Kremlin disinformation influencing the judicial system in a democratic Western country.

The aim of this research was to find out what was the actual role of Kremlin narratives and disinformation in Markiv’s case and what conclusions other countries could draw from this story to avoid its repetition.

To this end, Olga Tokariuk, a journalist who has been covering Markiv’s case for more than three years and a co-author of an investigative documentary about it, studied the materials of court evidence and Italian media. She analyzed the text of the first-instance judgement of conviction in Italy and compared the narratives contained in it with the key messages of Russian propaganda about Ukraine and Markiv’s case. A content analysis of Italian media which wrote the most about the case was also conducted. The research also describes the socio-political background in Italy, which contributed to the penetration of Kremlin propaganda in various spheres of life, including the courtroom during the hearing of Markiv’s case.

The main findings of the study:

even before Markiv’s arrest and trial, there was a strong influence of Kremlin propaganda in Italy: Russian narratives about Ukraine were spread by both popular political forces, some of which have ties to the Kremlin, and the media;

Kremlin narratives were present in the first-instance court’s judgement of conviction in Markiv’s case, in particular: the “civil war” goes on Ukraine, the National Guard and the Armed Forces of Ukraine deliberately shoot at civilians and journalists in Donbas, Ukrainian soldiers commit war crimes, Russian forces in Donbas protect journalists and civilians, right-wing radicals and neo-Nazis play a leading role in Ukrainian politics and among the military;

prosecutors and representatives of civil plaintiffs against the state of Ukraine used materials of Russian propaganda resources, such as RT and Russkaya Vesna, as evidence in Markiv’s case;

popular Italian media gave biased coverage of the trial against Markiv: even respected journalists reported presumption of guilt, repeated Kremlin disinformation about Ukraine, and did not give the floor to Markiv’s defense;

a network of Italian online resources, mostly of left- and far-left wing, participated in a campaign to systematically discredit the Ukrainian state, the military, and journalists investigating Markiv’s case; these resources supported the Russian aggression in the Donbas and the Kremlin’s policy in other publications, and one of their authors is a former Italian fighter on the side of the so-called Luhansk People’s Republic;

materials of this online network, which contained disinformation and Kremlin narratives, were disseminated by representatives of civil plaintiffs against the state of Ukraine in Markiv’s case – in particular, the Italian Press Federation, thus giving them more weight in the eyes of the public;

whereas the first instance court’s judgement was passed by jury, it is likely that the disinformation about Ukraine and Markiv’s case disseminated in reputable media and online sources could have influenced their verdict;

taking these factors into account, it is safe to say that Markiv’s case in Italy was an “influence operation” by the Kremlin aimed at discrediting Ukraine and its armed forces, as well as undermining Ukraine’s trust and support from the West.