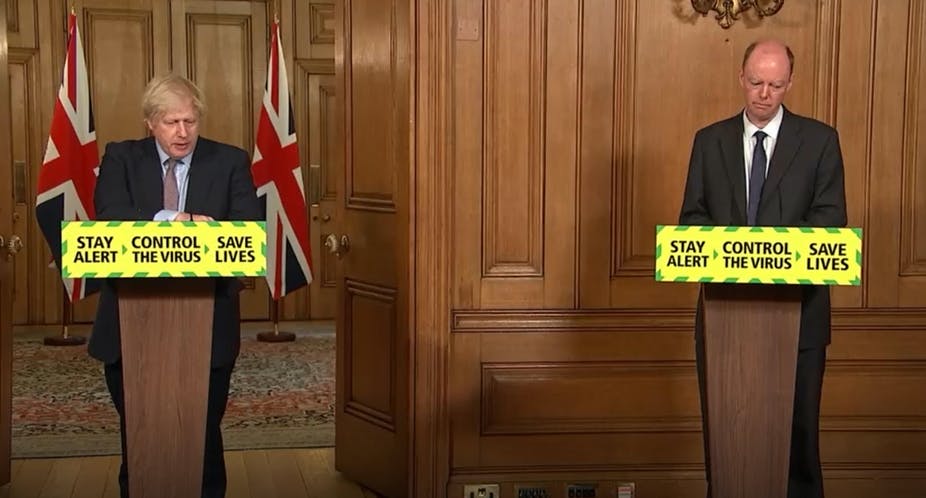 By Stephen Khan, for The Conversation

Studies have suggested social media is rife with disinformation, with surveys showing a high proportion of people have been exposed to false or misleading claims about COVID-19, fuelling dramatic headlines.

But our six-week diary study of news audiences between April 16 and May 27 found that the vast majority of our panel of 200 participants could easily spot fake news. They found stories such as the conspiracy theory that 5G is responsible for the spread of COVID-19 or the quack remedy that gargling with saltwater cures coronavirus immediately suspect.

So it wasn’t fake news being peddled on social media or conspiracy websites that was of most concern. When we asked them about what false or misleading information about COVID-19 they had encountered, many instead referenced examples of what they saw as government or media misinformation.

Our panel of news audiences was made up from a representative mix of the UK population. We mainly asked them questions aimed at finding out about their knowledge of the pandemic and the way it was reported by news media.

When representative surveys reveal that many people have seen disinformation about COVID-19, it is not always clear what the false or misleading information they have seen was – or where it came from. What’s more, even when people are exposed to disinformation, we often assume rather than question whether it will affect their understanding of the pandemic.

But when we asked respondents about some of the most prominent false claims associated with COVID-19 disinformation they were easily detected. For example, the vast majority of participants rightly said 5G was not responsible for spreading the pandemic, that drinking more water does not kill the coronavirus and that gargling with saltwater is not a cure for COVID-19.

But while our panel could easily spot fake news, they were less aware of issues that may help them understand how the pandemic is being handled. Three in ten respondents did not know the government had failed to regularly meet its testing targets, for example.

Almost a third did not realise living in more deprived areas of England and Wales increased the likelihood of catching the coronavirus. And many participants underestimated the UK’s death toll compared to other countries and were suspicious of the UK government’s figures.

After new lockdown measures were announced in England on May 10, we also found many people did not realise they did not necessarily apply to Scotland, Wales or Northern Ireland. Half of all respondents wrongly believed the UK government was in charge of the lockdown measures across all four nations.

When we asked participants what counted as misinformation, some respondents mentioned discredited medical claims, such as Donald Trump believing that injecting disinfectant protects against the coronavirus. But many more told us that either government claims or the media were responsible for spreading false or misleading information. As one respondent told us:

Misinformation to me would be reading an article saying schools to go back on June 1 without many details and then finding out it’s just a phased reintroduction for certain age groups. It’s panicking many parents when that didn’t need to happen, headlines should still be brief but not misleading.

Another participant believed misinformation “related to things the government have said that have later turned out to be false, such as the PPE shortage, number of tests done, care home deaths. I think misinformation in this case relates to the media rereporting facts that haven’t been clear by the government in statements.”

Broadcasters have long been caught up in debates about how far they fact-check government statements while ensuring that the public believe they are being impartial. When we asked respondents about this difficult balancing act, many believed a greater emphasis on fact-checking would enhance rather than undermine public trust in journalism.

As one respondent put it: “I think fact checking is more relevant than ever before because unfortunately people in power make false claims that, sadly, are believed by many people.”

Public faith in the government’s handling of the pandemic has fallen dramatically since mid-April. We watched this develop during our six-week study from April 16 to May 27.

Over this period, participants told us they wanted more media scrutiny of government decision-making, including fact-checking dubious claims. They also wanted more experts informing media coverage rather than politicians.

If it becomes routine for government ministers to appear at the daily Downing Street press briefing without any scientific or health experts – as happened on June 6 – it may limit how far journalists can quiz them about their advice to ministers. As Sky News’ political correspondent, Sam Coates, has pointed out, with no scientific advisers present, it allows the government to select the most politically convenient evidence when responding to questions.

With public confidence in the UK government plummeting, broadcasters have an increasingly important role to play in the pandemic. Over the six-week study, our respondents have consistently said they want accurate and impartial information, with journalists regularly fact-checking political statements and challenging any dubious claims.

Our research suggests broadcasters may have helped people become fairly confident in spotting egregious examples of fake news. But many participants were confused by more routine political decisions, most strikingly the lockdown measures that can affect people in England differently to Scotland, Wales and Northern Ireland.

For broadcasters to more effectively counter misinformation, our research tells us it is not only about boldly questioning what politicians say and holding the government to account. It is about identifying what people are most confused about and finding ways to raise their level of understanding about complex and contentious issues.

By Stephen Khan, for The Conversation