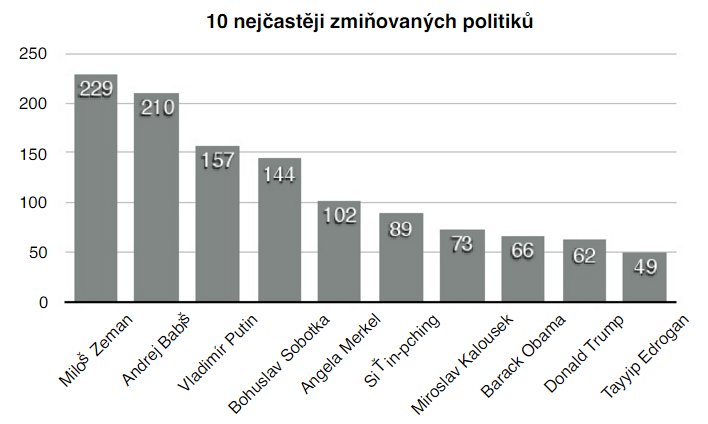 The aim of the analysis was to establish whether, and if so to what extent, manipulative propaganda techniques are used on the websites selected, and whether their reporting is biased towards Russia and/or strongly criticises “the West”, i.e. the USA, EU and NATO.

Sample: 2364 articles (the total number of articles published on the four websites during the period observed was 2660, but only news items were included in the analysis).

Miloš Gregor and Petra Vejvodová, from the Department of Political Science, Faculty of Social Studies, Masaryk University, led the project. Under their supervision, three students of Masters programmes in Political Science and Security and Strategic Studies carried out the coding of data.

Choice of websites: From the ten top most read Czech news websites the selected sites were those most often said to give space to a pro-Kremlin orientated disinformation campaign, to actively advocate the policy of contemporary Russia and its view toward Czech and world events.

Objective: The aim of the analysis was to establish whether, and if so to what extent, manipulative propaganda techniques are used on the websites selected, and whether their reporting is biased towards Russia and/or strongly criticises “the West”, i.e. the USA, EU and NATO.

Russia was mentioned in about one third of the news articles (30.2%), mostly (63.6%) in a neutral manner. Articles portraying Russia positively and negatively were about equal in number. Vladimir Putin was the third most often mentioned politician. Although Putin was the second most positively portrayed figure after China’s president Xi Jinping, the distance from the other most often mentioned politicians was not substantial. A greater difference in tone was apparent in the negative framing of Turkey’s president, Recep Tayyip Erdogan.

Manipulations, when present on the websites observed, were in the overwhelming majority of cases not manipulations of pictures or videos. Such manipulations were marginally represented in the articles analysed. The only exception to this was the Svět kolem nás website, where these practices were represented in 8.5% and 12% of articles containing manipulative pictures and videos respectively. Much more common were manipulative techniques such as blaming, fabrications and labelling. Occurrences of relativisation – whether of achievements of the West or the failures of Russia – were generally low. That changes, however, when viewing the individual themes on which the articles focussed in detail.

In articles concerned with the conflicts in Ukraine and Syria, a lower occurrence than average of most techniques of manipulation was observed. By contrast, relativising (of merits of the West or Russia’s failures) was much more frequent. Whereas this technique appeared in only about 5% of articles overall, in those concerned with the Ukraine, it was recorded in 9% of cases and in articles about Syria the occurrence was even higher at 12%. There was an evident effort to report the conflicts in Ukraine and Syria with restraint, and to prefer techniques that would calm readers and not elicit strong emotions. This was confirmed by an analysis of the emotiveness of the articles.

In total, 17% of the news items were negatively framed, of which every fifth article elicited hatred (19%), every fourth fear (27%), and almost half (48.5%) indignation. Emotions were less often present in reports about Ukraine and Syria: in 11% for the former and less than 5% for the latter. By contrast, negative emotions were present in every third news article about the migration crisis. This reflects the frequency and manner of use of manipulative techniques.

Framing of the most often mentioned politicians

The politicians most often mentioned were Czechs: the country’s President Miloš Zeman and the Minister of Finance Andrej Babiš. Vladimir Putin placed third, ahead of the Czech Prime Minister Bohuslav Sobotka. China’s president Xi Jinping visited the Czech Republic in March; hence his name appeared in the top ten. One of the effects of the migration crisis was the frequent occurrence in news of Turkey’s president, Recep Tayyip Erdogan.

Of the top ten most frequently mentioned politicians, President of China Xi Jinping and President of Russia Vladimir Putin were reported most positively (1); however, the difference in tone, compared to 1 mentions of other politicians, was not substantial. More often, we recorded departures from neutral reporting in references to Angela Merkel and Recep Tayyip Erdogan; these two politicians were frequently portrayed in a negative light, and in both cases in connection with the migration crisis.

(1) Depending on the overall tone and context of the article, each mention of a politician was assigned a value 1 from 1 to 5, where 1 = very positive tone; 2 = positive; 3 = neutral; 4 = negative and 5 = very negative Use of techniques of manipulation

The propaganda one encounters nowadays in the Czech Republic is rather different from that in the past (the Cold War, WWII and WWI) and other contemporary locales such as Ukraine. Images seeking to deliver a clear message that is evidently manipulated (propagandistic) are rare. Attempts to convey emotions and a biased view of the world to the reader are more sophisticated, as our analysis has shown. In the overwhelming majority of cases, the manipulation on the websites analysed did not concern pictures or videos. Within the articles analysed, manipulated pictures and videos were marginal, each accounting for about 1% of cases. They were more common in AC24 reporting (pictures in 2.5% of cases and videos in 5% of cases) and, more importantly, in Svět kolem nás (8.5% and 12% respectively for pictures and videos). Much more widely represented were techniques of pinning the blame on someone, fabrications and labelling (2). Less present than the preceding techniques was 2 demonisation, which appeared in 3% of cases, which is still a relatively high proportion, given how escalated a manner of stigmatising the enemy it is. Relativisation (whether of, for instance, the merits of the West or the negative acts committed by Russia) was noted less frequently than expected. This supports the finding that the monitored websites are not a priori pro-Kremlin oriented, i.e. directly defending Russia and criticising the West. Rather, their tendentiousness is manifest in their framing of individual themes.

(2)  The analysis has not covered the use of certain techniques of manipulation, such as unsubstantiated 2 statements, selective choice of information and lies. The nature of the research was such that these could not be observed; checking for lies, for instance, would require a thorough checking of fact, which would be unfeasible given the research design and the amount of data processed. Beyond the techniques of manipulation, 17% of news items elicited negative emotions, out of which every fifth article elicited hatred (19%), every fourth fear (27%) and almost half (48.5%) indignation. Compassion was present in 0.5% of reporting, most often in connection with the migration crisis.

Tone of reporting and techniques of manipulation: individual topics

More than with other topics, reporting concerning the migration crisis was found to be emotionally tinged (32%). Emotions most frequently expressed included fear (present in 53% of emotionally tinged reporting of the topic), hatred (20%) and indignation (19%). On the Svět kolem nás website, the entire reporting of the migration crisis was accompanied by negative emotions; in contrast with the Sputnik website, where fear or indignation appeared in only 12% of news items. Incidences of most techniques of manipulation such as blaming, fabrication, labelling, demonisation, relativisation and use of manipulative pictures and videos in reporting the topic of migration crisis was in about the same proportion as in the sample as a whole. Labelling was less frequent; appeals to fear, by contrast, were used much more frequently. The smallest incidence of techniques of manipulation was recorded on the Sputnik website; the greatest was on the Svět kolem nás website. The websites also differed in their use of sources and references. Whereas Parlamentní listy (3) and Sputnik provided at least one reference or 3 information source in half of their articles, Svět kolem nás did so in every article on the migration crisis. AC24, by contrast, only in every fourth.

(3)  In these cases Parlamentní listy often quoted experts or politicians

The conflict in Ukraine

Reports of the conflict in Ukraine were less emotionally tinged (11.3%) than those on other topics. Representations of fear, hatred and indignation were uniformly distributed. The lesser emotiveness of this topic might be due to the to the long duration of the conflict; hence, the topic is no longer particularly interesting to the media. Incidences of individual techniques of manipulation contradict this argument, however. The conflict in Ukraine has been relativised not just by the incidence of relativisation proper, but also by the significantly lower-than-average use of other techniques, thanks to which this topic (alongside the conflict in Syria; see below) arouses much less emotion than others. Due to the small sample size, we cannot provide data for individual websites for this topic.

The conflict in Syria

Reports of the conflict in Syria were much less emotionally tinged than those on other topics (4.6%). If present, the prevailing emotion tended to be indignation. In terms of emotional appeals and the presence of techniques of manipulation, the conflict in Syria was presented very similarly to that in Ukraine. On the AC24 website, manipulative relativisations appeared as commonly as in every fifth article. Sputnik, which published 150 articles (vs. 53 for the three other websites combined). The reporting on Sputnik was also less emotionally tinged (less than 3%). With the exception of relativisation, the tendency to use manipulative techniques was less prevalent on Sputnik than on the other websites.

In international-political topics, emotionally tinged reporting was represented in the same measure as in the sample as a whole (17%). Indignation was represented most often (53%), followed by hatred and fear (21% each). In international politics, significant differences in the reporting are apparent between the individual websites’ use of techniques of manipulation. For example, blaming – the most frequently used technique – was present in 44% of news items on Sputnik and AC24; more than 55% in Parlamentní listy; and 61% in Svět kolem nás. For appeals to fear the figures stood as follows: Sputnik – 7%, Parlamentní listy – 14%, Svět kolem nás – 17% and AC24 – 19%. The websites used labelling with a similar frequency (35 to 39%), with the exception of Sputnik, where labelling only appeared in 10% of cases. That same website had the lowest incidence of demonisation (2%); this contrasts with AC24, where demonisation was present in almost 15% of news items. In their reporting about domestic politics, the websites resorted to emotionally tinged news in roughly the same proportion as in the sample overall (14.7%). Of the websites analysed, only Parlamentní listy dedicated themselves to domestic politics (594 articles); the incidence of such news on the other websites was in single digits. Appeals to fear, authors’ opinions in news, relativisations and fabrications were less prevalent than on average. Incidences of other manipulative techniques corresponded approximately to their incidence in the entire sample analysed.