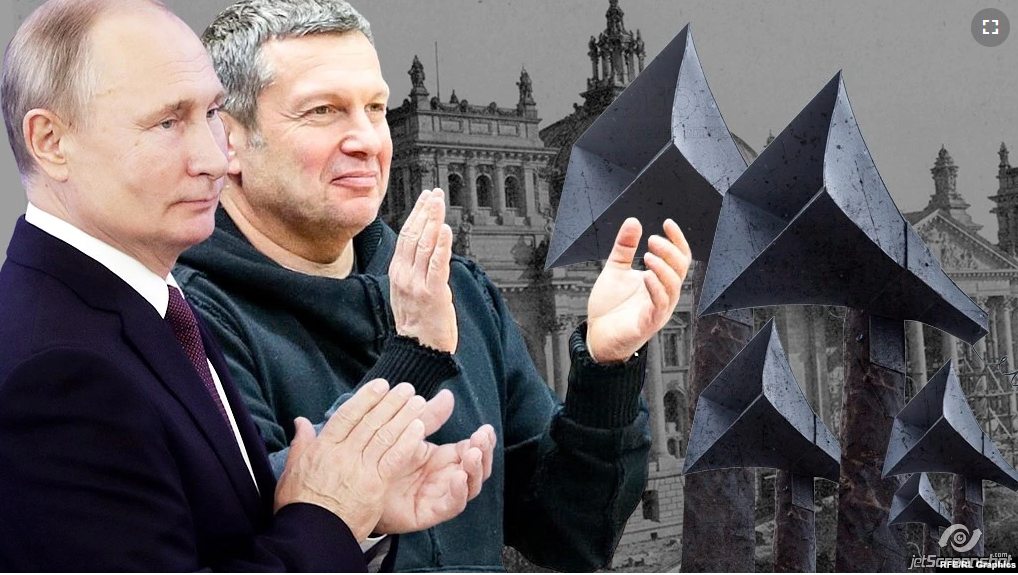 Pro-Kremlin narratives constantly contradict each other, but most of its consumers don’t care.

In the eyes of one of Russia’s leading propagandists, the head of RT Margarita Simonyan, what is happening in Ukraine is, “not even a Russian special operation against Ukrainian troops.”

“This is a civil war in which those Ukrainians who are Russophobes, anti-Russian in the sense in which the Nazis were antisemites, destroys another part of its own people. And Russia is simply on the side of one of the warring parties,” she declared.

This of course contradicts everything that the propagandists, taking their cue from Vladimir Putin, have said since February 24. While rhetoric about a supposed civil war in Ukraine has been a part of official Russian storytelling for at least the last eight years, this was only in reference to the occupied areas of Donbas. As for the so-called special military operation, the Kremlin’s term for full-scale war against Ukraine, it had until now topped the list of approved terminology.

This is far from the first time Russian propaganda has contradicted itself. Its narratives regularly do so, and sometimes are so self-incriminating that they require no refutation. Recall that even before the start of a full-scale invasion of Ukraine, Russian officials and propagandists not only publicly denied their intention to start a war, but simultaneously unleashed a stream of statements warning of an impending campaign of military aggression.

Russian Foreign Ministry spokeswoman Maria Zakharova openly sneered, declaring that German press stories detailing the invasion plans were “a lie” and “anti-Semitic trolling” that “belied common sense.” A month later, she issued a warning about the imminence of war, and the US desire “to morally destroy the citizens of Ukraine.”

At the same time, Russian ideologists and propagandists were openly ignoring the lies of their own official spokespeople and calling for an invasion. The infamous, far-right Kremlin philosopher Alexander Dugin openly demanded the seizure of Ukraine as far west as the River Dnieper, a push towards the Baltic countries, and the issuing of an ultimatum: neutralization or war. He was echoed by the former spy Andrei Bezrukov, who however proposed a somewhat more limited seizure of Ukrainian territory.

After the outbreak of full-scale war, these two contradictory themes continued to coexist in the information space. Thus, Foreign Minister Sergei Lavrov, declared on March 10 without any embarrassment that “Russia did not attack Ukraine.” His colleagues, did not deny the fact of the invasion, but tried to stick to the rhetoric, claiming arguing it was “forced” and arguing that “America dragged Russia into the war”, thereby destroying the existing world order. At the same time, such statements comfortably coexist with directly opposed statements that the destruction of the “Anglo-Saxon world order” is “Russia’s historical mission” and a contribution to the “liberation of the world from the neo-colonial oppression of the West.”

The theory that it was the West that dragged Russia into the war is no less self-contradictory. Thus, the Russian Foreign Intelligence Service claims that Ukraine was allegedly developing nuclear weapons on its own initiative, with the Americans in the know and offering to help if necessary. RIA Novosti said as much on March 3, but the next day reported the former pro-Russian Prime Minister of Ukraine Mykola Azarov claimed that by the end of the year, NATO planned to base its own nuclear weapons on Ukrainian territory.

As for what is currently happening in Ukraine, there is no unity between the Russian authorities and propagandists. Simonyan recently pronounced that Russia is not at war with Ukraine, but with NATO and the United States. At the same time, she began spreading the new argument that the conflict is a civil war, without even mentioning NATO. Leading Russian media figures have meanwhile written policy articles that “almost the entire Ukrainian people is infected with Nazism,” and therefore must undergo total de-Ukrainization and a complete reformatting of national identity.

Nevertheless, the majority of Russians do not dwell on these contradictions, instead selecting alternative explanations from their propaganda supermarket; consumers can choose whatever narrative best suits them, while leaving the rest for other pro-regime shoppers. As has been documented, the average person has a strong psychological need to avoid disturbing truths, and the best way to do it is through conformism.

The second reason for the success of propaganda is a deep distortion of perception that has developed over many years of information twisting. An illusory world has been built in the minds of most Russians, in which the West hates Russia for the very fact of its existence and dreams of destroying it, regardless of the behavior of the Kremlin. Accustomed to living in an aggressively militaristic world, Russians are convinced that the West has the same mentality.

From these two factors, a third naturally follows, which can be described as “ideological cynicism.” The afflicted believe in propaganda only partially, knowing full well how false at least some of it is. However, such people also believe that the end justifies the means and offer support if they see a lie as beneficial to Russia.

The results of these processes are clearly visible in Russian opinion polls. Even pro-Kremlin sociologists do not attempt to hide that focus group participants do not understand the meaning of official justifications like denazification and demilitarization. Nevertheless, people argue that the war “must be pursued to the end.” Another group openly (and more truthfully) states that the war is fought for “the political ambitions of the Russian leadership”, as well as “the struggle for fertile land.”

Nevertheless, the majority of Russians support the war, something confirmed, among other things, by the numerous testimonies of Russian dissidents who report the impossibility of finding a common language with their loved ones. At the same time, they say, the proportion of those who consider the struggle for new territories a worthy pretext for war has increased significantly. In street polls, Russians openly say that “we should take this land for ourselves” and “wipe Ukraine off the face of the earth.”

The official state website Ukraina.ru in its Telegram channel regularly mocks Ukrainians, including female victims of violence. They have also periodically reposted calls to hang the defenders of Mariupol in public from trucks on the streets, attaching signs reading “I am a Banderite” to their chests. This is what the Nazis did to Soviet partisans.

It says something about the radicalization of the population that this is now the discourse, indicating a shift in the principles of many Russians.