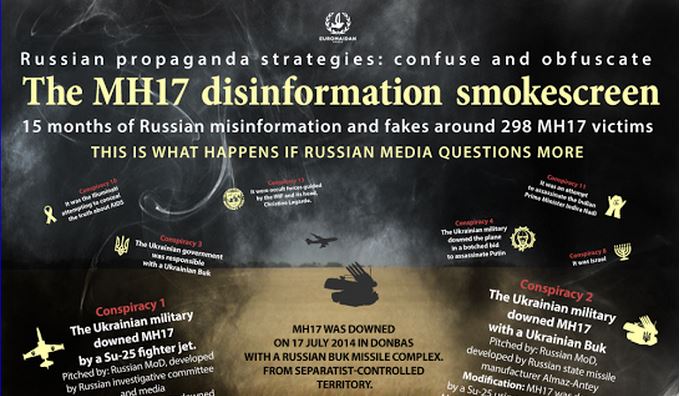 The report of the Dutch Safety Board investigation on the causes of the MH17 crash was released on 13 October 2015. It concludes that the Malaysian Boeing that crashed into the fields of Donbas on 17 July 2014 was destroyed by a surface-to-air Russian-made Buk anti-aircraft missile. The Chairman of the Board admitted to journalists that it was fired from territory most probably controlled by Russian-backed militants, doing away with 15 months of propaganda/conspiracy theories spouted out by Russian media:

The reason for the conspiracy theories is clear:

the most obvious culprit, tractor-drivers and miners that supposedly make up the armies of the so-called “Donetsk and Luhansk People’s Republics,” don’t have the equipment or knowledge to shoot down planes.

If only it they didn’t get it from the Russian army, the involvement of which in the conflict in Ukraine Russia still denies, despite the overwhelming evidence.

Many claims and insinuations have been presented to support this conspiracy theory: Russia’s Ministry of Defense originally pitched the idea by holding a press-conference on 21 July 2014 where it released a statement purporting that Russian air controllers spotted a Su-25 near the Boeing and that the vehicle is capable of reaching an altitude of 10 km. It also released satellite imagery which was  subsequently proven fake by the Bellingcat site of investigative journalism.

Russia’s Investigative Committee, which through the words of an anonymous deserter from the Ukrainian army giving an interview to the Russian tabloid Komsomolskaya Pravda “revealed” that the plane was shot down by a Ukrainian pilot, captain Voloshyn (Ukraine’s SBU subsequently claimed that the interview was a fake and that UA aircraft were not deployed on that day);

The Wikipedia page for the Su-25 was edited to raise its service altitude from 7km to 10 km. These and other conspiracies are debunked on this page.

Modification of Su-25 conspiracy: it was downed by an Su-25 using an Israeli Python Missile. In mid-July 2015, RT gave the good old Su version a revamp by publishing a report from another unspecified “group of old-hand aviation security experts.”

Conspiracy 2. The Ukrainian military downed MH17 with a Ukrainian Buk.This version had been pitched, once again, by Russia’s Defense ministry, which on 18 July 2014, one day after the crash, claimed that the Ukrainian Army had a Buk that was operational in the area. They once again attempted to prove this with faked satellite images which were once again debunked by Bellingcat. Nevertheless, the Russian MoD attempted to submit this version to the Dutch report. Russia’s Buk manufacturer, Almaz-Antey, was the next in line to take up the desperate mission of seriously attempting to prove that it was a Ukrainian Buk fired from Ukrainian-controlled territory.

On their first press conference on 2 June 2015, they first made this claim, and on their second one, which was held “by coincidence” on the day of the Dutch report presentation, they revealed the results of an experiment which “proves” that MH17 was downed by Buk 9M38 missile that Russia has argued is not in use by the Russian army (a claim considered to be “not borne out of the evidence”) and contradicts the Dutch report, which found remains of the missile 9N314M, from a supposed village location that contradicts even the Russian official version presented to the Dutch report.

What is most harrowing, though, is this presentation suggests a connection between Almaz-Antey, Russia’s MoD, and the Russian-backed separatists that were found to tamper with the corpses of the MH17 victims, removing shrapnel of the  9N314M missile from the bodies of the pilots.

The missile that Almaz-Antey tried so hard to prove was not there in the first place.

Oh, Wikipedia was edited in this case too, on 13 October 2015 – to support the “not borne out by the evidence” claim that the 9M38 missiles are not in use by Russia.

Conspiracy 3. The Ukrainian government was responsible for downing MH17Claims made by different Russian outlets purported that MH17 moved off the standard flight path that it had taken every time before (disproved here), and that Ukrainian dispatchers summoned the plane lower just before the crash (disproved here).

Conspiracy 4. The Ukrainian military downed the plane in a botched bid to assassinate Putin.

Russia’s Interfax reported about this, according to RT, based on confidential evidence of an anonymous expert. The Russian tabloid Komsomolskaya Pravda ran a outlandish story about the pilot that did it and his air-controller partner that now hide in Dubai (available in English here, debunked here).

Conspiracy 5. MH17 is actually the flight of MH370 which vanished over the Indian Ocean and it was full of corpses when it took off from Amsterdam.

This theory was pitched by Russian FSB colonel and terrorist leader Igor Girkin and published in the pro-terrorist website Russkaya Vesna. Read about it in English here and here.

Conspiracy 6. MH17 was blown up from inside the cockpit in special operation.

The source of this conspiracy is an interview by LifeNews with an alleged “expert” who claimed to have purchased recordings from Ukraine’s Security Service with conversations of Ukrainian military pilots that observed a supposed explosion inside the plane.

Once again, it was Komsomolskaya Pravda that contributed to spreading this conspiracy, publishing an “intercepted call” recording of two CIA spies that spoke in English so lousy it was dismissed as Russian propaganda by, for instance, the Daily Mail.

Conspiracy 8, 9, and 10. It was Israel, the Illuminati, and an attempt to conceal the truth about AIDS.

More about them here, sadly, no debunking offered. You’ll have to do it yourself.

Conspiracy 11, 12, 13. It was an attempt to assassinate the Indian Prime Minister Indira Nadi, it was the Chinese, it was occult forces guided by the IMF and its head, Christine Lagarde.

Read about these and other entertaining versions in this bellingcat summary. And if you want even more —

Instead of a conclusion

The history of conspiracies relentlessly spouted by Russian state media outlets over 15 months points to a striking insensitivity to the tragedy of the relatives of the MH17 victims and a chilling relationship between Russia’s MoD, Almaz-Antey, and the Russian-backed militants that tampered with the corpses of the plane’s pilots to remove traces of a Russian-produced missile, but not only. It gives us valuable insights into Russian maskirovka strategies of confusing and concealing:

Alya Shandra is the managing editor at Euromaidan Press. She is a civic activist based in Kyiv and an expert in environmental and geography issues