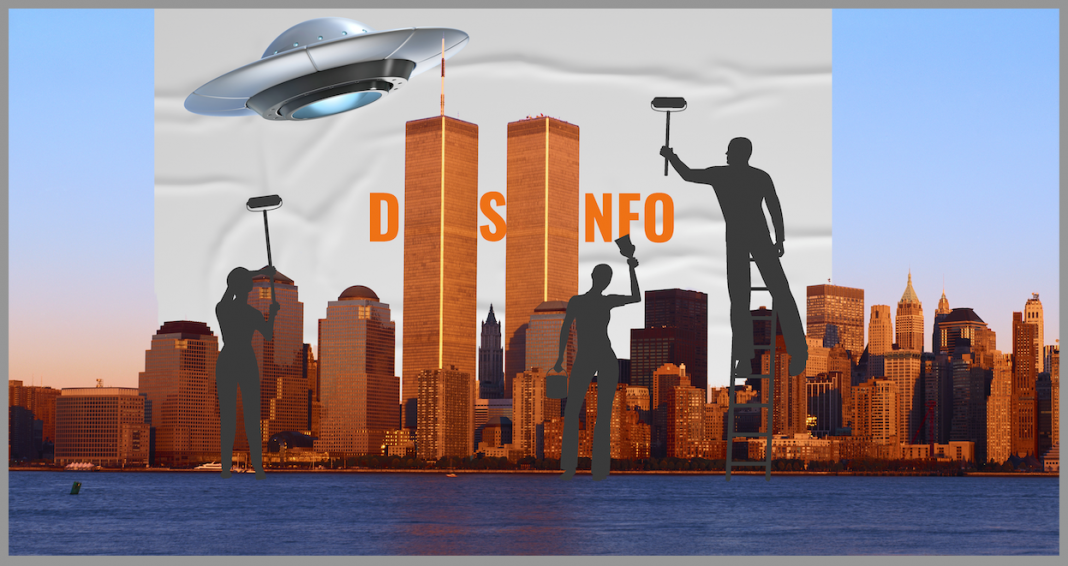 This week marks the 20th anniversary of the 9-11 attacks on World Trade Center in New York and the Pentagon in Washington, D.C. – a decisive moment in international politics, and a point where the world community unanimously expressed solidarity with the victims of the attack.

In Russia, 9/11 have turned from a ‘singular’ issue focussed on solidarity with US to a blend of disinformation, policy combatting terrorism and handling of Afghanistan on the new principles.

A closer look at how disinformation found its way into Russian state-owned and pro-Kremlin media illustrate the instrumentalisation of conspiracy theories.

Russia’s President Vladimir Putin was the first world leader to contact the US president and express his condolences back in 2001. Russia supported the UN Security Resolutions including UNSC 1386 mandating the NATO-led ISAF-military engagement in Afghanistan.

Mainstream Russian media did not devote a lot of attention to US and its allies in Afghanistan and international terrorism only featured in connection with Russia’s own challenges in addressing security in Northern Caucasus and large-scale terror attacks, including Beslan school hostage taking. Events in Afghanistan were news items, rather than elements to support a policy or narrative.

The ‘Duplex’ years – Some Support while Hosting Conspiracy Theories

Nevertheless, over the years, especially after the US invasion in Iraq and the establishing of US logistic bases in Central Asia that Russia disagreed with, the Kremlin media, especially outlets targeting international audiences, have attempted, as illustrated below, to distance itself from both the Afghanistan operation and from Putin’s original position of solidarity with the US after 9/11.

While Russia was allowing US the use of Russian airspace and railroad for supply lines, other things started in the infosphere. The state-run Sputnik news agency with its many language platform began to give space and promote conspiracy theories on the 9/11 attack.

The stories promoted well-known disinformation tropes: US “Deep state” and special services planted explosives in the twin towers. The aim being to strengthen their role in society and limit personal freedom. Second, US got somebody else to do it: Israel teamed up with sinister, yet undefined, ‘global economic forces’ with the aim of starting a war with the Arab world.

There are several cases of this in the EUvsDisinfo database on disinformation. Sputnik in German has been active, in 2019 here, in 2020 here. For the Spanish audience here and here, Italian reader see here and ENG/US audiences can see here or here. The Belarus and Czech audiences also get a version here and here.

Several outlets, connected to Kremlin-loyal oligarchs, also indulge in the conspiracy theories around 9/11. Thus, the nationalist website Tsargrad, explains to its readers the “real story” behind the attack:

Did really a pity gang of Arab college drop-outs do all this? This was not done by some marginal terrorists and not using aircraft. This is visible from the example of WTC-7. This was done by others. By those, who had access to unique explosives, who were controlling the security services and the leading media, who had access to the airlines, to the cell phone networks, those, who had prepared in advance for the shock of 9/11 in the US Congress and at the stock market exchange and accounted for it in their trading. This was done by the American “Deep State”. There is no other explanation to this.

The above are some examples, but one can observe the same phenomenon seen in other disinformation dynamics: a fringe, sometimes tin-foil-hat theory get picked up and amplified. Then it start to live its own life spreading even further and being supplemented by offspring theories. The COVID-19 is the most recent example that has given rise to an entire ‘world of conspiracies’ constantly evolving.

Facts are irrelevant. It does not matter if tons of authoritative studies, enquiries, scientific research or the independent US bipartisan 9/11 Commission report or plain common sense exists to kill wild ideas. Conspiracy theories have an almost magical attraction and feed the doubt and scepticism otherwise so dear to our mind.

Conveniently forgetting their own abrupt retreat from Afghanistan in February 1989, Russian state media has met the US/West withdrawal from Afghanistan and the quick return of the Taliban with open Schadenfreude. Leading Russian politicians are now attempting to describe the Taliban as moderate, sensible and pragmatic, and their return to power – a “revenge against Globalism”, writes Aleksei Pushkov, long-time Kremlin-affiliated TV-host and now a member of the Russian Parliament’s Upper House:

What happens in Afghanistan is a revenge of history, religion and ideology against modernity and globalism. This is not an assessment; this is accepting the objective facts.

(Pushkov has a flare for “objective facts”. Another one is the claim, that the Americans never made it to the moon).

In twenty years, since 9/11, the Kremlin policies has evolved from a position of compassion and dialogue and cooperation on international matters, to a mind-set of open hostility towards Western world, indulgence of conspiracy theories, and reflexive anti-Americanism.