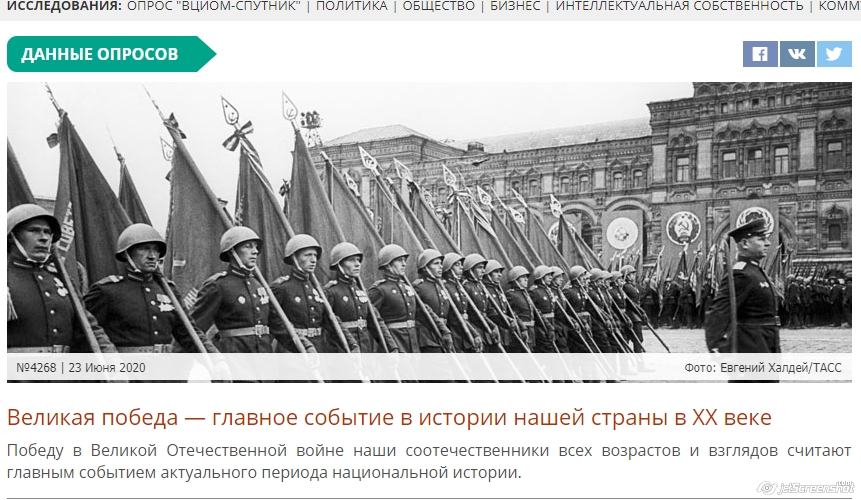 Such views were more widely held among older Russians and less widely among younger ones, but, according to the polling agency, the idea that “Victory in the Great Fatherland War is a secondary or ordinary event [in the history of the country] is not found in Russia among the other generation or among younger people of various areas.”

Only two percent of all Russians express that opinion, VTsIOM says.

On the one hand, of course, such unanimity about the 1945 triumph is no surprise: it  reflects both the propaganda surrounding this event that has been a centerpiece of Vladimir Putin’s time in office and that has grown in intensity in recent years and especially in recent months.

But on the other, it is troubling because this attitude has the effect of distracting attention from all the other events good and bad that have marked Russian history not only over a millennium but especially in the last 100 years and also of promoting the notion that war and victory in war are the most important things for the Russian people.

Putin is interested in both: By playing up the Soviet victory in World War II, he distracts attention from the crimes of Stalin and the Soviet system before and after that event. Indeed, for him and for many, the victory acts as a kind of universal moral solvent removing all actions that would otherwise be the subject of attention and condemnation.

And by focusing on war and victory rather than peace and progress, the Kremlin leader has found the key to mobilizing the population to support massive military spending and military action rather than be concerned about their own well-being and positive relations with each other and with other countries.

Consequently, while positive attitudes toward the victory of Hitler are justified especially in a country which made such a massive contribution to that outcome are understandable, this focus on the Victory alone rather than on its victims or on any other event is worrisome. It does not bode well for the future.