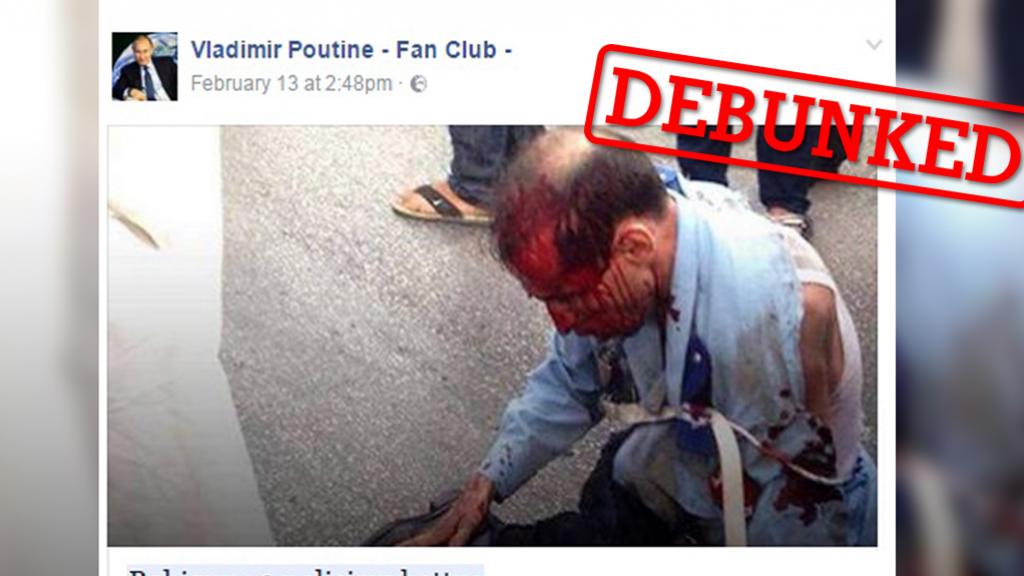 First: start with a strong headline. “Three police officers beaten up in Bobigny” will do. Second: add a photo of a man in a torn uniform with blood streaming down his face.  This was the very post that spread like wildfire on social media on Monday, February 13, the day after riots rocked the Parisian suburb of Bobigny amid allegations that a young black man called Théo was anally raped by the police.

It was published by a pro-Vladimir Putin Facebook page, mixed recent news headlines with an old story and a photo that was actually taken in Morocco. Let’s break it down.

The post, published in French on page that describes itself as a fan club of Russian President Vladimir Putin, was shared more than 8,000 times.

The Facebook page links to a blog called “Echelle de Jacob” [“Jacob’s Ladder”], which explains that three police officers were beaten up while trying to carry out a routine ID check.

The important bit: the post was published the day after clashes in Bobigny between the police and protesters demanding justice for Théo, the 22-year-old man that suffered serious injuries on February 9 when he was arrested by police in the Parisian suburb of Aulnay-sous-Bois.

Why this story has nothing to do with the recent protests

The blog does add an interesting link at the bottom of the post — that goes to an article from the French daily newspaper Le Parisien, which was published on January 7, 2017. On that day, three police officers had been injured in Bobigny when they were carrying out an ID check in a building in the suburb.

However, the blog post doesn’t make it clear at any point that the “news” is not, in fact, new, and says that the events happened on “Friday” — letting readers assume that the events (and the photo) happened the day after Théo was arrested on Thursday, February 9.

In fact, the night of the violent clashes on February 11, no police officer was injured [link in French]. The only officer with injuries was hurt during the protests in a different area, in Mantes-la-Jolie.

The Facebook post on the Putin fan club did much the same thing: deliberately left out the date and the context around the events. But many users fell for it, posting outraged comments below the post, which garnered over 500 comments.

Translation: “Media, where are you?? You’re not saying a word about this whereas for Théo you wrote pages and pages and published loads of videos (all the same, anyway) and now people are beating up our police and you are nowhere to be seen… I hope one thing, that the next government puts you in your place when you’ve been brown-nosing the socialists, you should be in a rubbish bin, that’s where”.

Any good fake news post would be nothing without a shocking image to go alongside it: here, a policeman kneeling on the ground with blood all over his face. Except the photo wasn’t even taken in France, but in Morocco, on July 9, 2015. A Moroccan policeman, Rachid Chakhtouna, had been run over by a car in Tanger, and died soon after from his injuries. You can see the photo here in the Tangiers Times [in Arabic].

The photo appears in the Tangiers Times.

Okay, okay: so the blog ‘Jacob’s Ladder’ can deny responsibility because underneath the photo are the words “illustrative photo”. Except that this caveat doesn’t appear in the Facebook posts shared by users, leaving them to make the assumption themselves that the photo shows the events written in the headline.

This post is typical of fake news: a shocking image, an old news story and a timely publication relating to current affairs.

Don’t be caught out by this kind of post! You can instinctively learn how to check news stories: start by checking the publication date or searching exactly where the photo comes from. For more information, check out our guide to verifying information on social networks.