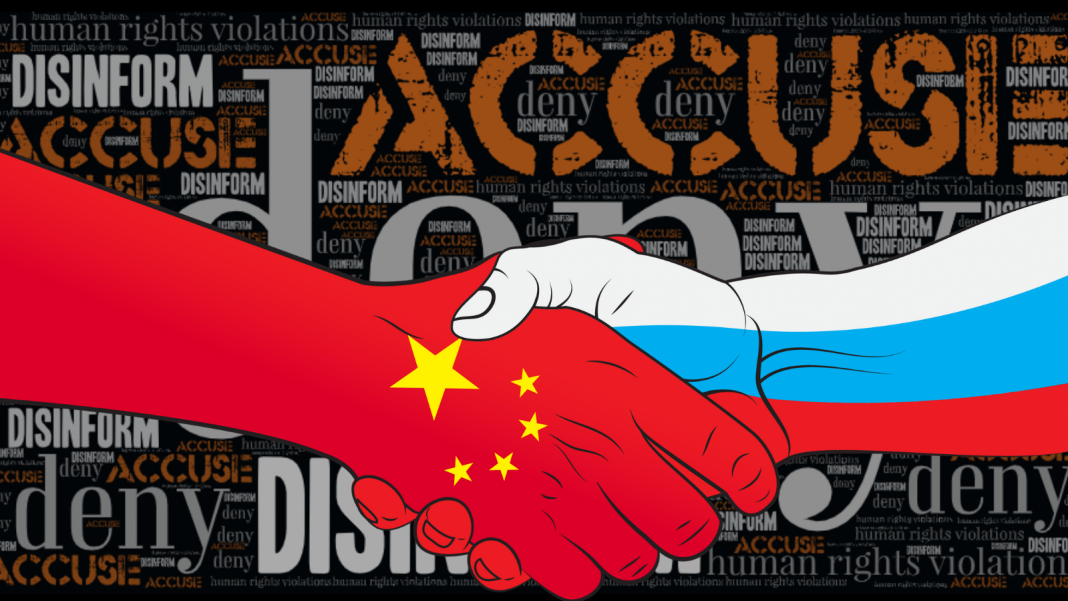 “Cherished dreams can only come true through honest work! […] the people of Xinjiang and all hardworking people deserve the respect of the whole world”, trumpeted Rossiskaya Gazeta shortly after International Labour Day. The newspaper – an official outlet of the Russian government – used the occasion to declare that Western allegations of forced labour in Xinjiang were “absurd” and aimed at undermining the development of the region.

This was just the latest example of pro-Kremlin media defending China’s human rights record amid growing global concerns over the repression of the Uyghur population in China’s Xinjiang province.

Earlier this year, an op-ed in Russian state-owned RIA Novosti news agency claimed that the province was a battlefield of “global lie campaigns” against China aimed at discrediting the 2022 Beijing Winter Olympics. In the past, pro-Kremlin media have also falsely alleged that reports denouncing the repression of Uyghurs in China were exaggerated and a part of “propaganda”, and that “fakes” about slave labour in Xinjiang were refuted by the Uyghurs themselves.

Such messages downplaying human rights violations in China or dismissing them as outright Western propaganda follow the official narratives of the Chinese authorities, aiming to give them more prominence and a veil of international legitimacy.

Pro-Kremlin adhesion to the China story

Throughout the years, pro-Kremlin disinformation has been portraying universal human rights as a “Western Trojan Horse”, a tool allegedly used to distract the public from internal problems in the West and eliminate Russia as a geopolitical actor. Such claims have found a sympathetic ear: earlier this year, Russia and China released a joint statement depicting their common vision of the world order and rejecting the West’s alleged use of human rights as an excuse to interfere in other countries’ internal affairs – which has been a recurring argument for Beijing.

To defend the repression of the Uighurs and attack the West over the human rights sanctions, all pro-Kremlin media have to do is relay the official position of Beijing. Pro-Kremlin outlets operating in multiple languages amplify the narratives of the Chinese officials, who deny any allegation of genocide or forced labour in Xinjiang, regularly accuse critical voices of being “anti-China”, and refer to conspiracy theories blaming the CIA for allegedly stirring unrest in the region. In the most recent example, Russian state-controlled Rossiya 24 TV channel dispatched its own journalist to Xinjiang to tour factories and schools in the region and assert that the local people “harmoniously combine prayer, communist spirit and national motives”. Such “findings” squarely contradict documentary evidence, including China’s own official documents and eyewitness accounts which illustrate the extent of the crackdown on Uyghurs and other ethnic minorities in Xinjiang.

Both countries’ state-controlled channels are also aligned in their criticism of independent media investigating human rights abuses in Xinjiang. China’s English-language cable news service CGTN has accused BBC of misrepresenting “professional training institutes” in Xinjiang as camps with rampant rape and torture, and claimed that the “BBC and some Western media have become heralds for international anti-China campaigns”. Soon after, Sputnik News followed with an op-ed calling BBC the “British Black-ops Corp” and a “cog in the Western imperialist machine”, and accusing the British media outlet of attempting to destabilise China.

In the past, China had mostly refrained from attacking Europe’s human rights track record, as this contradicts the golden principle of “non-interference” propagated by Beijing. However, faced with rising international scrutiny over Xinjiang, Chinese state-controlled outlets have turned to “whataboutism”. This is a disinformation tactic perfected by pro-Kremlin media, which attempt to discredit an opponent’s credibility by accusing them of hypocrisy, usually without any evidence.

In March 2021, after the EU sanctioned Chinese officials for human rights violations in Xinjiang, Chinese state-controlled Global Times published an infographic listing, under the EU flag, various EU human rights “misdeeds” ranging from the Holocaust to the gender pay gap in Luxembourg. Shortly after the publication, the infographic was surreptitiously edited to remove references to the EU and the Holocaust.

A screenshot of a tweet shared by Chinese state-controlled outlet “Global Times”, 23 March 2021.

Soon after, the French edition of RT published a Chinese government report on human rights violations in the US focused on racial justice protests, and mentioned China’s “standoff with the West” regarding its human rights situation. All the while transmitting Beijing’s arguments of “intimidation” and “hypocrisy” without ever questioning China’s version.

This is not the first instance of Russian and Chinese state-controlled media outlets converging on the same topic and engaging in similar disinformation narratives. Last year we have observed how China’s state controlled CGTN amplified the pro-Kremlin disinformation trope about US “secret labs”.

The alignment of messaging in state-controlled media does not necessarily indicate systematic coordination of (dis)information efforts. After all, although both Russia and China have engaged in targeted influence operations and disinformation campaigns around COVID-19 – with the underlying claim that autocracies are better placed than democracies to deal with emergencies – both sides have avoided promoting each other’s vaccines (as they are commercial competitors in the vaccine market). Indeed, according to Mercator Institute for China Studies (MERICS), the cooperation between Chinese and Russian state-controlled media is much less focused on creating a good image of one another than it is on building up the joint threats. It seems that when it comes to human rights protection, both sides have opted for the same convenient target.