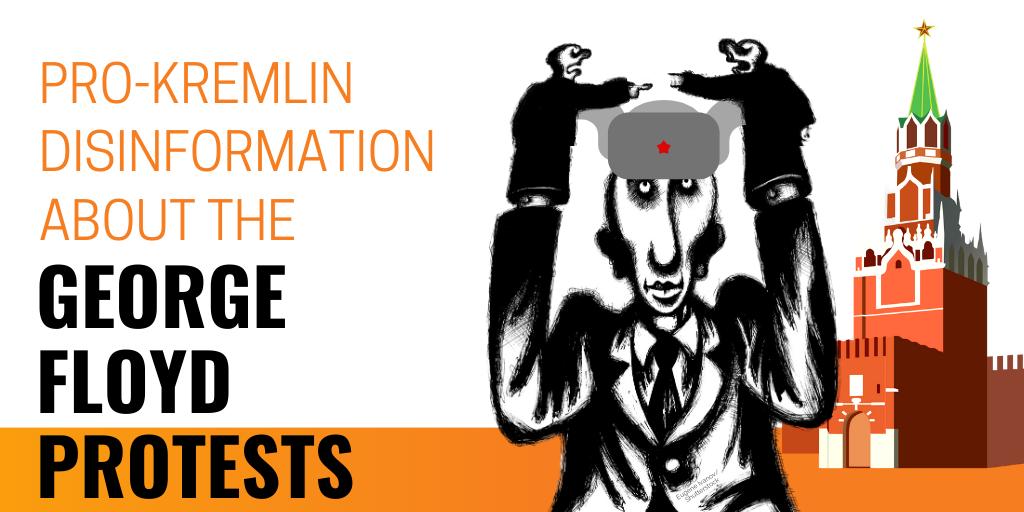 The pro-Kremlin disinformation network and the protests in the US

In the world of the pro-Kremlin disinformation network, protests are never a genuine expression of popular discontent. Protests are always staged, be that in Hong Kong, France, Venezuela – or the US.

The violent protests against police brutality are dominating world news, just as they dominate the flow of disinformation. The pro-Kremlin disinformation ecosystem attempts to exploit the protests in every possible way – expressing sympathy with the protesters, as well as conveying openly racist sentiment.

One of the most influential Russian English-language outlets is SouthFront. EUvsDisinfo has described how the outlet can be tied to Russia, and how SouthFront attempted to hide its Russian connections.

South Front has a clear picture of the protests: it’s a colour revolution, a fake popular uprising, set up by “Globalist Corporations” targeting Donald Trump.

The situation is such that typically, it was a standoff of US President Donald Trump and the US national industry, in a standoff against the globalist and the non-mainstream corporations.

We can see a similar approach on Strategic Culture Foundation: the protests are the Deep State’s attempt to create an “American Maidan”:

Today’s fires which have spread across America in the wake of George Floyd’s murder at the knee of Minnesota police officer Derick Chauvin has presented America with the chance to do some serious soul searching. It has also presented certain Deep State opportunists, color revolutionaries and anarchism-financing billionaires a chance to unleash what some are calling an “America’s Maidan” in the hopes of accomplishing what four years of Russiagate failed to do.

The idea of the protests as an “American Maidan” was reflected in the Komsomolskaya Pravda, Russia’s largest daily, with a circulation that puts it in top-20 in Europe. An openly racist version of the text was spread by Margarita Simonyan, the editor-in-chief of RT and Sputnik, as reported by the EUvsDisinfo. The text, endorsed by Ms. Simonyan, ends:

Send runners everywhere, call to the World. Be assured – in this very minute a slow coup d’etat is played out by the bureaucrats in the White House. If the Americans will take my advice into consideration, I hope we can see the United States becoming a real Ukraine. Good luck, friends! The entire progressive humankind is with you! Beat the whites until they turn black.

Several elements of the pro-Kremlin English-language ecosystem are based in the US. Fort-Russ News, another frequent contributor to the EUvsDisinfo database, is also ready to describe the protests in the US as staged by the Democratic Party:

This color revolution is a DNC coup against constitutional government.

A particularly special outlet is the US-based, Russian nationalist site Russia Insider. EUvsDisinfo reported on the site’s decision to adopt an openly anti-Semitic editorial policy in 2018, and it is a frequent contributor to the disinformation database. The site has no visible connections to Russian state structures, but is demonstratively loyal to key Kremlin priorities. Russia Insider has gone fully racist on the protests, giving room for white supremacists:

Why is Minneapolis Mayor Jacob Frey, who is Jewish, actively encouraging the mobs burning down his police department’s precinct?  Why is the President of the United States reduced to impotently begging Yoel Roth to let him tweet? Why has Trump decided to let Minneapolis burn as he cowers under his desk inside the White House, all while the NYPD under “woke” Bill De Blasio viciously brutalizes people protesting for the same cause? Traditional understandings of how power is brokered and administrated do not apply.

All white people are targets, no white person can expect either of the existing parties to the rescue. When November comes around, we must vote no-confidence. This is America, and its system is out to destroy you.

This is not Kremlin policy. It is impossible to claim that the Kremlin has an explicitly racist agenda, but the pro-Kremlin disinformation network reaches out to a great variety of audiences, with which it seeks to find distinct avenues of appeal. Sites affiliated with state structures share content and contributors with sites without any visible connections to the Kremlin. A Red, White and Blue All-American Maidan.

Creating rapport with white supremacists works just as well as reaching out to leftist, anti-capitalist groups and individuals; like here:

It is entirely believable that the current violence is largely instigated. The media obediently relayed Attorney General Barr’s claim that rioting was led by the anti-fascist groups known as ‘Anti-Fa’, until proof was uncovered of a deliberate White House/White Nationalist plan to provoke violence by unsuspecting protesters who long ago forgot if they even knew it, that Donald Trump’s most powerful backers in 2016 ranged from David Duke, the Grand Wizard (sic) of the Ku Klux Klan, to the white nationalist millionaire hedge fund owner Robert Mercer, who hand-picked several of Trump’s initial cabinet.

So while one part of the pro-Kremlin network defends the Antifa movement, the above-mentioned Russia Insider vehemently attacks it:

Antifa, the extreme anarchist-communist movement, has rioting down to an art. The first broken window is the blood in the water for looters to move in. When the looting is done, those carrying flammable chemicals start fires to finish the job. Footage recorded in Minneapolis and other cities show militants dressed in black bloc— the antifa uniform — wielding weapons like hammers or sticks to smash windows. You see their graffiti daubed on smashed up buildings: FTP means ‘Fuck the Police’; ACAB stands for ‘All Cops Are Bastards’; 1312 is the numerical code for ACAB.

The message looks contradictory, of course, but a common element remains: the protests are orchestrated, staged; not a genuine expression of popular discontent. In the Kremlin ecosystem protests never are.

In other situations, we have seen the Kremlin offering platforms to anti-vaxxers, to 5G conspirationists – the Kremlin even reached out to those who doubt the moon landing in 1969. Earlier, we saw Kremlin offering strong support to the anti-migration community – all in order to create rapport with an audience. The message is not really the important part in disinformation – the priority is to reach out to, multiply, magnify and support discontent and create distrust in the system.

Anything goes when the Kremlin desperately is seeking an audience.