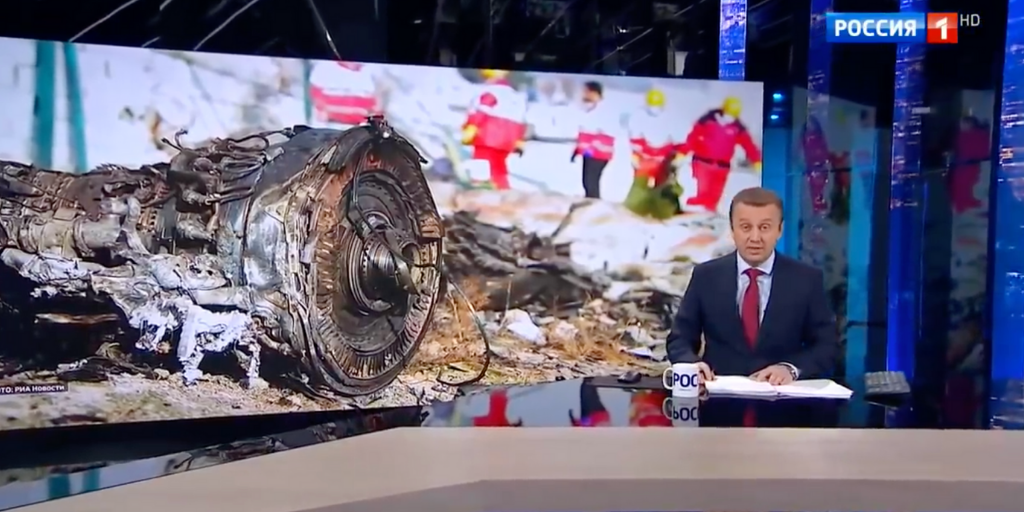 Russian state media were put in an awkward position when Tehran on Saturday admitted having downed Ukrainian Airlines Flight PS752, allegedly due to a mistake.

The Iranian incident echoed that of Malaysia Airlines Flight MH17, which was shot down over eastern Ukraine on 17 July 2014, apparently also due to a mistake. The Kremlin still denies its responsibility for this incident, in spite of overwhelming evidence.

We took a look at how Russian state media reacted to the tragic news from Iran – as well as some examples when Kremlin-loyal have eventually acknowledged having lied.

As underlined by BBC’s Russian Service, Russian state TV Rossiya 1 initially mocked reports about Iran’s responsibility as “yet another case of ‘highly likely’” (an expression central to Russian state media’s and government communicators’ attempts to ridicule the Skripal case in Salisbury, U.K.)

Under the headline “Demonizing Iran”, the Russian state outlet RT’s Russian service concluded that “American media will continue to distribute similar versions of the crash of the Boeing 737, to some extend in order to distract the world community from how the conflict between Iran and the United States developed” – again, this was before Tehran actually admitted its guilt.

The online outlet Voennoe Obozrenie connected the incident in Iran to the MH17 case; however, through promoting the conspiracy theory that in both cases, the US was the real perpetrator, hence the headline: “Falling Boeing Airlines: A Secret US Weapon”.

When the masks fell in Crimea

Perhaps the most prominent example of the Kremlin admitting a lie came from president Putin himself.

In a documentary broadcast a year after the illegal annexation of Crimea, he confessed that the invasion had been ordered weeks before the “referendum” on the Ukrainian peninsula

The president thereby also acknowledged that the infamous “little green men” had in fact been Russian troops; and that the official denials of this had been nothing but a smokescreen.

Children for sale and a computer game

In other cases, pro-Kremlin media have admitted having lied in less straightforward ways.

When Pervy Kanal (Channel One Russia) was exposed for having used a screenshot from a computer game to illustrate a news story about Syria, a representative of the state TV channel explained to RBC that the reason was a mistake made by one of the network’s video editors.

In April 2015, Gazprom-Media’s NTV claimed that “A ten year old girl has been killed by Ukrainian government forces in Eastern Ukraine”. Later, NTV producers confessed to the BBC that the story had been entirely made up without knowing that they were on camera.

After being exposed by EUvsDisinfo and the independent Russian outlet The Insider, Russia’s NTV deleted a tweet, which claimed that gay men could buy children at a fair held in Brussels; the TV story and its disinformation, however, were not retracted by the network, which is owned by Gazprom-Media (follow this link to the EUvsDisinfo data base to see NTV’s original tweet, which it has now deleted).

Click on the video to see how NTV claimed that babies are for sale in Brussels, including the tweet which the network has now deleted.

Why can the Kremlin not tell the truth?

Not only have the authorities in Moscow and the media they control denied Russia’s responsibility for the downing of Flight MH17; they have also tried to distract and confuse global audiences with dozens of disinformation stories about the cause of the tragedy.

The MH17 lies have inflicted “irreparable cost of Russia’s international reputation,” journalist Christo Grozev writes in his comparison of how the Kremlin has handled the two incidents, published by Moscow Times.

However, as the examples above show, it is not completely impossible for Russian authorities and the media they control to admit a lie – it has even been done from the highest level of authority. So perhaps the time has now come for the Kremlin to give truth a chance; for the sake of the families and loved ones of the victims on board Flight MH17.

What makes it unlikely that Tehran’s confession will inspire Moscow to tell the truth is that the Kremlin’s entire narrative about not being involved in the conflict in eastern Ukraine would disintegrate into little pieces.

Just like a Boeing 777 with 298 men, women and children on board does when it is hit by a Russian BUK Telar surface-to-air missile.