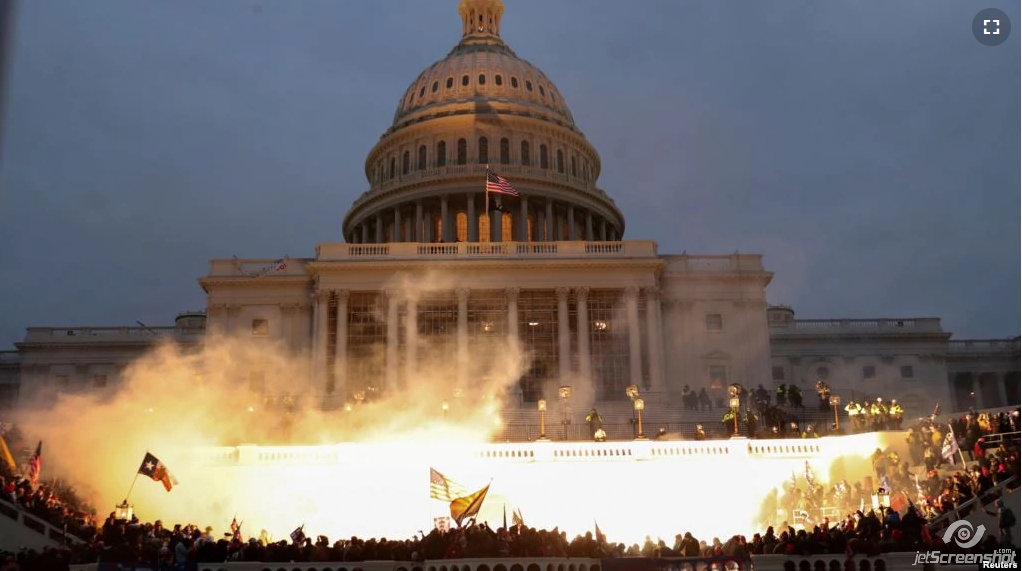 By Mariana Castro, for Polygraph

On January 6, the eyes of media worldwide were fixed on Washington, D.C., as a pro-Trump mob stormed the U.S. Capitol, forcing Congress to stop its count of electoral votes from the November 2020 presidential election, which affirmed the victory of President-elect Joe Biden.

Rioters broke past police, occupied, vandalized and looted parts of the building. Lawmakers were evacuated and the Capitol was placed on lockdown for several hours. Five people died in the unrest, including one woman — a Trump supporter who was fatally shot inside — and a Capitol police officer who later died from injuries sustained in the melee.

Brazil’s largest conservative radio station, Jovem Pan, covered the events, including on its 6 p.m. show “Os Pingos nos Is” (The Dots on the I’s). Toward the end of the show, Olavo de Carvalho, a self-proclaimed philosopher viewed as President Jair Bolsonaro’s intellectual guru, was interviewed on the storming of the U.S. Capitol.

However, during his half hour interview, which has recorded more than 1.3 million views on YouTube alone, Carvalho spoke little about the events that were unfolding at that moment in Washington, D.C. Instead, he spread the same disinformation about election fraud that fueled the storming of the U.S. Capitol in the first place.

Carvalho’s many false or misleading statements included the claim that fraud actually occurred in the U.S. presidential election, that Joe Biden has Parkinson’s disease, that Kamala Harris works for the Chinese government, and that China and Iran, among other countries, were behind Biden’s candidacy.

“Everything in this election has been fraudulent.”

Carvalho started off his interview by saying: “The first thing we have to acknowledge is that the existence of fraud [in the 2020 U.S. presidential election] is absolutely undeniable. The number of scientific studies that have been done in respect to it prove that the election of Joe Biden is impossible. How can you compare one candidate to another that can’t gather 50 people on the streets?”

The assertion that fraud cost Trump the election is false.

Trump’s legal team and Republican allies filed numerous lawsuits disputing the results of the November 3 presidential election, and alleging fraud, but most were dismissed by state and federal judges

Between November and December 2020, NBC News tracked down the status of 40 Trump legal challenges to the election in different states. It reported that “most of them have been shot down or withdrawn, and no court has found even a single instance of fraud.”

USA Today quoted Marc Elias, a Democratic election lawyer who joined Biden’s campaign team in September 2020 , as saying that 61 of the 62 state and federal lawsuits filed by Trump and his allies have failed. The dismissals were either “for lack of standing” or “based on the merits of the voter fraud allegations.”

The newspaper also noted that these rulings were made by “both Democratic-appointed and Republican-appointed judges – including federal judges appointed by Trump.”

On November 12, the U.S. Cybersecurity and Infrastructure Security Agency issued a statement saying that “the November 3rd election was the most secure in American history.” Trump subsequently fired the agency’s leader, Christopher Krebs, an act that prompted bipartisan criticism.

In the state of Georgia, Biden’s narrow percentage win over Trump led to two recounts –a hand recount ordered by the state and a formal recount requested by the Trump campaign. Both confirmed Biden’s victory. Trump rejected the recounts, going as far as calling Georgia’s secretary of state – a fellow Republican – and urging him to “find” enough votes to change the results in his favor, the Washington Post reported.

Trump’s actions over the past two months, culminating in the events on January 6, led him to become the first U.S. president impeached twice. On January 13, the U.S. House of Representatives passed a historic impeachment resolution that was supported by 10 of the body’s 211 Republican members.

Olavo de Carvalho, who lives outside Washington, D.C., in Virginia, claimed that “no one knows” Biden and that the president-elect “has Parkinson’s disease.”

That is false and one of many claims that Trump and his campaign, some members of the Republican Party and some conservative news outlets made about Biden’s health and mental fitness during the presidential campaign.

Biden has never been diagnosed with Parkinson’s or dementia. In a December 2019 medical history assessment, Biden’s personal physician concluded that he is a “healthy, vigorous 77-year-old” man.

Most of the claims about Biden’s mental acuity stem from his sometimes-halting speech pattern, after a lifelong struggle with stuttering. He is still fighting the speech disorder, as writer John Hendrickson – who also stutters – documented in The Atlantic.

Carvalho’s assertion comes from the work of Trevor Loudon, a New Zealand author and contributor to the Epoch Times, a far-right newspaper known for its pro-Trump stance, conspiracy theories and links to Chinese dissidents. The Southern Poverty Law Center has called Loudon a far-right conspiracy theorist.

“[Loudon] made a video about Kamala Harris, and it’s very impressive. She’s not democratic left, she’s a communist… [She] works for the Chinese government,” Carvalho said, adding that “so does Joe Biden.”

These statements are false.

In an October 2020 Epoch Times op-ed, Loudon laid out evidence for his claim that Harris has communist ties. He pointed to her “leftist parents” (who in the 60s were “active in the Berkeley-based Afro-American Association”), to her relationship with former Democratic speaker of the California State Assembly and former San Francisco Mayor Willie Brown (whom Loudon calls is a “communist sympathizer”), and to her husband.

Loudon’s claim about Harris’ husband, Doug Emhoff, is based on an article from the National Pulse, which speculated that Emhoff’s former employer, the DLA Piper law firm, employed people with ties to the Chinese Communist Party (CCP) and “advised” the Chinese Embassy in Australia and China-based companies.

PolitiFact has debunked the claims that Emhoff “represents” the CCP. “[N]one of this proves that the firm [DLA Piper] is subject to undue CCP influence. Rather, it reflects the way that business and government are intertwined in China,” foreign policy experts told PolitiFact.https://www.youtube.com/embed/RtcunSfY_70?&&&fs=1&enablejsapi=1&rel=0

Since 2016, the Epoch Times “has used aggressive Facebook tactics and right-wing misinformation to create an anti-China, pro-Trump media empire,” the New York Times wrote in an investigation published last October.

“[T]he organization and its affiliates have grown, in part, by relying on sketchy social media tactics, pushing dangerous conspiracy theories and downplaying their connection to Falun Gong [a relatively obscure Chinese spiritual movement],” the Times found.

The conspiracy theories mentioned in the New York Times article include QAnon, misleading claims about voter fraud, the Black Lives Matter movement, and, more recently, the claim that Antifa activists were behind the Capitol riot. The FBI has said there is no evidence of Antifa involvement.

In a piece for VICE News, Nina Berman and Ishaan Jhavery, researchers at the Tow Center for Digital Journalism and Columbia University’s Engineering and Journalism schools, wrote that giant flags with photographs promoting Epoch’s NTD.TV were seen amid the pro-Trump crowds on January 6.

Carvalho has been living in self-imposed exile in the United States since 2005. From his home in Virginia, he’s managed to tap into the center of the conservative movement in Brazil, mainly through his YouTube channel, which has more than 1 million followers.

Carvalho caught the attention of Bolsonaro in 2014, while Bolsonaro was a member of Brazil’s Congress. During his live-streamed, election-night victory speech, Bolsonaro displayed one of Carvalho’s books, “The Least You Need to Know Not to Be an Idiot.”

In a Washington Post profile, author Terrence McCoy reported that Carvalho “is credited by supporters and critics alike for providing the intellectual spark that ignited the rapid rise of Brazilian President Jair Bolsonaro.”

In March 2019, Eduardo Bolsonaro, one of the Brazilian president’s sons, said that “without Olavo, there wouldn’t have been the election of Jair Bolsonaro.” He made his comments during a screening of a film about Carvalho at the Trump International Hotel, in Washington D.C.

Carvalho continued to exert influence on the new Bolsonaro administration. He recommended Ernesto Araujo, a career diplomat who shares Carvalho’s conspiratorial theories about globalism and the “New World Order,” to the position of foreign minister. Bolsonaro followed the recommendation.

Carvalho and Bolsonaro had a falling out in June 2020, after the president failed to “defend” Carvalho when he was sued for making false accusations of pedophilia against Brazilian singer Caetano Veloso.

By Mariana Castro, for Polygraph