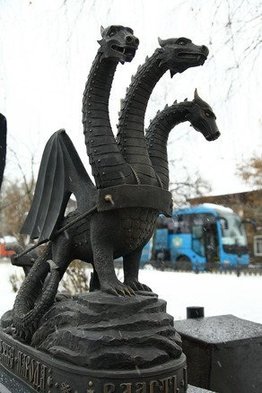 In Russia today, monuments more than memoranda have become the most favored way of expressing political views at least in part because, however controversial many of them inevitably become, statues allow for multiple interpretations or alternatively for none at all.

This weekend brought two examples. In the first, Vladimir Putin dedicated a statue in Russian-occupied Crimea to Emperor Aleksandr III, the embodiment for many of imperial cruelty but for others the rare tsar who did not embroil the country in a foreign war.

And in the second, officials in Kostroma erected a statue of a three-headed dragon, something they said symbolized the three branches of a free and democratic government (legislative, executive, and judicial) but that passers-by may view as simply an ornamental design.

On the URA news site, two of its journalists, Mikhail Bely and Stanislav Zakharkin discuss “why in Russia so many monuments are being erected” and point to the numerous cases like Aleksandr III where those putting up the monument may want to convey one message but those looking at it will take away a very different one.

Aleksey Kurtov, president of the Russian Association of Political Consultants, tells them that there is another subliminal message being delivered by the kind of monuments going up in Russia now. The majority of those erected recently are devoted to a particular individual rather than to any idea.

That reflects the interests of the state which views heroes as the best model for emulation; and thus, even though few talk about it, these statues to figures like Aleksandr III work one way ideologically while those to ideas of democracy and division of powers work in an entirely different way – and one that the current Russian regime has little interest in cultivating.