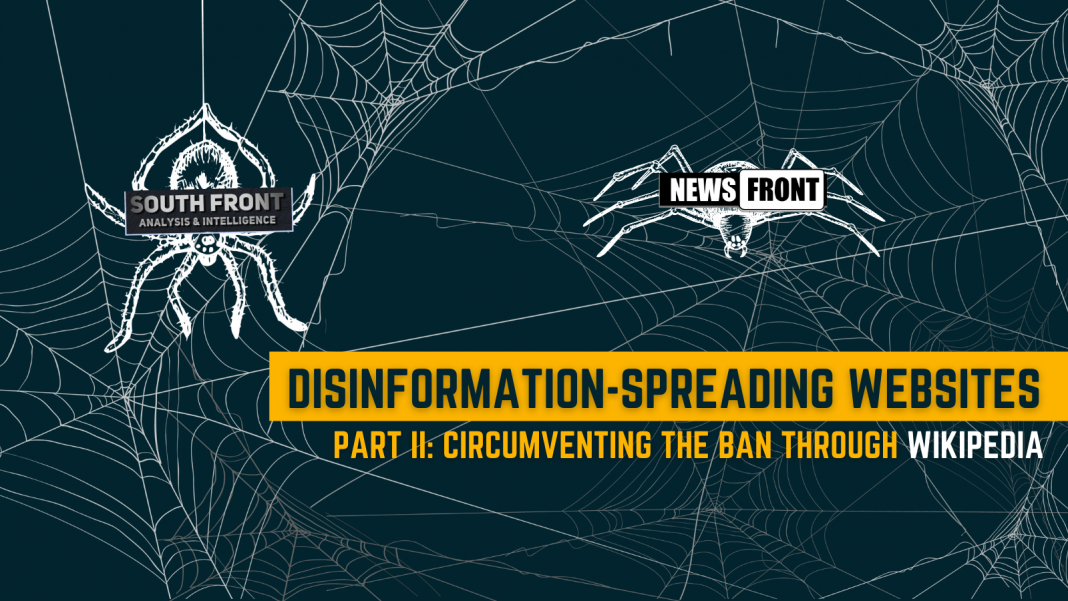 Circumventing the ban through Wikipedia

The Facebook accounts affiliated with disinformation-spreading websites SouthFront and NewsFront were taken down last year. But the websites managed to attract visitors anyway, be it through masking the links or elbowing their way through to Wikipedia.

In the first part of the EUvsDisinfo research, we showed how a Facebook takedown performed last year had only marginally influenced the overall traffic to two disinformation-spreading websites, SouthFront and NewsFront. In the second part, we look at various ways how the websites attempted to sidestep the ban.

Strategies to circumvent the takedown

It seems that both SouthFront and NewsFront have made efforts to sidestep the ban.

The research by the GMF’s Alliance for Securing Democracy and the Institute for Strategic Dialogue focused on strategies applied by NewsFront to bypass the takedown. One of them was mirroring; it consisted in creating a network of websites that were identical in content and form – including photos and other visuals – to the original NewsFront site, but used innocuous domain names. That way, the links to the mirror sites could be still shared on social media around the world, even though the NewsFront website was banned from Facebook. NewsFront went further with its efforts, putting in motion a network of online personas, who only shared NewsFront mirror sites content on their fake profiles. As the Alliance for Securing Democracy showed, this network had the potential to reach over 3.4 million people in seven languages (Bulgarian, French, Georgian, German, Russian, Slovak, Spanish).

Other tactics that NewsFront relied on was seeding content on blogging platforms. There, in line with the information laundering scheme, the content looked similar to the one pushed by the NewsFront website, in order to spread the same disinformation messages. At the same time, the form was adjusted to fit the recipients’ needs.

Finally, the third tool used by NewsFront was cloaking (or masking) domains. It means that links shared on social media by accounts connected to NewsFront looked as if they were to another website, whereas in fact they were only used as a redirect to the actual domain of NewsFront. The ISD mentions in its analysis that at least one of the cloaking domains – French ambassadeur.info – remains active; until January it had been posted at least 6,172 times in 161 different Facebook groups.

SouthFront, as our own research shows, applied different tactics, using different platforms to promote links to its website.

We analysed the website’s traffic source domains to find out how different websites, platforms or services contributed to the recovery in Q2 (when the takedown took place) and the following quarter Q3 of 2020.

What stood out in our research was the fact that in 2020 the number of SouthFront links added to Wikipedia increased by 397%, and most links were added after the takedown (especially in the second half of the year). Most of the links added to Wikipedia concerned conflicts in the Middle East. Worth noting is that apart from references in the main encyclopaedic articles, links can be added on Wikipedia as part of discussions about the content of these articles. We were not able to confirm where exactly these newly added links appeared on Wikipedia.

When impacted, outlets tried creative new ways to circumvent the ban – from reallocating resources to recover from the effect of the takedown to compensating losses incurred from Facebook takedown by attracting traffic from alternative sources.

Social media takedowns can work. However, their implementation in the case of SouthFront and NewsFront appears to have had a marginal effect because the targeted outlets applied countermeasures, such as mirroring content on different websites, cloaking (masking) domains and seeding content on other platforms. Wikipedia emerges from our research as a surprising, vulnerable spot: a relatively well-trusted source which dubious actors have flooded with untrustworthy links.

Needless to say, more research is necessary to understand the constantly evolving tactics of disinformation and manipulation. But it is contingent on better understanding how the social media platforms perform the takedowns. Without access to insights directly from Facebook, our understanding remains limited.

Knowing SouthFront and NewsFront’s strategies may also help us foresee their approach to the new US sanctions. Their reaction to the takedowns shows that they will search for ways to circumvent any ban in an attempt to influence the democratic debate.