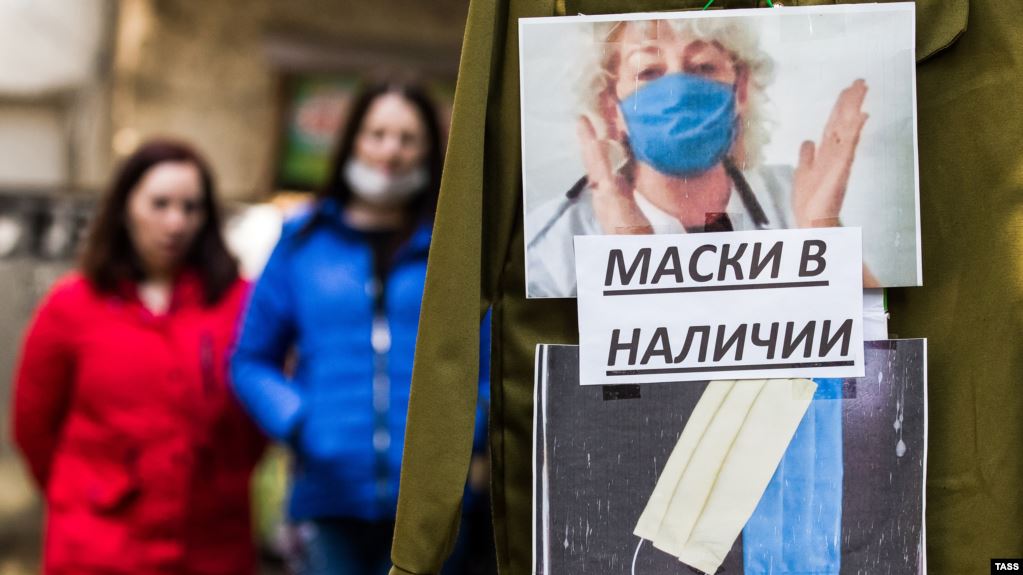 Dmitry Peskov
Russian Presidential Spokesman
“Crimea is part of the Russian Federation, with all the consequences this entails. Russia doesn’t have to leave Donbas soil since it had never entered there.”
Source: TASS, April 8, 2020
False
Russia continues to occupy Crimea, and evidence of Russian involvement in Donbas is overwhelming.

On April 6, National Public Radio’s website published an opinion piece co-authored by three former U.S. ambassadors to Ukraine: Steven Pifer, John Herbst, and William B. Taylor. They argued that the COVID-19 pandemic “could present an unexpected opportunity both to resolve the only hot war in Europe and to address Russian President Vladimir Putin’s assault on international norms of behavior.”

“In close cooperation with the leaders of Germany, France and Ukraine, President Trump should propose to President Putin an end to the fighting, the return of Donbas and the international border to Ukrainian sovereignty, and the removal of the sanctions imposed on Russia for its Donbas intrusion,” the three former ambassadors write.

They also obliquely refer to restoring Ukrainian sovereignty over Crimea, which Russia annexed in March 2014: “If Putin were willing to withdraw from Crimea, the other sanctions imposed against that illegal annexation could be lifted as well.”

The Russian state-owned TASS news agency quoted presidential spokesman Dmitry Peskov, who said: “Crimea is part of the Russian Federation, with all the consequences this entails. Russia doesn’t have to leave Donbas soil since it had never entered there.”

Both claims are false.

First, the international community considers Crimea a Ukrainian territory occupied by Russia. An overwhelming majority of United Nations member states recognize Crimea as part of Ukraine, and the U.N. passed a resolution in 2016 recognizing Russia as an occupying power in the Crimea.

The International Criminal Court has deemed the occupation of Crimea an “international armed conflict between Russia and Ukraine.”

Peskov’s claim that Russia never “entered” the Donbas flies in the face of overwhelming evidence in the form of open source intelligence and eyewitness testimony, including from Russian soldiers who fought in the Donbas. Moreover, while Putin has not openly acknowledged his military’s involvement in Donbas, he obliquely did so during his annual media conference in December 2015.

“We never said there were no people doing military-related business, but that doesn’t mean there are regular Russian troops,” Putin said.

In fact, that statement contradicted one earlier by Putin: He previously denied sending forces into Donbas on “military-related business,” despite the fact that regular Russian troops were involved in two major battles there – in Illovaisk in 2014 and Debaltseve in 2015.

The reaction to the op-ed from other Russian officials was harsh. On the same day of Peskov’s comments to TASS, Russia’s state-owned RIA Novosti news agency published a long piece with responses from the Kremlin and Russian politicians, some of whom are based in occupied Crimea.

Sergei Aksyonov, now head of the Russian occupation government in Crimea, also reacted harshly to the op-ed by the former U.S. ambassadors. Aksyonov, who played a key role in the annexation of the peninsula in 2014, wrote on his personal Facebook page that the ex-ambassadors were “dreaming,” and that the American political class was confusing “fantasy and reality.”

Aksyonov’s rise to power in Crimea might be described as “fantastic.” He became a deputy of the region’s local parliament in elections in 2010, when his party only won 4 percent of the vote. On Feb. 27, 2014, Aksyonov entered the Crimean parliament building after it had been seized by armed men and began engineering a “referendum” led to Crimea’s annexation by Russia. It subsequently emerged that the armed men who seized the parliament were Russian special forces.

Dmitry Belik, a deputy in the State Duma (the lower house of Russia’s parliament) from the Crimean city of Sevastopol, said the three former U.S. diplomats were wearing “rose-colored glasses.”

“They simply do not know our national mentality, do not want to learn our history, and therefore they rely on the principles of pressure in relation to our country,” Belik said. “Russia has seen a lot, and has already experienced something that others have never dreamed of. And its entire history has been under Western sanctions.”

Belik’s version of Russian history omits the fact that the Soviet Union collapsed under political pressures, losing all of its constituent republics, and the period of 1991-2014, during which Russia was not under any kind of Western sanctions.

The harshest criticism of the former U.S. ambassdors’ op-ed came from Sergei Tsekov, a member of the Federation Council, the upper chamber of Russia’s parliament, from Crimea.

“Some general dementia has immediately taken three former ambassadors – there is no trace of even elementary logic in their statement,” he said.

Ekaterina Altabaeva, a member of Russia’s Federation Council from Sevastopol, said: “The [coronavirus] crisis not only did not create the conditions for Crimea to return to Ukraine, but, on the contrary, created the conditions for lifting the sanctions that were illegally imposed on Russia, the peninsula and its inhabitants.”

Altabaeva’s claim that sanctions on Russia are “illegal” have been a common refrain among Russian politicians since 2014. It is false. Most experts agree that Russia’s annexation and occupation of Crimea was illegal.