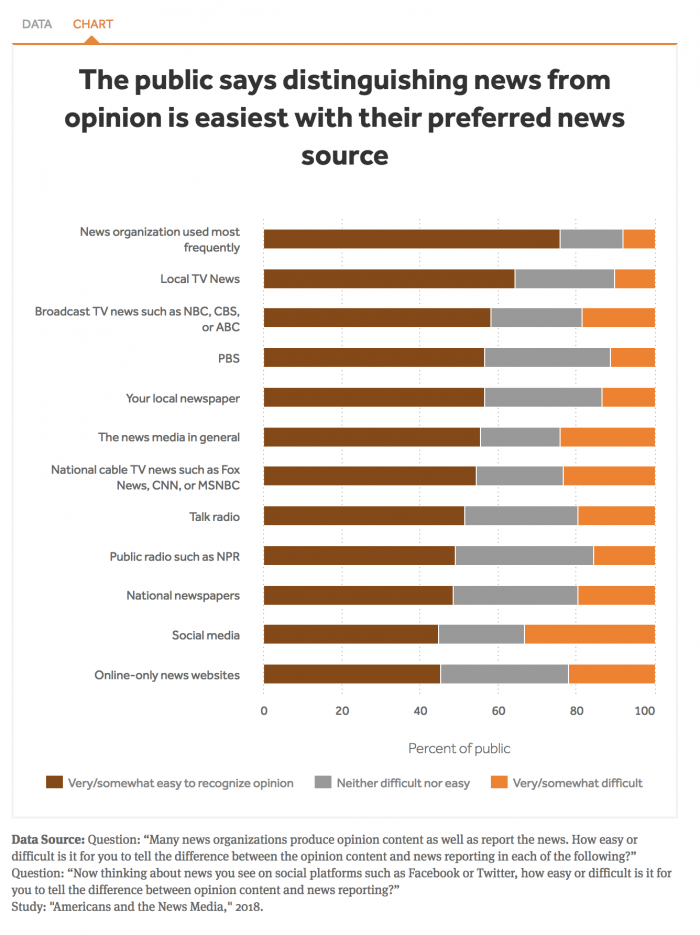 Only 43 percent of Americans find it easy to distinguish opinion from news on digital news sites or social media, according to a survey from the American Press Institute. But the job gets easier when they’re consuming media from publications they’re most familiar with.

Earlier this year, API asked Americans about their relationship with the news media, polling both the public about journalists and journalists about the public. (A separate study from Pew Research earlier this month found that 57 percent of American social media users expect the news on social media to be inaccurate.) Building off that work, API pulled out these stats about sorting opinion and news on different platforms: Journalism jargon doesn’t help. (I doubt I am the only one who received a “stupid question: What’s an op-ed?” message in the flurry of the anonymous New York Times op-ed.) This chart shows the percentages of “yes” responses when asked, “How familiar are you which each term of concept?” And 63 percent of respondents said “news is most useful when it mostly reports facts with some background or analysis”:

That means people want news with some context or background — more than just facts — but many think what they’re seeing has veered too much toward opinion. This finding, coupled with the fact that people have a hard time making distinctions, is another indicator of a problem.

You can read the full report, with suggestions for steps to take and examples of news organizations that help to dispel confusion, here.