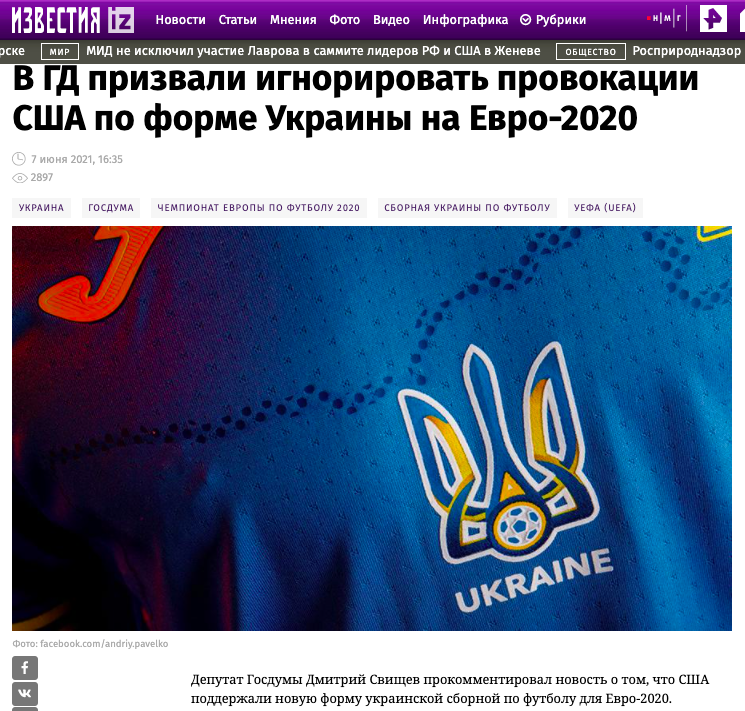 Ukraine presented the new uniform of the national football team for the Euro 2020 championship.  The yellow jersey features an outline of the map of Ukraine including Crimea, as well as the slogan “Glory to Ukraine! – Glory to heroes!”  Russian media jumped all over this event, generating a wave of distortions and manipulations, which we subjected to a StopFake truth autopsy.

A popular and ever present narrative of the Russian propaganda machine is that Ukraine is controlled from outside and the first reactions to the new football jersey is exactly on message: someone made Ukraine do it. In the words of Russian Duma deputy Svetlana Zhurova “What Ukraine is doing right now shows 100% that someone prompted them do this and they are doing it!”

The Izvestia newspaper saw the hand of America behind the new jersey with a headline that hailed “State Duma urges to ignore US provocations about Ukraine’s Euro 2020 football uniform”.

Another line took the manipulation in a different direction –  as everyone has already forgotten about Ukraine, the jersey is a provocation to bring back attention to the country.

The new uniform is not only a provocation by Ukraine but also a manifestation of its Russophobic policy which poses a challenge to the European community. The chairman of Plekhanov Russian Economic University Political Science and Sociology Department Andrey Koshkin called the jersey a provocation against Russia and accused Ukraine of trying to annex a part of Russian territory.

The outline of the map of Ukraine on the football jersey includes Crimea, the Ukrainian peninsula Russia occupied and annexed in 2014.

Russian footballers chimed into the brouhaha as well, offering Ukraine advice as to what the footballers’ uniform should really look like. Russian midfielder Alexander Mostovoy for example, declared that it would have been enough for Ukraine to feature its national colors and the team emblem on the back.

Another wave of stories concerning the jersey underscored that Crimea belongs to Russia and became part of the Russian Federation as a result of the manifestation of Crimean free will.

“Ukraine has no legal rights to the peninsula and no intended symbolism will help in this, declared Pavel Danilin, Center for Political Analysis director, adding that very soon international recognition of Crimea will become a reality.

RIA Novosti called the inclusion of Crimea on the Ukrainian jersey “phantom pains”.

Despite the confidence of the Russian side that UEFA will ban the new Ukrainian national team jersey, the organization approved the uniform “in accordance with the applicable rules regarding equipment”.

The popular rallying slogan “Glory to Ukraine! – Glory to heroes!” also elicited quite a pique from the Russian media.

Russian Foreign Ministry spokeswoman Maria Zakharova dedicated a separate post on social networks to the topic calling the slogan a “nationalist chant”. According to Zakharova, this slogan “is associated with the Ukrainian Insurgent Army (UPA), nationalist leader Stepan Bandera and their crimes during the Second World War,” and now Kyiv wants to “distance this slogan from its inconvenient origin and fill it with new positive meaning”. She also states that the slogan is “a copy of the famous German National Socialist greeting.”

StopFake has debunked earlier Russian claims that Glory to Ukraine is a Nazi greeting. According to historians, this greeting was already in use by the cavalry regiment of the Ukrainian National Republic, the Ukrainian state which declared its independence in 1918. Historian Yuriy Yuzych writes that the slogan “Glory to Ukraine! – Glory to all the earth!” was used by the Kharkiv Ukrainian student community at the end of the 19th century.

Even Hitler made it into the discussion. The NSN television channel web site quoted Ruslan Balbek, a pro-Kremlin Crimean Tatar supporting the Russian annexation, who declared “If UEFA say so, they’ll even put Hitler’s portrait on their jerseys”.

Ukraine’s new national team football jersey demonstrated how one Ukrainian event can bring on the entire Russian propaganda arsenal, unleashing well tested disinformation narratives that have been formulating Ukraine’s image for the Russian audience for years.