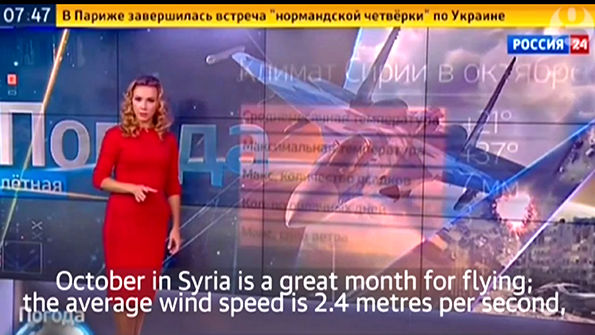 RUSSIA’S behaviour in Syria resembles the fable of the scorpion who promises not to sting the frog that carries him across the river, but does so anyway—because it is his nature. The list of foreign powers stung by Russia continues to grow. This week Turkey protested after Russian fighters intruded into its airspace, drawing a rare admission of error from the Kremlin. The two countries’ relations are deteriorating as the Russian presence frustrates Turkey’s goal of toppling the regime of Bashar al-Assad. One might surmise that Vladimir Putin’s deployment of Russian forces in Syria is simply the latest in a series of provocations designed to irritate every Western-aligned country possible.

Curiously, Russian observers say the real goal is the opposite: not to alienate the West but to force America to recognise Russia as an equal partner, thereby overcoming the isolation caused by the war in Ukraine. The fight against Islamic State (IS) is intended to forge common ground between Russia and America. “This is an attempt to turn the page and achieve reconciliation with the West not by crawling to it on its knees, but by presenting Russia as an influential and indispensable power,” argues Alexander Baunov of the Carnegie Moscow Centre, a think-tank.

The Russian audience can be forgiven for feeling confused. For the past year it has been told that America is an enemy sponsoring fascists in Ukraine, bent on undermining Russia’s sovereignty. Now it is being told that Russia and America are on the same side in the battle with Islamic terror.

While most Russians enjoy watching the televised drama of their country standing up to America, they are in no mood for real isolation and economic sanctions. Mr Putin’s brinkmanship in Syria is meant to reaffirm that he still commands attention and respect in the world. Syria also serves as cover for scaling down Russia’s activity in eastern Ukraine: this week the Russian-backed rebels in Donbas called off their earlier plans to hold elections in defiance of Kiev, and the conflict has been frozen (at least for now).

The new war is being presented on Russian television like a blockbuster film. News programmes savour dramatic shots of Russian military jets roaring past the camera. Even Russian weather forecasts have become part of the show. Weathermen report the favourable bombing conditions in Syrian skies—followed immediately by footage of explosions recorded by cockpit cameras.

The show is certainly proving popular. Two weeks ago only 18% of Russians supported the idea of military intervention in Syria. Now the figure has risen to 46%, according to the Levada Centre, an independent pollster. Lev Gudkov, the centre’s director, says the figures show the effectiveness of war as television spectacle. But the prospect of war also causes apprehension and fear, laden with memories of the Soviet defeat in Afghanistan.

As with the conflict in Ukraine, Russian television has created a virtual reality that excludes any suffering by Russian soldiers. But unlike in Ukraine, where the fictitious enemy (“Ukrainian fascists”) was invented by the media, in Syria Russia faces a real enemy that cannot be switched off. A Russian airbase is vulnerable to insurgent attack. Alexander Khramchikhin, a Russian military expert, argues that if Russia really wants to defeat IS, it will have to commit far greater resources. Meanwhile, in the face of Russia’s economic difficulties, the domestic political effectiveness of virtual-reality warfare has limits. “They feed us propaganda,” says Tamara Vasileva, a pensioner from a small town in the north of Russia, “but you can’t spread propaganda on a piece of bread.”

Hushing Up Is Also Lying