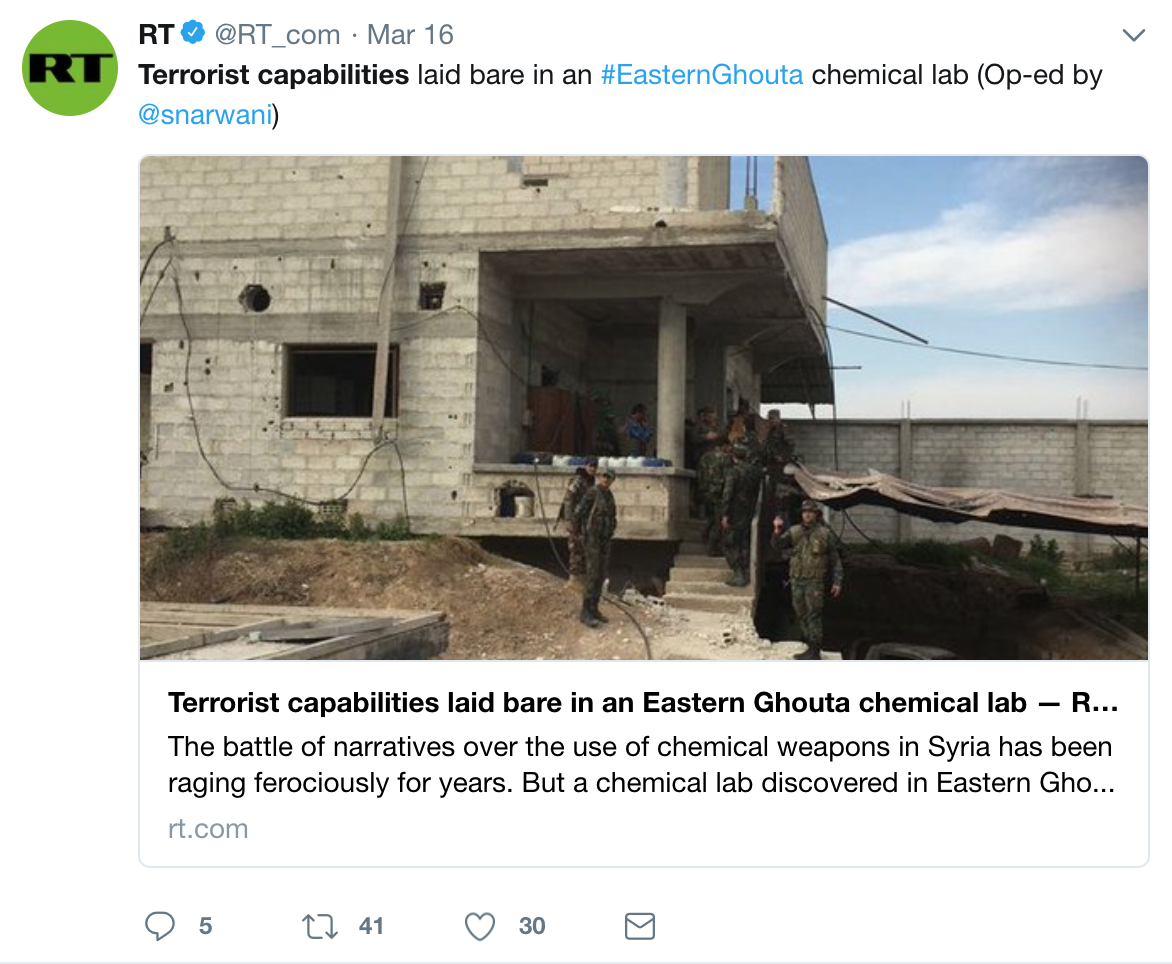 If Moscow wants its Syrian allies to skirt the blame for chemical attacks, they’re going to have to come up with some better evidence than a few beakers and boilers in a dingy basement.

Russia and Syria say the alleged chemical weapons attack in Douma, Syriawas all a rebel-staged fake— and promise that they’ve got the evidence to prove it. But one of the pieces of evidence they say shows a secret rebel chemical weapons lab shows nothing of the sort, experts say.

At the center of the claim is a building in Al-Shifuniya, in East Ghouta where the Syrian military says it found “a chemical warehouse used to manufacture chemical weapons against the Syrian Army” and a “research lab for experiments” run by the Islamist militant group Jaish al Islam in mid-March. The allegation tracked with an uptick in Russian claims about a rebel chemical weapons “false flag” in the making shortly after the Trump administration was considering military options to respond to the Assad regime’s alleged use of chlorine gas in early 2018—including an alleged February 25 chlorine attack on Al-Shifuniya itself.

Russia’s defense ministry even seized on the facility and included it as evidence in a briefing denying Russian complicity in the poisoning of Russian double agent Sergei Skripal—without directly tying to lab to the attack in Salisbury, England. “After liberating an array of local communities in Eastern Ghouta, Syrian government forces located a clandestine workshop for the production of chemical munitions,” a Russian defense ministry slide with pictures of the facility reads. “[It is clear] that the workshop for chemical munitions is for provocational measures, as with previous impositions of guilt on Syrian government forces for employing chemical weapons.”

Videos of the Al-Shifuniya facility show fliers with the logo of Jaish al-Islam, one of the Islamist militant groups that held control of the the northeast Damascus suburbs.

The videos also show equipment seemingly from commercial companies, like an air plant marked as the product of Hill-Rom, a medical device maker, a large metal container with a “Flainox” label, the name a fabric dyeing equipment firm, as well as several boiler-like metal containers in the basement.

Experts say it’s not clear what the facility in question was used for, but they are convinced that it couldn’t have been used to produce either the chlorine gas or sarin nerve agent that many believe were used in the fatal attack in Douma which prompted the U.S., France, and the U.K. to strike Syria on Friday.

Asked if the equipment in the videos of Al-Shifuniya could be used to produce chlorine gas, Cheryl Rofer, a retired chemist with experience working on chemical weapons and environmental issues at Los Alamos National Laboratory, said “no.”

Chlorine is typically produced with electrolysis cells using either large amounts of salt or hydrochloric acid as feedstock and lots of electricity to produce and recover the gas.

“Chlorine is a gas at room temperature and pressure,” explains Clyde Davies, a former research chemist. “Its ‘critical point’, below which it can be liquefied, is about 144 C, but it needs high pressure to do this, which is why it is stored and shipped in gas cylinders. Just like the ones that were dropped on Douma.”

The process can be dangerous and requires special equipment, according to the UN Joint Investigative Mechanism. “In the light of its corrosive and toxic nature, expertise and specialized equipment are required for its safe handling. For example, to transfer chlorine from a 1 ton container to smaller containers, a specialized filling station is required.”

And this facility isn’t anywhere near “the scale needed for the attacks that have been observed,” Rofer wrote in an email. “All of the equipment, except for the boilers, is at laboratory scale. But the more fundamental problem is that none of the equipment is what is needed to produce chlorine and compress it into the cylinders that [investigative journalism outlet] Bellingcat has documented” in Douma.

Nor could the facility to be used to produce nerve agents. “For sarin production, all of this would have to be much more contained than it is,” Rofer writes. The ramshackle construction in the facility would’ve put anyone nearby at high risk of exposure, which can cause harm at very low concentrations. “The housekeeping is terrible,” she adds. “When you’re working with chemicals, housekeeping is more than aesthetic; it’s necessary to avoid injuring yourself. If the setup in the [picture of glassware published by RT] was used to manufacture sarin, the operators are dead.”

Syrian military personnel also pointed to presence of allegedly Saudi chemistry textbooks and a poster as evidence of a foreign hand in the purported chemical weapons facility. As a Syrian military officer points out in the video, a poster with a list of chemicals on it bears the title “The reality and horizon of the Saudi Chemical Industry.” It’s unclear where the poster come from or what it depicts, but it shares the name of a report on Saudi Arabia’s chemical industry produced by the Saudi Consulting House.

The Al-Shifuniya facility also showed some limited evidence of conventional homemade explosives (HME) production. Items listed on a whiteboard in videos of the facility include perchlorate, aluminum powder, nitrocellulose—chemicals normally associated with HME and rocket propellant—as well as “PETN,” an acronym for pentaerythritol tetranitrate, a common HME in militant improvised explosive devices (IEDs).

“These are used to prepare explosives,” a Syrian officer explained in the video, claiming the explosives are mixed with chemical weapons.

Aluminum powder, often used in the production of ammonium nitrate and aluminum explosives, and nitrocellulose are frequently traded by would-be bomb-makers in rebel arms markets in Idlib province in northwest Syria.

Still, while the compounds written on a board are often associated with HME, the facility itself doesn’t appear consistent with other IED factories used for churning out large amounts of bombs. “The blue and yellow jugs are traditional IED main charge containers in Iraq/Afghanistan/Syria etc. But I’d expect bulk quantities of fertilizer, sugar, etc if they were making lots of HME, and I don’t see that. No wires, batteries, caps, triggers, etc to make IEDs,” Brian Castner, a former U.S. Air Force Explosive Ordnance Disposal officer and an Iraq War veteran, wrote in an email.

But perhaps the oddest thing about this Moscow-Damascus push to tie chemical attacks to a particular lab is how unnecessary it all is. Chlorine is a widely-used industrial chemical, after all. And reports by the UN’s Joint Investigative Mission, charged with investigating allegations of chemical weapons use, has noted that chlorine “is available to all parties in the Syrian Arab Republic.” Russia could’ve easily stuck to hiding behind the—admittedly thin—rhetorical shield of chlorine’s availability.

Russia and Syria have tried, time and again, to push a storyline that rebels have carried out false flag chemical attacks with secret stashes of foreign-supplied weapons. It hasn’t helped Damascus wriggle out of responsibility for previous chemical weapons attacks before, as a handful of UN investigations show. If Moscow wants its Syrian allies to skirt the blame for the alleged chemical attack in Douma, they’re going to have to come up with some better evidence than a few beakers and boilers in a dingy Ghouta basement.

By Adam Rawnsley, for Bellingcat

Adam Rawnsley is a Philadelphia-based reporter covering technology and national security. He co-authors FP’s Situation Report newsletter and has written for The Daily Beast, Wired, and War Is Boring. You can follow him on Twitter at @arawnsley.

This story was published in conjunction with The Daily Beast