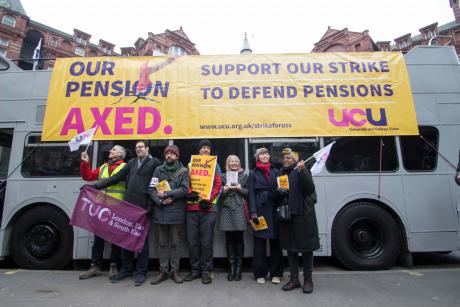 A leading British newspaper is using patchy “evidence”, insinuation and intrigue to vilify the UK university protest. We know these techniques well from our research into Russian propaganda.

This is an open letter in response to an investigative article in The Times entitled “University activists have been plotting the strike for seven years”. The article appeared after day two of an ongoing strike by University and College Union university lecturers against a pension reform (which, in our case, would mean a loss of roughly 40% of our pensions).

The article, by Paul Morgan-Bentley, Head of Investigations at The Times, describes a plot radical union leaders hatched for at least seven years as to how to organise a UK-wide strike. The article’s main hook is a YouTube video showing Matt Waddup, Head of Policy and Campaigns at University College Union, discussing possible strike actions and how to escalate them in 2011.

For Friday the week after next I need to prepare a lecture on propaganda and fake news for a course on media sociology. It is the first time that I am teaching the course and I have not gathered yet any course materials together. I have been working on media-related issues for years, together with Ilya Yablokov, a colleague from Leeds University, which is what qualifies me to teach this course.

Our research has been mostly focused on Russia. To speed up things when preparing this lecture (I am desperately overworked, as most lecturers are), I thought I would ask colleagues to help me find UK-based examples (preferably not from The Daily Mail, it is too obvious) — to appeal to my students.

Yesterday morning, I received an email of the The Times top stories via my subscription — it featured your article. It was a godsend — and written by Head of Investigations at The Times, no less.

My colleague Ilya helped me this to prepare the course material. We decided to nevertheless include Russia-related material. After all, western media often criticise Russian president Vladimir Putin for waging a war of words against the country’s opposition (and, of course, doesn’t limit himself to words).

Moreover, your article reminded us a lot of the approaches state-affiliated media in Russia have been taking in recent years, especially the notorious films made against the Russian opposition with screaming titles such as “Anatomy of protest”. Five points in particular caught our attention:

– How you elaborate on the “leaders’ radicalism”

First of all, there is the question what your article actually is about: It is built around this video which has been online since October 2011. Neither of us has ever conducted investigative journalism, but we would have thought it involved more than using a video that has been available for more than seven years. But then again, investigative journalism was perhaps not the task on this occasion.

1) Demonise the opponent by referring to their radicalism

In winter 2012, the punk band Pussy Riot performed a song in a major Russian-Orthodox cathedral in Moscow. The song was called “Virgin Mary, Drive Putin away”.The performance triggered a moral panic once the Russian media started depicting the young women (three of whom were arrested and jailed) as tools of western intelligence conspiring to destroy Russia from within.

Matt Waddup “began his career at the hard-left Rail, Maritime and Transport union.”

The other radical, Ed Bailey, who is Waddup’s deputy at UCU, “posted a photograph from a demonstration in 2009 showing a sign denouncing ‘Israeli terrorists’.”

Waddup has liked on Facebook “a number of far-left groups, including “Young Communist League — Britain”.”

Waddup also “linked to pro-Soviet groups online, including one that pledges to ‘establish a post-capitalist, communist society’.”

“Other groups he [Waddup] has liked online include those backing Momentum and Jeremy Corbyn.”

With this line of argumentation and evidence, you have made us both very worried about what we ever might have “liked” somewhere on the web!

But back to Russia.

Back in 2012, TV presenter Arkady Mamontov called the Pussy Riot performance a “relapse into neo-Bolshevism”, implicitly raising the possibility of new anti-Church pogroms under Soviet power and the destruction of the Cathedral of Christ the Saviour in the same manner as the Bolsheviks during the 1930s

More frequently, Russian state-affiliated media relies on homophobia as the major element of “othering” the opposition. Links to LGBT issues are associated with the imperial west and western decadence — see, for example, this episode of “Special Correspondent” on Russia’s Channel One.

In the aftermath of the scandal around Pussy Riot, who sympathised with Russia’s LGBT movement, the Russian NTV channel heavily edited an interview with an LGBT activist to give the impression that they said “gays want to destroy the Cathedral of Christ the Saviour”.

“Footage shows that he [Matt Waddup] has been planning strikes over lecturers’ pension benefits for seven years, telling academics that industrial action should escalate gradually until ‘real damage is done’.”

We have read your article several times and yet we still cannot understand what the specific context and issue around which Matt Waddup gave this speech. Is it possible that you left this out? But not in order to create a link to the current 2018 protest, which, if you had explained the context, wouldn’t be so suggestive anymore? How much could Matt Waddup have known seven years ago about the latest pension plans?

What makes this a little creepy is that it is a classic element of conspiracy theories: to artificially create a causal link where there is none.

The “Provocateurs” show fit into an organised campaign to discredit and stigmatise protests in 2012.

The Russian media are full of examples. For example, several television shows, broadcast in 2012 under the screaming title “Provocateurs”, had one goal: to convince the Russian public that Pussy Riot, mentioned above, was not just “a performance”. Russian journalists portrayed them as part of a century-old plan developed by the west to destroy Russian statehood and undermine trust in Russian sacred relics.

This is a favourite method of Russian media. Up and down and for years on end they have told us that protesters only take to the streets if they are either fooled by their leaders (who are getting paychecks from the CIA), or get paid themselves (again, usually by the US).

Of course, you don’t go that far, but there is an element of it: we lecturers are led by radicals, right? Are you saying we would not strike if it wasn’t for them?

4) Depict a cunning plan of an internal enemy

The master narrative in Russia, developed and spread by politicians and pro-Kremlin intellectuals, is about an enemy of the people aiming to destroy the country in the interest of an external force. A recent example for this is Alexey Navalny, a leading Russian opposition leader who became famous thanks to (truly) investigative reports into the cronyism of Putin’s regime and its political elite. In 2014, Navalny published an op-ed in the New York Times. One of the state channels immediately accused Navalny of treason, calling him an American agent and US “inside man” who reported on his fellow countrymen.

In your article, Matt Waddup is not led by an external enemy, but by his radicalism. Plus, he is cunning, as we learned by watching this video you found:

“He [Waddup] described tactics — which have been used over the past seven years — of gradually increasing pressure on university chiefs by “escalating sustained industrial action”. Lecturers were told they should initially refuse to do work outside their usual hours. If vice-chancellors still would not talk, strikes would then begin at individual campuses ‘to hurt them’. Eventually the plan would be to boycott marking and eventually final exams.”

“The UCU’s tactics are similar to those used by the RMT, including timing strikes to cause maximum disruption and building to a climax over a number of weeks.”

Again, let us go back to the Pussy Riot case and quote the notorious Arkady Mamontov: “They wanted to disrupt society, to divide it and split [it]. That is what the organisers of this horrible provocation wanted to achieve. They hold nothing sacred.”

“Millions of students are not being told whether or not lectures will take place, with academics staying silent until the last minute to cause chaos.”

One of the leaders is “a former rail unionist and a communist supporter who pledged to ‘dance on Margaret Thatcher’s grave’.”

Just like in Russia, it seems, nothing is sacred.

Is there anything we might have missed? Please let us know.

There is one thing for which we couldn’t find a Russian equivalent — although, given how notoriously sexist Russian society is, there should be plenty of examples.

“Ms Hunt is the public face of the organisation but works closely with Mr Waddup, who has been described as her ‘guru’”.

Strangely enough, according to our search, neither Pussy Riot nor current Russian presidential candidate Ksenia Sobchak have been depicted as puppets of some guru, rather than being able to think for themselves.