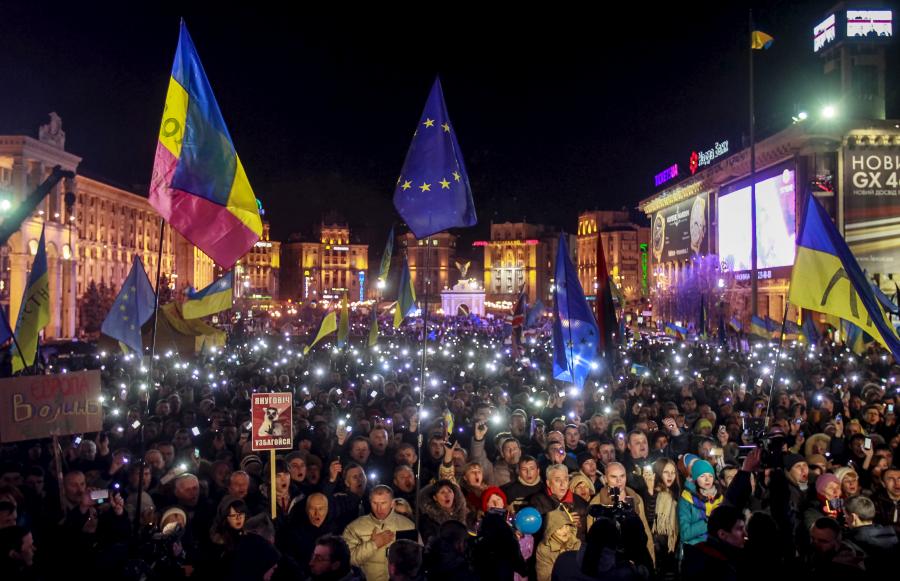 Contrary to the high expectations following the formation of the first post-Euromaidan government in early 2014, the practical implementation of Kyiv’s ambitious reform plans has so far been progressing far too slowly and inconsistently. With the exception of a few innovations, like the creation of a new, well-dressed patrol police, many major reforms have so far remained invisible and are still waiting to be implemented. A radical restructuring of the Ukrainian state, which seemed imminent two years ago, is only starting. In some areas, like the judicial system, they have yet to begin. Skeptics now doubt whether it is at all possible to reform Ukraine with the ruling government and parliament elected in October 2014. This is in spite of the fact that the current Ukrainian leadership is underpinned by a broad parliamentary coalition of parties unanimously and vocally supporting Ukraine’s accession to the EU and NATO at the earliest possible date.

What is the source of this contradiction? The standard explanation for this dilemma is a reference to the crooked Ukrainian political and economic elite. Without any doubt, the intertwining of Ukraine’s bloated and corrupt civil service apparatus with its notoriously exploitative oligarchs, and their influence on bought-off politicians, is a – if not the – core problem in Ukraine. However, the paradox of the present situation is that the removal of this old tumor from Ukrainian society was both the primary goal of the revolution and the dominant theme of the Euromaidan government’s post-revolutionary reform program. Oddly, the most important motivation for the attempted transformation – rampant corruption throughout all areas of the Ukrainian state – could now, as it looks, potentially be also its death knell.

For commentators loyal to Moscow or influenced by Kremlin propaganda, these contradictions do not require further explanation. In a country where a fascist putsch, ethnic cleansing, a bloody civil war, remote control by Washington, anti-Muscovite pogroms, concentration camps for Russian-speakers, etc. are – as reported in Russian state-media – possible, it should not come as a surprise if so-called reforms fail. That’s how Ukraine is!

Although today few Western observers adhere to this narrative, which in 2014 enjoyed some popularity in European public debates on Ukraine, the Russian leadership’s neo-imperial interpretation of Ukrainian contradictions continues to have subliminal consequences. The perception among many in Europe is still that the EU is not dealing with the country of Ukraine, but rather with the “case of Ukraine.” Ukraine is not a nation, but a sort of hopeless place whose impossibility of improvement has taken on mythical dimensions: incomprehensible, resistant to reform, pointless. The Kremlin and its sycophants in the West might add: Because the naïve West cut off Ukraine from its all-Russian Orthodox roots in Moscow!

However, looking more closely, one doesn’t need to revert to crypto-racist Russophilia, anti-Western paranoia, Ukrainophobic stereotypes, or pan-Slavic national mythology to explain Ukraine’s current troubled situation. The contradictory results of Kyiv’s reform efforts up to this point can be explained with rational argumentation, historical contextualization, and empirical observation. Obviously, fierce reform resistance by corrupt civil servants and shady politicians as well as their oligarchic puppeteers is a prime factor. Yet, these reactionary forces are not receiving opportunity and space to subvert post-Maidan Ukraine only because of well-known systemic and cultural defects in the Ukrainian political process.

After the revolution, the Ukrainian state’s still weighty deficits are principally co-determined by foreign factors, and their grave repercussions. Russia has conducted a territorially significant and bloody military expansion in southern and eastern Ukraine, and accompanied its armed advance with various forms of non-military warfare. This Russian occupation of territory, and hybrid war against Ukraine has caused an exceptionally severe economic crisis in Ukraine of 2014-15.

How exactly were and are these factors subverting Ukraine’s Europeanization?

Today only the most entrenched Putin sympathizers doubt that Russia has been engaged in military aggression against Ukraine since 2014. Many observers of Eastern Europe also now understand that Moscow’s bloody foreign adventure has more to do with Russian than with Ukrainian domestic affairs. Even those not closely following events in Ukraine would be able to understand the multi-faceted socioeconomic consequences that Russia’s territorial expansion has had on Ukrainian society. Ukraine has lost two economically important territories, Crimea and the occupied portions of the Donbas, whose regional economies had been important elements in Ukraine’s national economic cycle.

The annexation of Crimea and occupation of parts of the Donets Basin has been accompanied by widespread expropriation of production facilities, confiscation of state and corporate property, destruction of infrastructure, and transfer of Ukrainian industrial equipment, as well as other valuables to Russia. Moreover, this armed invasion was, and is, accompanied by multi-vectoral non-military warfare against Kyiv. This includes economic sanctions, secret intelligence operations, international propaganda campaigns, cyberattacks, diplomatic interventions, political pressure, clustering of troops on the Russian-Ukrainian border, and so on. Some aspects of Moscow’s hybrid war are not always fully understood by foreign observers, although they too, weaken both the Ukrainian state in general, and the reformist forces in it, in pernicious ways.

Moreover, in the spring of 2014, Ukraine, which had been militarily weak up to that point, began to shift substantial personnel, financial and material resources that would have otherwise been available to the civilian economy into its armed forces and military production. Instead of developing internationally competitive export industries, Ukraine was forced to convert parts of its productive capacity into a war economy. Thousands of young men were pulled or went away from their jobs to enter the army as draftees, professional soldiers or volunteer fighters. Many (mostly young) women also volunteered to help on the front – some so as even as snipers or in other fighting functions. The growing budget expenditures for the Anti-Terrorist Operation, as Kyiv calls it, in eastern Ukraine have become an oppressive additional burden on Ukraine’s public finances. Moreover, beginning in the summer of 2014, the care for thousands of injured, handicapped and traumatized soldiers, as well as help for hundreds of thousands of internal refugees from Crimea and the Donbas, added further burdens on the already financially and structurally weak Ukrainian state.

Particularly regrettable with respect to the reform agenda: Since the beginning of the war, Ukrainian civil society and diaspora in the West, highly mobilized by the Euromaidan, has no longer focused its primary efforts on the rebirth of the Ukrainian state. Instead of reforming Ukraine, the question of the state’s mere survival has moved to the forefront of concern for many Ukrainian civic groups, both inside the country and abroad. Fighting or supporting the war against Russia – instead of transforming their own country – became many revolutionaries’ mission number one.

Another large task was soon added – alleviation of the physical and psychological suffering experienced by soldiers and civilians affected by the war, as well as their families. Instead of improving legislative projects, promoting international economic ties, uncovering corruption networks, developing education programs, identifying wasteful spending, or coming to terms with contradictions in Ukraine’s national history, a large portion of the tens of thousands of activists has been engaged in work tied to the war and related efforts.

Since the Ukrainian army was resource-starved, and the state fragile after the 2013-14 revolution, Ukraine’s vibrant civil society and diaspora assumed to a significant degree the provision of medical care for victims of the war, support for displaced persons, acquisition of weapons and ammunition, procurement of other supplies (tents, bulletproof vests, first aid kits, etc.), as well the organization of accompanying charity events and fund raising. Thousands of highly engaged citizens no longer focused, as a first priority, on improving Ukraine, but rather on securing its mere survival. In place of a fundamental reform of Ukrainian society, a rapid mobilization and consolidation of the nation to defend the homeland stood at the forefront. Personnel and material resources that would have otherwise been available to advance reforms were and continue to be used to fulfill defense requirements.

This already difficult situation was soon compounded by an unusually severe collapse of gross domestic product, real incomes and the national currency, the Hryvnia, during the years 2014-15 – mainly, but not exclusively, as a result of the hybrid war. Even before Russian aggression, Ukrainians were extremely poor. But in the course of two years of heroic resistance against Europe’s largest military power, they have become the poorest people in Europe – even behind Albanians and Moldovans.

On top of this, war-related burdens on the population were accompanied by an increase many times over in power, gas and heating costs – a condition imposed by the International Monetary Fund for disbursal of its standby loans. To be sure, this painful measure has been long overdue on its own merit. Yet, this drastic macroeconomic adjustment during wartime further exacerbated the shock effect of the already severe financial and social collapse experienced by the population since the beginning of the Russian intervention. The rapid increase of these fees, under conditions of a foreign invasion and hybrid war, has hampered private consumption, investment, public health, quality of life, etc. It has also reduced the popular support for the new government, deepened divisions in the parliament’s reform coalition, and facilitated the rise of irresponsible political populism.

None of these observations can justify the slow pace of reforms in Ukraine. One could instead argue that Ukraine’s critical situation makes the reduction of corruption, cleansing of the state-apparatus, stimulation of business activity, and rationalization of public administration even more urgent. Yet, everybody with some interest in comparative democratization and economic transformation can understand that Ukraine’s current situation is exceptional. To conduct a reform project as large as is currently ongoing in Ukraine would be an enormous task by itself. Yet, its realization under conditions of a multivariate hybrid war waged by the world’s second largest military power along one of Europe’s longest land borders is a truly herculean task. To simply write off Kyiv’s under-achievement as yet another expression of some deeper defect in the Ukrainian nation would be simplistic and ahistoric, if not degrading. For the West, the current setbacks in Ukraine’s reformation should serve as an occasion to increase its pressure on Moscow, and help for Kyiv, rather than trigger Ukraine fatigue.