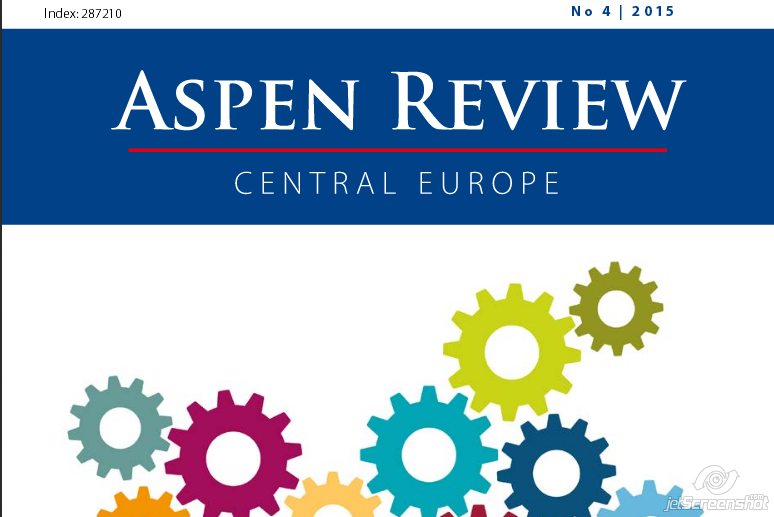 There are at least four types of Russian propaganda, each with different modus operandi in a strategically diverse environment, Andrew Wilson writes for Aspen Institute Prague.

Russia’s propaganda operation is now so vast that it is diversifying. Its institutional channels have spread from RT TV to Sputnik multi-media, to multi-lingual YouTube channels, and through the capillaries of social media. Propaganda is carefully differentiated by national (UK, US) and language (Arabic, Francophone) audiences; the message and the tone seem infinitely variable. This essay, however, argues that there are at least four types of Russian propaganda, each with different modus operandi in a strategically diverse environment.

There is less agreement on the size of the audience. Publicly-cited data is no doubt inflated by the Soviet tendency to over-claim in order to increase said levels of funding, plus the tendency to cite availability rather than actual audience, and because social media data tends to be only “likes” and “followers.” According to Maria Snegova, “RT’s official Twitter account has 815,000 followers, compared to 8 million followers of BBC World News and the 14.9 million CNN’s followers… RT has around 2.2 million fans on Facebook, compared to the 8.7 million and 16 million fans of BBC World News and CNN.”

TV figures roam widely, from RT’s claim to reach a potential audience of between 600 million and 700 million to the assertion that it only has 0.1% of the European audience.

The picture on YouTube is also mixed. According to Orttung et al., as of early 2015 “the RT flagship channel has a total of 1,471,491 subscribers,” and in one month “garnered 10,492,598 views,” but it was unclear how many “viewers [we]re coming for the helicopter golf,” rather than “staying for the Ukraine message.”

Judging the overall effect of Russian propaganda is even more difficult. The well-known analysis of Peter Pomerantsev and Michael Weiss concentrates on short-term effects. They claim that Russian propaganda is self-consciously post-modern: its purpose is not to convince or convert, but to confuse—to spread enough versions of reality to leave the target audience flailing in moral and even factual relativity, resigned to the unknowability of the world, and unable to find the cognitive basis for policy action.

Maria Snegova places contemporary Russian propaganda within the older Soviet tradition of the ‘4D’ approach: dismiss, distort, distract, and dismay. Moreover, she argues that obfuscation only works in the short-term, and undermines credibility in the long-term. The scatter-gun approach prevents coalescence around an alternative narrative. Snegova even argues that “the most successful period of RT has likely passed. Its audience has drastically shrunk following the Ukrainian crisis and unfavorable view of Russia spreading around the world.”

Both points of view are right, of course. But one might add that the key effect is in the medium term, although the medium term is very short indeed. The West’s first point of vulnerability is indeed its immediate judgment (or lack of judgment) of events. Its second point of vulnerability is Attention Deficit Disorder. In modern news cycles there is little time to actually think before the cycle moves on. For the mass audience at least, Russian propaganda only has to work until then.

Russian propaganda can still have a long- term effect, if it can affect and strengthen opinions which already exist. The second type of Russian propaganda is less about creating confusion and is more about “nudge effects.” It works by finding parties, politicians, and points-of-view that are already sure of their world-view rather than confused, and giving them a nudge—so long as these views are usefully anti-systemic.

For this type of Russian propaganda there is no such thing as strange bedfellows. Left or right, nationalist or separatist, jihadist or Islamophobic— all have featured on RT. The breadth of RT’s claimed audience is partly due to this superficial Catholicism—all are welcome, and all are welcome to talk about themselves and their pet causes. Therefore by definition there is no central narrative. Russian propaganda concentrates on supporting tropes, taking advantage of the world Raphaël Glucksmann describes in his 2015 book Génération gueule de bois [Generation Hangover]: a West that grew used to a world without existential opponents after 1989, where people protest under old slogans without new thinking, and make strange alliances and metamorphoses. Though, anti-Americanism writ large is a guiding theme for many of the other tropes: the decline of Europe, the rise of other powers, the crisis of global capitalism, and the re-definition of liberal interventionism and misguided democracy-promotion as the Empire of Chaos, to quote the 2014 book by the RT favorite Pepe Escobar.

Russia’s propaganda is Janus-faced; though a metaphor closer to home might be the double-headed Russian eagle. If the point of pluralistic propaganda abroad is to nudge or confuse, domestic propaganda is monopolistic. Its point is to create and maintain the super-majorities of Putin support that are the lodestone of the current Russian political system. A system without real ideology in a country as large as Russia can easily fall victim to bureaucratic and local interests. The famed “administrative vertical” is a myth. Thus Putin’s 89% rating is not just a sign of him heading a popularity contest; it is a tool to ensure that the actions of the otherwise disparate parts of the political system are scripted by that virtual unanimity. And it also means that 89% are signaling their loyalty to the system by formally acquiescing in its narrative (like Václav Havel’s greengrocer placing a Communist slogan in his window).

The way the data changes so predictably suggests that such attitudinal changes are in large part ritualistic and may not go deep. As in 1984, venom can be easily targeted and turned. However, Russia is not a totalitarian state. There are corrective mechanisms. Sergey Aleksashenko describes one as “the opportunity to ‘prove harmony by algebra’” (to borrow a line from Pushkin’s “Mozart and Salieri”). Once Russians “compare the stream of official information to surrounding realities and their own life experience, then it turns out that the effectiveness of state propaganda sharply drops.”

There is a much more radical corrective mechanism—the Emperor’s Clothes moment for the Bolotnaya protestors in 2011, when they mocked the naked Putin, the man behind the message, the man suddenly without a message, as just “a thief.” This sudden éclaircissement could also be called the Mourinho Effect, after one of Europe’s most successful football managers, currently with Chelsea, ironically owned by Russian oligarch Roman Abramovich. José Mourinho has copied an old trick: building a sense of team spirit, of us-against-the-world, by picking fights with everybody—other clubs, other managers, referees, the football authorities. This might work for a year or two; but most of Mourinho’s enemies are imaginary. His natural life-span at any given club is two to three years; once the effect wears off and the trick becomes obvious, even his own players may get embarrassed by higher and higher doses of artificial drama.

The political equivalent for Russia would be the moment when the domestic audience gets tired by, alienated by, or even sees through, the simplicities of this year’s propaganda show. This is where the EU and USA should concentrate their anti-propaganda efforts—correcting the Russian propaganda view of the West is fine in theory, but risks feeding the idea that this is all about hostile external powers. The aim should be to talk to the Russian audience in its own language about its own interests, and tell them their leaders are selling them short.

But the danger of some sudden éclaircissement is also the main reason for fearing that the Kremlin needs not just new stories and repeat doses of propaganda, but higher and higher doses to overcome the potential alienation effect. Particularly because the other obvious danger is that reality will bite back; and nothing could illustrate this better than the venture into Syria. Unless the strategy is to invite reality to bite back, and heighten the sense of Russia- under-siege.

In the world between Russia and the West, not surprisingly perhaps, there is a fourth, hybrid type of propaganda. 89% unanimity is beyond Russia’s reach, there is relative freedom of speech, and rival narratives, both pro-Western and loyalist, already exist. So the purpose of Russian propaganda in the “near abroad” is to create parallel alternative realities.

Not just an alternative message, but an alternative reality, with a cast of supporting characters to deliver it. In Russia, the supporting cast is less important, the media itself is now the main event. In the West, Russian propaganda may “nudge” key actors, but it doesn’t create them. In the “near abroad” of other former Soviet states, however, the media message is accompanied by a virtual chorus of pro-Russian parties, politicians, NGOs, and even Churches. The message and the medium are mutually reinforcing; parties, NGOs, media, and Church read the script, and the script makes more sense for being embodied.

Georgia is increasingly a good example of this kind of dual reality. The Saakashvili era bequeathed pro-Western parties like the UNM and media like Rustavi 2. However, there are also pro-Russian parties like Nino Burjanadze’s Democratic Movement-United Georgia and the Alliance of Patriots, pro-Russian NGOs like Eurasian Choice and pro-Russian media like Obieqtivi TV and the tabloid Asaval-Dasavali. And the Georgian Orthodox Church has been staunchly pro-Russian under the banner of “Orthodox Civilization,” at least since the purges of the 1930s. All put together, this creates a parallel universe in which Russia is Georgia’s savior, rather than the country which invaded it in 2008.

The Baltic States have a similar triad: the media world centered around First Baltic Channel; the political parties like Latvia’s Harmony Centre; and the NGOs like Native Language.

The cast is narrower in more authoritarian states. Azerbaijan has Sputnik and NGOs, but political parties matter less. Belarus has few open pro-Russian actors apart from the Orthodox Church and linked groups like Holy Rus. In Belarus the problem is that 90% watch Russian TV, and Russian social media are extremely popular.

Ukraine of course is a key battleground, not just of men and arms, but of rival narratives. Ukraine has hybrid war, but it also has hybrid politics and media—not just pluralistic, but schizophrenic. On the Russian side is the Opposition Block, which is more simplistically pro-Russian than the Party of Regions ever was. Much of the old Yanukovych elite is still intact; and many of the other oligarchs are “biddable.” There are NGOs like Viktor Medvedchuk’s Ukrainian Choice. Pro-separatist social media like rusvesna.su and cassad.net bubble away. Mainstream media like Inter TV or Rinat Akhmetov’s Segodnya newspaper currently treads a careful line, advocating both peace and patriotism, but they could easily switch to a more hostile tone.

Putin is banking on this “alternative Ukraine,” just as much as on the self-appointed leaders of the Donbas Republics, to expand the Russian voice within Ukraine. And it already has its tropes: “the new politicians are just as corrupt,” ”reform isn’t working,” “the West isn’t helping us,” and so on. The danger of roll-back in countries like Ukraine, Georgia, and Moldova, in other words, comes just as much from shifts in narrative as it does from hard security or economic concerns.

The West has woken up to the reality of Russian propaganda. So it is time to look more closely at how it actually works. In part, this is a technical question of identifying trolls and planted op-eds. But if Russia works with the grain in the West and the “near abroad” we also need to look at “the grain”—we need to know why Russian propaganda gets the audience it does. We should also understand how Russian propaganda works at home, and how dangerous it is—Russia’s actions are not explicable by “realist” analyses, because Russia is lost in un-reality. And the level of expenditure, either by Russia or by the West in response, is not really the point. The point is the message and why the message works.