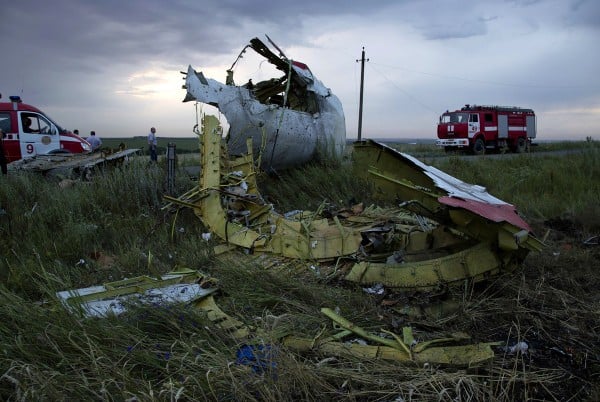 Aric, you mentioned on Twitter the Kremlin has used “at least one map” of the MoD conference last July. Could you explain it in details?

Aric Toler: The satellite images provided in the new ‘leaked’ report show Ukrainian missile defense systems located near Zaroshchenske, but these images were first provided by Russia as ‘proof’ on July 21. The images were shown in the now-infamous Ministry of Defense (MoD) press conference, in which they posed ten questions that implicate Ukraine in the downing of MH17.

The third and fourth questions (seen and summarized here) involve satellite images of Ukrainian missile defense units north of Donetsk and near Zaroshchenske. It should be noted that the image provided for Zaroshchenske is suspect, to say the least. As Kirill Mikhailov pointed out on Twitter after checking DigitalGlobe imagery, the Buk that was supposedly moved from the Zaroshchenske base on July 17 was in the exact same position on both July 2 and July 21. Either Ukraine moved this Buk system to a field, shot down MH17, and moved it to the exact same location and angle, or the images provided by Russia are incorrect (either doctored or depicting a different day than July 17).

Why do you think the Kremlin changed the main version of shooting down MH17? Why SU-25 theory is no more the №1? Why Ukrainian BUK is more profitable for Russian propaganda?

Aric Toler: This is all speculation, as I (along with 99% of the other people commenting on this) have no connection or view into the Kremlin. But you do not need these links to have a reasonable guess at what is happening—the SU-25 theory was not only absurd from a narrative standpoint, but also impossible in terms of physical laws and technical specifications. A designer of the plane even came out to say that an SU-25 could not have shot down a passenger plane at 30,000+ feet.

So, the question should not be “why is the SU-25 theory being abandoned now?” but instead “why has it taken so long to abandon the SU-25 theory?” As many others have pointed out, the July 21 MoD conference took a scattershot approach:  fire as many theories as far and wide as possible, hoping that one of them hits their mark. The one that found the most traction should have been the Ukrainian Buk theory, as it very soon became apparent that this was the only weapon that could have been used under the circumstances.

However, due to a handful of other circumstances—the misleading radar imagery, an imposter air traffic controller, and the “round holes” that looked like a smoking (SU-25) gun on the remains of MH17—the SU-25 theory caught on instead. Various actors tried their very best to turn this proverbial piece of coal into a diamond, with Mikhail Leont’ev’s satellite photo, Komsomolskaya Pravda’s “expose” of the Ukrainian pilot Voloshin, a long-winded documentary or two on Pervyi Kanal, but alas, it was not meant to be. Only the die-hards remain.

The Ukrainian Buk theory should have been used from the beginning. The SU-25 theory has an exciting narrative, but for the true Kremlin goal of muddying the waters, a consistent narrative of the Ukrainian Buk would have been effective. It’s easy to laugh at the SU-25 nonsense, but the average person who does not closely follow the ongoing MH17 narratives can easily throw up his or her hands and say, “Well, it could have been a Ukrainian or a Russian, will we ever really know?” and be done with it. Once you have to consider specific angles, areas of impact, shifting battle lines, and other complex factors, most will tune out and assume that the truth is too complex to truly know. However, with the SU-25, anyone with a half-critical mind could see the absurdity.

Aric Toler: Because at this point, everyone who wants to believe that Ukraine was responsible for MH17 will keep believing this. No one in Western Europe or the United States is going to suddenly change their mind, as Russia lost all credibility with their narratives on MH17 with the SU-25 debacle (and all of the minor scandals that came from it, including the fake satellite photo, which is fairly widely known outside of Russia watchers). Also, also I had mentioned in that Twitter post, most of the aspects of the new version have already been debunked or are well on their way. In the domestic sphere, it does not matter so much that the semi-official narrative has been that a fighter jet shot down MH17, this new version uses persuasion by intimidation with complex geometric diagrams.

It does not matter if independent military analysts in the West say that the new version’s calculations are incorrect (which has already started happening)—the stories on Vesti, NTV, et al will declare the guilt of a Ukrainian Buk, show (incorrectly dated or doctored) satellite images, and seemingly indecipherable diagrams. If you are a normal man or woman in Tula or Perm who does not obsessively follow MH17 news, why would you believe otherwise from what this story on television tells you?

Have you noted any other fakes or misunderstandings of the “Novaya Gazeta” MH-17 story?

Aric Toler: I think it is important to note what was likely the role of Novaya Gazeta here. Many have criticized them for running this story, or think that the version must be true because it ran in this publication. I do not think it is so simple. Obviously, Novaya Gazeta almost certainly had this story leaked to them from someone who wanted it printed. Well then, why did they print it, considering how critical they have been of the Russian government regarding MH17?

Not enough people have noted the last line of the article:  «Новая газета» продолжает расследование. Yes, they ran the report, and presumably in its entirety. But I expect an excellent investigation from Novaya Gazeta on the validity of this report, and I doubt that it will be favorable.

Secondly, consider the motivations for those who leaked the report—where would it be better to leak this report than one of the, if not the, strongest independent voice in the Russian media? The report gains instant credibility. Just imagine if this was published in Komsomolskaya Pravda, instead of Novaya Gazeta—no one would take it seriously.

Additionally, it had to be a domestic paper, not only because of practical concerns (the New York Times would never publish this in the same way, obviously), but because it is meant for domestic consumption. Again, if you are an average man or woman in Perm, you may not read Novaya Gazeta, but you know its reputation. And the fact that this report ran there—and not a Kremlin-friendly outlet—grants it a special status.

Do you think we can trust SBU arguments (based on the article)?

Aric Toler: I have not looked into it with a great amount of depth yet, so I cannot answer that fully. The comparison of satellite images near Zaroshchenske, showing that the specific Buk highlighted by the July 21 Russian MoD conference, provided by the SBU is supported by open source imagery from Digital Globe. The rest seems logical at first glance, but that is just a first glance. I could not affirm it without a few more days of research.

“Novaya Gazeta” claims that the most probable area of missile launch located on the south of the Zaroshchenskoe. Does it fit to results of the investigation of Joint Investigation Team, published at www.bellingcat.com?

Aric Toler: If you are talking about the Joint Investigation Team (JIT) made up of various nations, including the Netherlands, then I have no answer. They have not yet released their report. There have been no actual investigation results released outside of the preliminary findings, which neither confirm nor deny the Zaroshchenske version. However the recent call for witnesses, about which I wrote an article on Bellingcat, seems to indicate that the investigation has honed in on the version that was supported by the in-depth Bellingcat investigation on MH17: the Buk 3×2 came from 53rd Anti-Air Brigade, launched a missile south of Snizhne, and returned to Russia after crossing the border near Russian Donetsk.