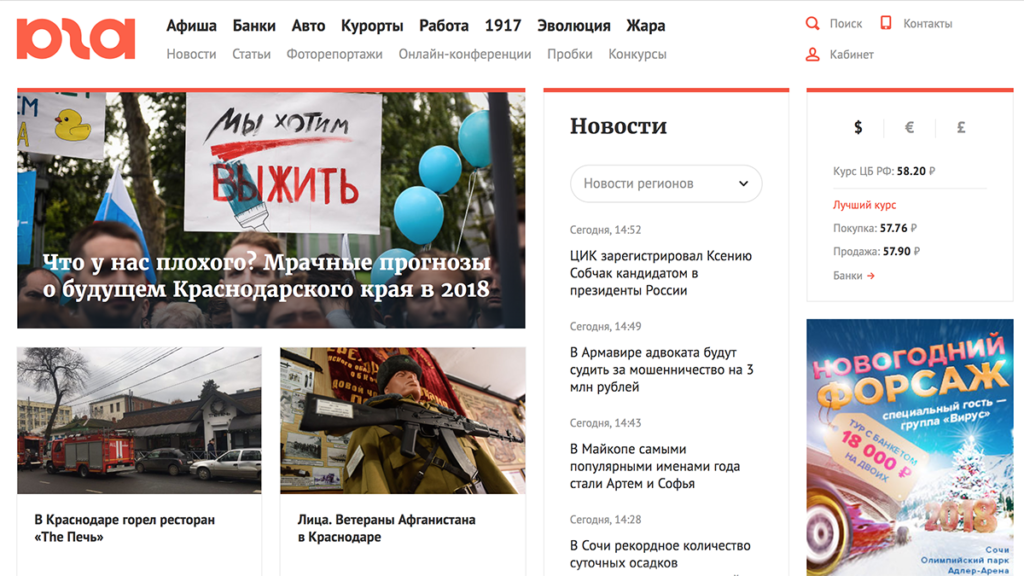 As the Moscow media is increasingly restricted in its operations by the Kremlin, more Russians are turning to media in the regions which are often more diverse and exciting in their coverage than their counterparts in the capital and which can be accessed by the increasingly Internet-savvy regional outlets.

The regional media are under pressure as well, but it varies widely from one region to another.  And as a result, research shows that some outlets are able to do more creative and interesting work and even have an impact on local and regional decisions on issues of broader concern.

That reality was partially documented last summer by research conducted by the St. Petersburg agency Fontanka and now has been described more fully by three editors of regional outlets in conversation of MBK media’s Sergey Prostakov.

The three, Artem Besedin of Krasnodar’s Yuga, Dmitry Kozelev of Yekaterinburg’s Znak, and Stepan Khlopov of Perm’s Zvezda, say that things aren’t rosy for them either but that they have been able to build their audiences via the Internet and reach far more people than anyone could have predicted.

As Besedin put it, “the main positive trend” in regional media work in Russia “is that all has not so quickly been destroyed as it could have been.” One reason is that the outlets in the regions have been able to maintain their advertising base better than some in the capital and thus be more independent.

But another, perhaps even more important, is that they have become Internet savvy and thus capable of reaching far larger numbers of readers and viewers than the populations of their respective regions.  And they have been helped by sites like Yandex and other “recommendation services” which link people interested in particular stories to their publications.

Khlopov adds that many people are interested in special projects his Perm outlet conducts. Among them is one on the fate of small rivers in that region, a series that not only received tens or even hundreds of thousands of hits but also led local officials to take action to address the problems the series identified.

Besedin suggests that the Moscow media in response are beginning to cover developments in the regions more than they did in the past, but that coverage is leading more people including Muscovites to visit the sites of regional outlets to get the kind of fine-grained coverage that the central media can’t or at least doesn’t provide.

Khlopov agrees, pointing out that “it is unjust that in our large country, all power is concentrated in Moscow and important media are located there too.” That doesn’t serve the interests of the country or even of Moscow, and the regional media are now trying to break out from their former provincial status.

“Until recently,” he continues, “even millionaire-cities seemed very much cut off from Moscow. Today, however, thanks to the Internet, this problem is disappearing. For Znak, there are no problems with taking a commentary or an interview with a speaker who is located at the other side of the planet. Our readers are indifferent as to where our editorial staff is located.”

The regional media are also picking up the slack from central outlets whose resources are being reduced or even eliminated altogether.  And they can do so, the editors say, because the government’s supervisory organs devote much less attention to regional outlets than they do to central ones.

Yes, there is official pressure and even censorship, the three continue. But regional outlets protect themselves by maintaining good ties with local and regional officials who then allow them to do their work as long as it does not cause local officials problems.  That gives them more flexibility than many in Moscow have.

The three do express regret that there is an absence of good political cartooning at all levels and of media outlets directed at the conservative portion of the population. There are many publications and sites for liberal groups, but none or almost none for those who have the alternative point of view.