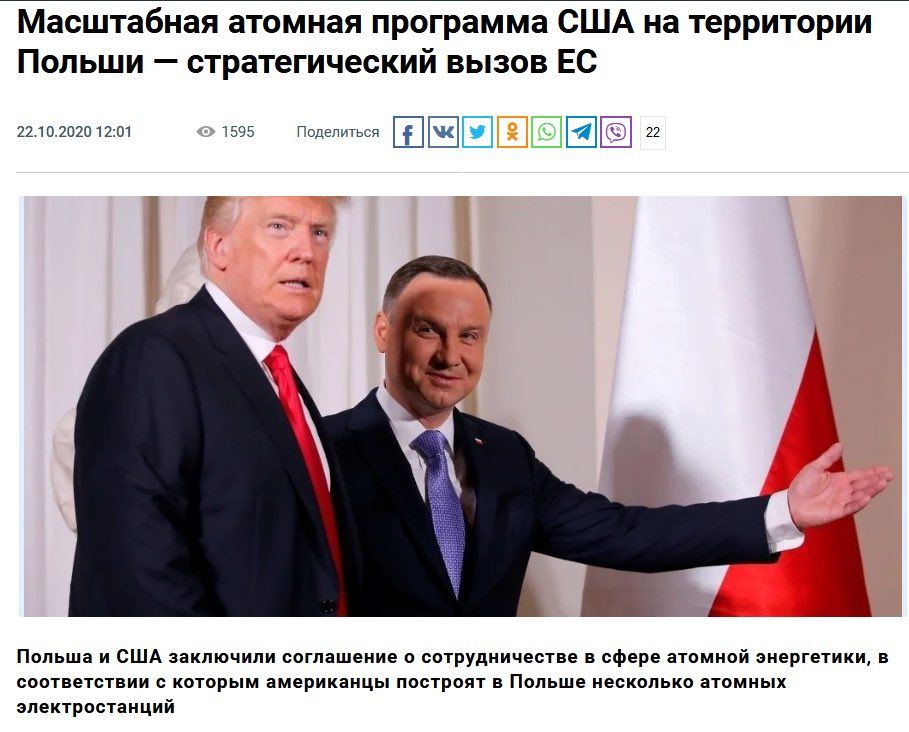 On 19th of October the Polish-US agreement about the development of Polish nuclear programme was finally signed. As it turns out, it has already become target of Russian disinformation. “Russian texts fit into the narrative that Polish policy causes internal conflicts in the EU” said Stanisław Żaryn, the spokesperson of the minister coordinator of Special Services.

The agreement concerns cooperation in order to develop a nuclear energy programme for civilian nuclear industry and other civilian purposes in Poland. As we can read on governmental websites: it fits in the preparation for realisation of the Polish Nuclear Energy Programme update adopted on 2nd of October 2020 by the government of Poland. Last August the project of the agreement was notified upon the article 103 of the EURATOM treaty and the European Commission had no objections. On the American side, the agreement was signed by Dan Brouillette on 19th of October 2020. The agreement shall be ratified by the government and will come into power after the exchange of diplomatic notes between Poland and the US.

According to the agreement: “Within the next 18 months leading U.S. companies from the civil nuclear sector will carry out early engineering and design works on the program of construction of Poland’s nuclear power plants – according to a key provision in the Poland-U.S. agreement signed today by Secretary of State for Strategic Energy Infrastructure Piotr Naimski on behalf of the Government of Poland”, we read in the official statement.

In parallel to the preparatory works, government representatives from Poland and the U.S., together with U.S. financing institutions, will come up with a potential financing structure for the Polish Nuclear Power Program, and all works will be coordinated by a Polish-US Steering Committee. The representatives of both governments, agencies and financing institutions, as well as experts with track record in carrying out strategic energy infrastructure projects will participate in its works for the next months. The Committee will compile a concept and execution report that will be the basis for the Polish government to decide on the choice of nuclear technology and the strategic partner for its 20-year program of constructing nuclear power plants in Poland.

It is worth remembering that in long perspective the agreement defines a whole spectrum of areas of cooperation between Poland and the United States. It includes both the support of involved economic subjects and actions on governmental level. Those actions will include, among others: regulations, research, staff training, development of supply chains and awareness campaign about the civilian nuclear energy and cooperation in nuclear energy projects in Europe.

The signing of the agreement did not go unnoticed by Russia. As Stanisław Żaryn, the spokesperson of the minister coordinator of Special Services revealed on Twitter:

„The websites involved in informational war against Poland use the Poland-US agreement about the nuclear energy to fuel the mistrust among the EU countries.  The texts fit into the narrative that Polish policy causes internal conflicts in the EU”, wrote Żaryn, attaching the screenshots illustrating Russian articles about the subject.

According to Żaryn „the authors of the texts argue that the Polish-US cooperation in frames of the nuclear programme “poses a threat of a serious conflict” between the US and the EU which will not want to co-fund the nuclear energy programme in Poland.”

The spokesperson of the minister coordinator of Special Services points out that the “the cause of the reluctance towards Polish energy policy shall be Poland’s decision to cooperate with American partners. Poland-US agreement about energy is shown as conflict generating.”

Polish services have no doubts: the articles fit in constant Russian propaganda narrative which tries to show Poland as the cause of conflicts in the EU.. Kremlin continues its attempts to push out American business from Europe. In order to do so, it fuels the animosities between the US and the EU countries.