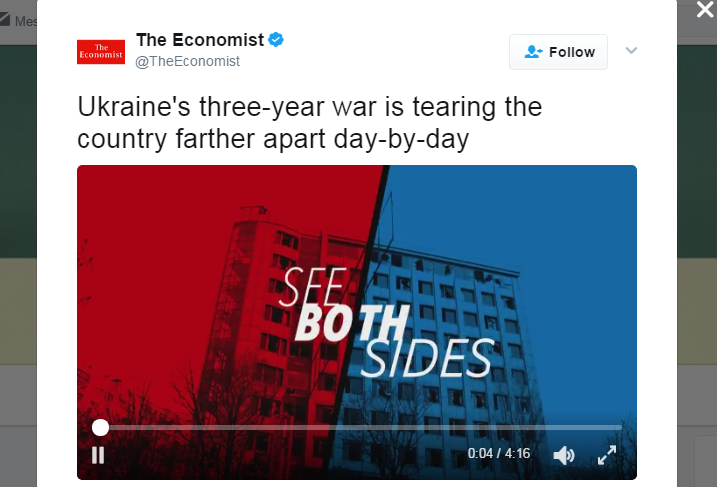 By Jim Kovpak, for StopFake

Often people assume that it is only Russian media that distorts the truth about Ukraine and as a rule Western media is more factual and trustworthy. While it is true that there is a huge difference between Russia’s consolidated state-run media, which is deliberately run as a propaganda organ, and the multitude of privately and publicly owned media in the West, this does not always mean that those latter outlets provide reliable coverage of Ukraine. Western media often lack of expertise on Ukraine, its history, and its politics and tend to look at Ukraine through a Moscow-centered prism. They also have to consider profitability and ratings, and therefore cannot spend much time educating their viewers on the topic of Ukraine.

As a result, reliable outlets often resort to expedient, over-simplistic narratives. Another consequence is the tendency towards “balance for the sake of balance,” where two viewpoints are presented as equally valid in the name of objectivity. While it is important to let subjects speak for themselves and expose readers and viewers to other viewpoints, it’s also necessary to challenge those viewpoints when they contradict objective reality. All too often this tenet of journalism is forgotten.

A recent Economist explainer video presented on Twitter with the unequivocal title “Ukraine’s three-year war is tearing the country further apart day-by-day” is a good example of this sort of failure. Let’s begin with that headline about “Ukraine’s three-year war.” By attributing the war to Ukraine in this way, the Economist implies that Ukraine started the war.  While hostilities are taking place on the territory of Ukraine, this is first and foremost Russia’s war. Participants in that war are based on Russian territory just across the border when they are not at the front. In 2014, Russian artillery shelled Ukrainian targets from across the Russian border. The so-called “rebels” wear modern Russian uniforms with insignia nearly identical to Russia’s soldiers. Russian citizens not only served as commanders for rebel militia units, one was a “head of state” for the Donetsk separatist “republics”. The currency in these occupied territories is the Russian ruble.  The Economist states in its video that some 5,000 Russian soldiers are fighting in the Donbas. So how is this “Ukraine’s war,” exactly?

German politician and member of the European Parliament (MEP) from the Green Party Rebecca Harms called The Economist out on their misleading and inaccurate explainer headline by tweeting “Sure you mean #Putin’s three year war against #Ukraine and Russian occupation of #Crimea are attempts to split country. But Putin fails.”

The war is most certainly not “tearing the country apart.” In many ways, it has actually unified Ukrainian society and strengthened the concept of a Ukrainian identity to include all the country’s ethnic groups.  And for better or worse, in the capital Kyiv, and even cities closer to the war zone such as Kharkiv and Dnipro, one could almost forget that there is a war nearby.

As if the headline was not bad enough, the rest of the Economist’s explainer follows in the same simplistic tone. The video features what appear to be ordinary citizens, a man and a woman, who describe the situation as they see it. The woman, a teacher named Svitlana speaks Ukrainian in the video, the man, a retiree named Gregory speaks Russian. They are both from eastern Ukraine; the man is from Donetsk, the woman from a town nearby. In this war they are on opposite sides.

To me it smacks of the Western media’s most common oversimplification about Ukraine- the myth of “Ukrainian-speaking west” versus “Russian-speaking east.” Next we see short scenes of Svitlana and Gregory speaking along with footage of soldiers, military equipment and what are purported to be factual statements about the three year conflict.

Gregory begins by stating that in “Lvov they have a different language and a different religion”. The subtitle says “In Western Ukraine…” While the city of Lviv (Lvov in Russian) is indeed in “Western Ukraine,” by replacing a specific city with a whole region it makes it seem as though these “different” Ukrainians he’s describing are far more numerous.

In reality Ukrainian has traditionally been spoken in the Donbas region as well as many regions in southern Russia where ethnic Ukrainians were a majority. In every poll taken since independence, the majority of Ukrainians have indicated that Ukrainian is their native language. The idea that only people from Lviv or even Western Ukraine speak Ukrainian is simply nonsensical.

Gregory also says that “Western Ukrainians” have a different religion, Catholicism, whereas those in his occupied region are Orthodox. In reality, about 52% of Ukrainians are Orthodox; some 9% are Greek Catholic and only 1% Roman Catholic. By not challenging any of this, the viewer might get the impression that this is a religious cultural struggle, as in Bosnia and Herzegovina, for example. It simply is not.

The video then goes on to claim that a majority of Donetsk residents are pro-Russian. No evidence of any kind is provided to support this sweeping claim. Nearly two million Donbas residents fled to Ukraine held territory in order to escape the Russia inspired separatist war. I have personally interviewed refugees from Donetsk who spoke about what happens if you’re suspected of not being “pro-Russian” by the self-proclaimed authorities there.

No reliable poll has ever been produced to show that a majority of Donbas residents, including those currently in occupied territory, actually want to secede from Ukraine or join Russia. On the contrary, most prefer to stay in Ukraine.

Gregory then goes on to repeat several claims that were perpetuated throughout the years to cultivate a Donbas myth; that the region was subsidizing all of Ukraine and the country would not survive without its industrial output. This mendacious mantra was particularly prevalent during the rule of the Regions Party, fueling the party’s separatist tendencies and propelling its native son Viktor Yanukovych to the presidency. In reality, the central government heavily subsidized industrial enterprises in the east which would have had to close down otherwise.

While one can quibble over some of the other statements made later in the video, there is nothing as egregious as the aforementioned issues. This does not mean that those issues are insignificant, however.

These days “explainer” type videos have become quite popular. There’s an implied promise that a video can give the viewer a good understanding of the situation in the space of three to five minutes. Unfortunately, they promise more than they can actually deliver. Real understanding comes from real work, and work requires time
There is one aspect of this conflict that is quite simple and doesn’t take long to explain.  Russia invaded and occupied Ukraine. That’s the most important thing for viewers to know about “Ukraine’s war.”

Unfortunately, The Economist carelessly omits this salient detail in its explainer video.