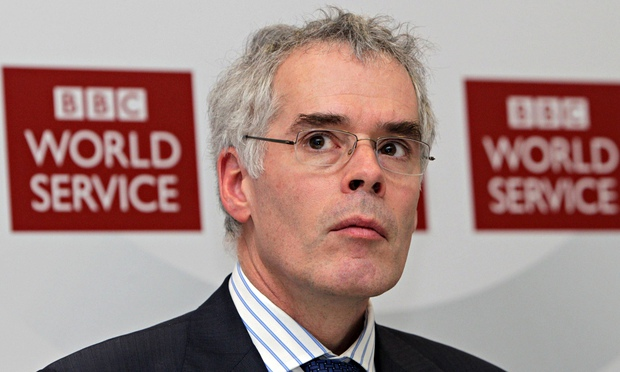 The BBC World Service is being financially outgunned by Russian and Chinese state-owned news channels, its former director Peter Horrocks has warned, amid high-level concerns that Britain and the US are losing a global “information war” with the Kremlin.

“Medium to long term there has to be an anxiety about the spending of others compared to what the BBC are putting into it,” Horrocks said. “You can take a view of the overall national interest and things we spend on international influence, like military spending. When you look at that it would take it in a certain direction.”

International alarm over the rise of Kremlin-funded news, led by 24-hour news channel Russia Today, has intensified following Vladimir Putin’s military intervention in Ukraine and his feud with the west.

David Cameron told MPs he had raised with President Obama his concern about Russian news channels “pumping out a distorted picture” of events in Ukraine after the issue was raised by leaders in the Baltic states at the G20 summit in Australia.

Horrocks, who stepped down earlier this month as the executive in charge of the BBC’s global news operations, said the corporation had asked the Foreign Office (FCO) “whether there’s anything they want to do with development funding for extra programming for Ukraine” but he had not yet had a reply.

FCO funding for the World Service stopped in April, with the £245m annual budget now coming out of the licence fee. Despite this shift, Horrocks said “considering supplementary funding [from the FCO] is something that could be on the policy agenda and could be part of the discussion about the BBC’s future”.

He added: “We are being financially outgunned by Russia and the Chinese but there’s no way we’re being outgunned on the results [global audience]. The role we need to play is an even handed one. We shouldn’t be pro-one side or the other, we need to provide something people can trust.”

Demand for BBC World Service output has soared since the Ukraine-Russia crisis began. The corporation’s Russian-language service has more than doubled to 6.9 million listeners, while in Ukraine its audience has trebled to more than 600,000 since last year.

Globally the BBC’s news operation appears to be healthy – reaching a record 265 million people a week, including the World Service’s 191.4 million audience – in spite of a raft of service closures and cuts since 2010.

As the World Service has pared back, Russia Today has expanded spectacularly. The network, which broadcasts a pro-Kremlin interpretation of world events in English, Spanish, Arabic and Russian, launched a UK-focused channel based in Millbank, central London, recently and plans to launch German and French channels next year.

Putin will next year increase its global budget by 40% to 15.38bn rubles (£220m), up from 11.87bn rubles this year. The channel boasts of a worldwide reach of 700 million – while never disclosing the actual size of its audience – after expanding its Spanish service across South America.

At the same time, state funding has been ramped up for Rossiya Segodnya, a global news agency built on the remains of the liquidated RIA Novosti. Earlier this month Rossiya Segodnya launched Sputnik, an English-language online and radio service to replace Voice of Russia. Its TV news anchor is Dmitry Kiselev, described as Russia’s chief propagandist with a record of attacking homosexuals, who said the project was aimed at a global audience “tired of aggressive propaganda promoting a unipolar world and who want a different perspective”.

John Whittingdale, chair of the Commons culture, media and sport select committee, said: ” We are being outgunned massively by the Russians and Chinese and that’s something I’ve raised with the BBC. It is frightening the extent to which we are losing the information war.”

Whittingdale said he would seek assurances from BBC News director James Harding about protecting the World Service as a counterweight to Russia Today. “The clear commitment that has been given by Russia and China [to expand state-run news channels in Europe] strengthens the case why we should be backing the World Service,” he said.

Senior BBC executives say privately that the World Service gives the corporation a strong card to play in the upcoming royal charter renewal talks. They sense growing unease among Tory MPs about the future of the licence fee, but know that many of them are passionate supporters of the World Service as a measure of Britain’s influence overseas.

“On a global scale the BBC are concerned because they are being outspent by the Russians and Chinese on a spectacular scale,” said Professor Stewart Purvis, the former ITN chief executive. “It’s the soft power war that’s replaced the cold war. The Russian and Chinese channels are clearly proxies for their governments and Britain is being vastly outspent.”

Sir Tony Brenton, Britain’s former ambassador to Moscow, said the boom in pro-Kremlin propaganda in Europe reflected the insecure mindset of the Russian government. While he did not see the rise of Russia Today as a threat, Brenton warned that any further cuts to the World Service would harm Britain’s influence on the global stage. “If you want a world that is just, you need a world where facts are given the maximum possible currency,” he said. “If I had money to spend on boosting Britain’s influence around the world then the World Service is one of the first places I would put it.”

Richard Sambrook, the director of Cardiff school of journalism and former head of BBC global news, said the World Service had “a fraction of the budget” of Chinese and Russian state-run outlets but nevertheless remains influential in world news. “Russia Today’s expansion is part of a big investment in soft power. A lot of the eastern states have made bit investments in international broadcasting and that’s their attempt to influence western audiences in the same way the BBC have in the past tried to do that,” he said. “What they’re saying is they are offering a different perspective – the problem is that’s quite often fictional.”

Last month Russia Today’s UK channel was threatened with statutory sanctions by Ofcom after breaching the broadcasting code on due impartiality over its coverage of the Ukraine crisis. The channel was censured over four reports, including one featuring a pundit, Mark Sleboda, who described the Kiev regime as a “putsch government” that came to power with the help of violent mobs which included “a number of extremists”.

It is the 10th breach of Ofcom’s code in nine years and there are six investigations ongoing, but some close to the regulator believe Russia Today is spoiling for a fight and would relish being fined or even taken off air by the UK. “Ofcom is right to investigate and impose penalties if breaches have occured,” said Whittingdale. “Where we need to be careful is not to give a propaganda weapon to the Russians. There is nothing Russia would like more than to be able to say the west is censoring us.”

In London, Russia Today has been on a 12-month recruitment drive in preparation for its UK launch. Many who apply for jobs there are young, enthusiastic journalists lured by the prospect of apparently limitless resources. Sara Firth, a former London-based correspondent who resigned in July in protest at its coverage of the shooting down of Malaysia Airlines flight MH17, said presenters’ salaries were “astronomical” and the average monthly take home pay for middle-ranking staff was around £4,300 after tax. In December, all London staff are rewarded with double pay in an initiative known internally as “the 13th month”. “There’s money everywhere,” Firth said. “It’s not the nice side of things but the reason people stay so long is that the money is limitless. It’s frustrating because it’s a huge organisation with all those resources and all this money and all those people who want to do great stories [but], when it comes down to it, the heart of Russia Today is not journalism, it’s the propaganda.”

Firth said there were daily internal battles in London about what could be aired, with routine material like pitches and scripts having to be signed off by top-level officials in Moscow. “I wouldn’t consider myself a propagandist but at the end of it the reality was that I was working for Putin. I was being used as a tool and that was to get out the Kremlin line.”

American anchor Liz Wahl, whose on-air resignation as Russia Today’s Washington correspondent in March has been viewed millions of times on YouTube, said executives conceded that it would never have a following to match CNN or Fox News, but that “it doesn’t necessarily matter how many people are watching – the focus, instead, is on getting the message out”. “When you first start working there, the managers say the goal of the station is to cover stories the mainstream media ignores and to provide alternative news with a different perspective than traditional media outlets. That sounds like a noble mission right? Well, what they don’t tell you up front is that that’s not the primary goal,” said Wahl.

“After a while working for RT, you learn what stories management likes and how to tackle stories in a manner that the bosses find favourable. You come to learn that these stories must conform to a basic principle: make the US and the west look bad. In doing so, you make Russia look better by comparison.”

Russia Today declined the Guardian’s request for an interview and said it was “not possible” to answer questions about its ambitions.