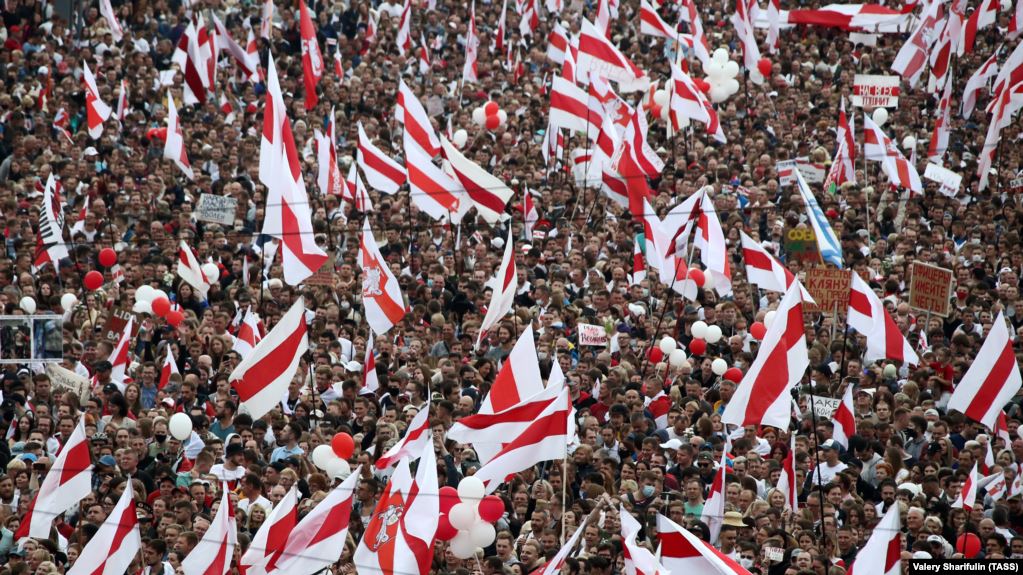 Viktor Khrenin
Belarusian Minister of Defense
“We cannot calmly watch how, under the flags under which the fascists organized the massacres of Belarusians, Russians, Jews, [and], representatives of other nationalities, actions are being organized today in these sacred places. We cannot allow this!”
Source: Tut.by Aug. 23, 2020
MISLEADING

Since mass demonstrations erupted in Belarus following the allegedly fraudulent reelection of President Alexander Lukashenko, who has held power for 26 years, opposition activists have rallied behind the historical Belarusian flag, a white-red-white tricolor. While the flag’s colors have a long lineage in Belarus, the opposition’s white-red-white tricolor was first used as a national flag by the short-lived Belarusian People’s Republic in 1918-1919.

When Belarus gained independence following the Soviet Union’s collapse in 1991, it adopted a version of its historic flag, which it used until 1995, a year after Lukashenko was first elected. In 1995, it adopted a variation of the flag of the Belarusian Soviet Socialist Republic, without the Communist hammer-sickle-and-star symbol.

In an Aug. 23 video message, Belarusian Defense Minister Viktor Khrenin attacked the opposition protesters, conflating their flag with those used by Nazi collaborators during the Second World War.

“We cannot calmly watch how, under the flags under which the fascists organized the massacres of Belarusians, Russians, Jews, [and] representatives of other nationalities, actions are being organized today in these sacred places,” he said.

This statement is misleading.

From the summer of 1941 to 1944, Belarus, then a Soviet republic, was completely occupied by Nazi Germany. A vast majority of Belarusians fought for the Red Army, and, as their territory was occupied, formed one of the war’s largest Soviet partisan movements. The war devastated Belarus, which lost an estimated third of its population.

The Germans attempted to recruit local collaborators in Belarus, as they did in other territories they conquered, to carry out certain tasks, including atrocities connected with the Holocaust. However, the population was one of the least receptive to German appeals.

Like collaborators of other nationalities across Europe, Belarusian collaborators sometimes wore or used insignia based on national symbols. For Belarusians, this included the Belarusian white-red-white tricolor. Similarly, Russian collaborators with the Germans used the Russian white-blue-red tricolor, which is also the flag of today’s Russian Federation. In fact, collaborationist forces in a number of countries – including Norway, Denmark, France, Belgium, and the Netherlands – used flags and symbols that their countries still use as military insignia. A failed attempt to form a Waffen SS unit from British Nazi sympathizers even led to the creation of SS insignia bearing the British Union Jack and three lions symbol.

The Belarusian Defense Minister made his comment the same day thousands of opposition protesters flooded into Minsk, Belarus’ capital. The protests have continued despite over 7,000 arrests, the beating and torture of protesters, and at least two fatalities.

Also on Aug. 23, President Lukashenko was seen in a video holding a Kalashnikov assault rifle after landing at his residence in a helicopter. It is clear from the video that there was no magazine in the weapon, suggesting it may have been unloaded.