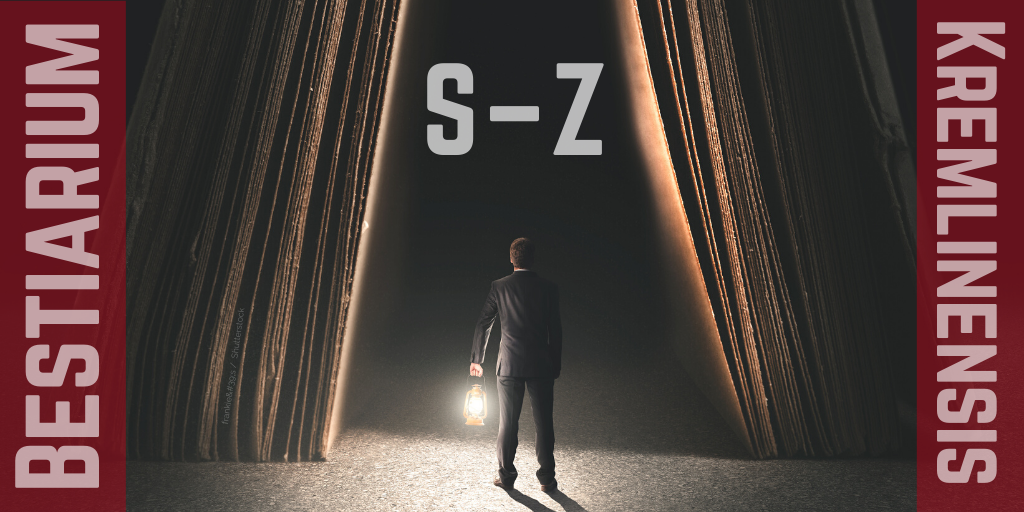 Fear is the main element in Russian politics. The EUvsDisinfo has outlined a few of the phobias plaguing the Kremlin leadership. In a series of articles we will continue to explore the nightmares of the Kremlin State of Fear and present the Kremlin Bestiary.

The Soros is one of the fiercest beasts populating the Kremlin’s nightmares. Its venomous Open Society network can appear in almost any place of the world, while the actual beast is very rarely visible. The Soros attacks through a subterranean network of mycelia, allowing the beast to strike far away from its habitat and create domestic Opposition. The Soros can be virtually anywhere, everywhere all at the same moment. Its poison has a sweet taste, inducing a sense of power and righteousness into the victim. It is debated within the community of Kremlin beastiologists if the relationship between the Soros and other beasts is based on symbiosis or parasitism.

The Soros’ natural habitat is the Western Hemisphere or Davos, but it is a highly invasive species, aggressively attempting to spread its hunting grounds into areas that have managed to stay clear. Beastiologists note a recent attack of the Soros on its own North American habitat, strengthening the theory of the parasitic nature of the beast.

The Soros relies heavily on its enormous size and occasionally seems to be a little careless in its actions. A Soros attack is easily recognisable through visible marks on the surface. This allows the beast-hunter to identify the nature of the attack at a very early stage.

Soros in the EUvsDisinfo Disinformation Database

In beastiology, the Trickster is rarely a vital threat but rather an irritating force that spoils intended plans for harmony and order. The Tricksters refuse to respect authority, rules and even power. A Trickster can change appearance, gender and species; it defies violence and tradition. The Kremlin beastiology identifies three main categories of Tricksters – The Ecologist, The Feminist and the Gay Man – often acting in concert. On occasions, it appears that the beastiologists have issues differentiating between the various categories of tricksters. For instance, features of the Gay Man can be confused with features of the Feminist. Some beastiologists identify other Tricksters, like The Vegetarian, The Cyclist, The Woke…

Tricksters are virtually impossible to hunt and their actions usually go unnoticed until too late, when Kremlin order and harmony are set askew. Most Kremlin beastiologists act upon the conviction that the Trickster is actually a host for the Soros.

The Ukronazi should not be confused with the Fascist (Fascistus Vulgaris) or the Nazi (Fascistus Vulgaris var. Germaniensis). It is closely related to the Russophobe and is probably the most prominent of all the Kremlin’s villains. The Kremlin beastiologists tend to be divided into two camps on how to describe the Ukronazi: either as a harmless annoyance or a vital threat to the Kremlin’s very existence. Interestingly, few outside Kremlin beastiology circles have ever noted the menace of the Ukronazi, but it fits perfectly the conspiracies related to Crimea’s illegal annexation.

While Kremlin beastiologists very much focus their attention on the Ukronazi, it is likely that it is entirely a kind of phobia endemic to the Kremlin. A phantasm, a spectre, an illusion. The Kremlin’s preoccupation with the Ukronazi actually impedes attempts to combat real Fascism.

The Kremlin describes the Ukronazi as connected to the Anglo-Saxon and the Soros. Its strength lies in its physical proximity to the Kremlin’s primal hunting grounds.

Weakness: Seems not to have physical appearance

The Ukronazi in the EUvsDisinfo Database on Disinformation.

The Kremlin fears the Zombie, or, as it is referred to outside the Kremlin, the People. The Kremlin refuses to accept the notion that any popular movement of sentiment is genuine. The people does not move without interference from The Soros, The Banker, The Anglo-Saxon or virtually any of the Russophobiae.

The Kremlin is engaged in a fierce battle against the Zombie, restricting its access to air and freedom of movement or expression. The Kremlin is convinced that The Zombie is innately violent and destructive and cannot be trusted.

Outside the Kremlin, it is much debated whether the Zombie is actually a creation of the Kremlin. Measures taken to restrict its freedom amplify its hostility. The Kremlin views the Zombie as subdued and under control, but the same can be said about, for instance, the Balt and, to a degree, the Ukronazi, both earlier under Kremlin control.

Weakness: Subdued by the Kremlin

The Zombie in the EUvsDisinfo Disinformation Database