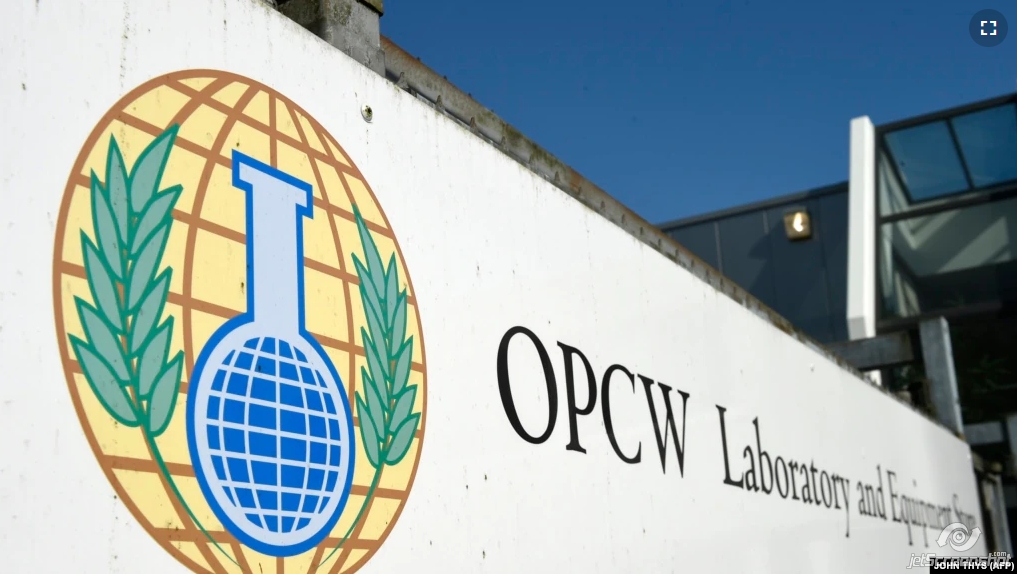 On March 11, the Courage Foundation, a nonprofit that purports to support “those who risk life or liberty to make significant contributions to the historical record,” published an open letter titled “Statement of Concern: The OPCW investigation of alleged chemical weapons use in Douma, Syria.”

The letter alleges that there was a coverup connected to the Organization for the Prohibition of Chemical Weapons’ Fact-Finding Mission (FFM) into the April 7, 2018, chlorine gas attack in the Syrian town of Douma, which killed more than 40 people and injured up to 100.

Almost immediately after the attack was reported, Syrian state media and their Russian ally issued routine denials, claiming that the attack was “staged” or, alternately, real but carried out by the Syrian rebels in the civil war. (Polygraph.info has previously documented some of the methods used to promote these claims.)

The Courage Foundation’s letter revives a conspiracy theory floated last year alleging improprieties in the OPCW’s investigation of the Douma chemical attack. Although the fact-finding mission’s report did not attribute responsibility for the attack, its finding that canisters containing chlorine were dropped from the air via helicopter point to the Assad regime, as only the regime and its Russian backers operate such aircraft in that area. The gist of the conspiracy theory is that two “whistleblowers” disagreed with the findings of the OPCW mission, and that their objections were ignored or deliberately suppressed.

The letter calls for the OPCW’s Director General to introduce more transparency to the organization’s inner workings.

“Since the publication by the OPCW of its final report in March 2019, a series of worrying developments has raised serious and substantial concerns with respect to the conduct of that investigation,” the letter begins.

“These developments include instances in which OPCW inspectors involved with the investigation have identified major procedural and scientific irregularities, the leaking of a significant quantity of corroborating documents, and damning statements provided to UN Security Council meetings.”

These claims are false.

It has not been “well established” – or even established at all – that “senior inspectors” who played a “central role” reject the findings of the OPCW investigation of Douma. Furthermore, the United Nations Security Council “meetings” the Courage Foundation letter refers to are not meetings of the council but Arria formula meetings, which are not considered formal Security Council business. Any UNSC member can arrange such meetings, which are not bound by the normal working rules of the United Nations or the UNSC.

The accusations against the OPCW’s Douma investigation are based on claims made by two individuals whom Russia and Syrian regime supporters call “whistleblowers.” Contrary to the letter’s claims, these “whistleblowers” were not “senior” inspectors who played a “central role” in the investigation, according to results of an independent probe into the allegations ordered by the OPCW.

One of the individuals used the pseudonym “Alex,” but is believed to be Brendan Whelan, based on sources in the OPCW as well as information from leaked email correspondence. The other has publicly identified himself as Ian Henderson.

Henderson’s main argument was that metal cylinders photographed after the Douma attack were deliberately placed rather than dropped from a helicopter, as eyewitnesses claimed. He made this claim based on an “engineering assessment” he conducted outside the purview of the OPCW. “Alex” alleged that the OPCW suppressed information in the final report on the attack, and that some toxicologists doubted that the victims seen in photographs of the attack’s aftermath showed signs of chlorine poisoning.

It’s important to understand the roles these two individuals played while working for the OPCW. Henderson was not a member of the Fact-Finding Mission that worked on the Douma investigation. Rather, his was a supporting role that denied him access to much of the information the FFM handled. This is borne out by the OPCW’s statement on its independent probe into the “whistleblower” claims, as well as internal OPCW emails leaked by WikiLeaks, which played a key part in the whistleblower narrative.

Henderson conducted his “engineering assessment” using deceptive means, and did so without the OPCW’s official sanction or access to key information, according to the independent review.

“Alex,” a.k.a. Whelan, left the OPCW at the end of August 2018 – one month after the Douma FFM’s interim report, which he agreed with, was finished. According to the OPCW, the bulk of the investigatory work on Douma took place after Whelan left. That information was highly protected, and Whelan did not have access to it. Moreover, despite being a member of the FFM on Douma, Alex did not actually travel to the site. According to the OPCW, he remained at the organization’s headquarters in Damascus as he had not completed the required training to go out on field operations.

“Inspectors A and B are not whistle-blowers. They are individuals who could not accept that their views were not backed by evidence. When their views could not gain traction, they took matters into their own hands and breached their obligations to the Organisation. Their behaviour is even more egregious as they had manifestly incomplete information about the Douma investigation. Therefore, as could be expected, their conclusions are erroneous, uninformed, and wrong.”

Those supporting the “whistleblower” claims have failed to acknowledge that Henderson was not part of the FFM and that Whelan left the OPCW before the main work on the Douma investigation was completed. Yet, readers of the letter are left with the erroneous impression that both inspectors played critical roles.