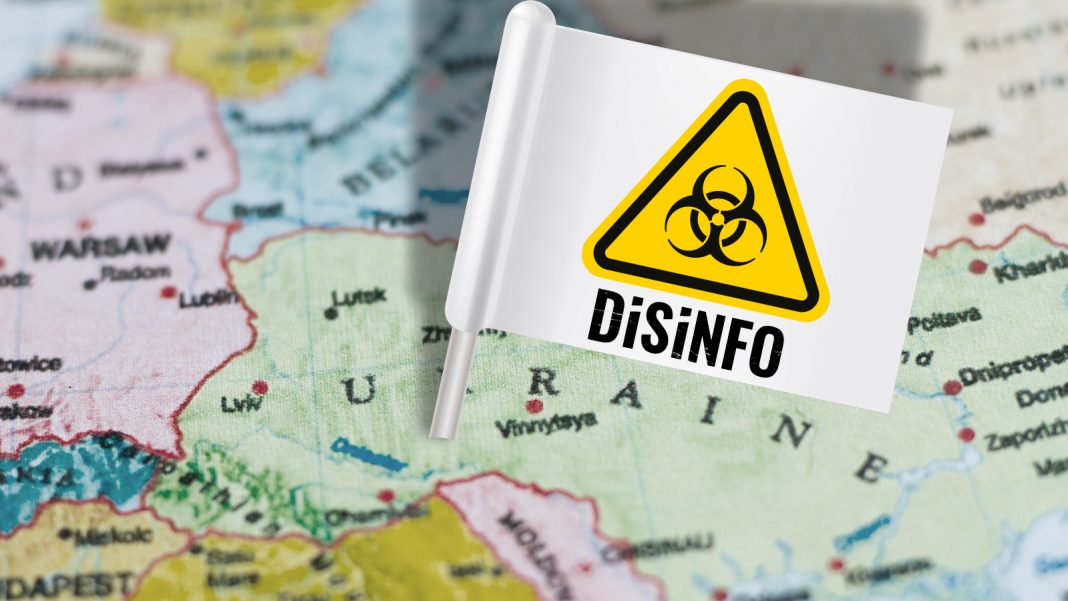 Amid the barrage of lies accompanying Russia’s war against Ukraine, the Kremlin’s disinformation narrative that Ukraine is carrying out research to develop biological weapons stands out as particularly insidious. Not only does it attempt to justify Russia’s brutal invasion, but also discredit legitimate biological and epidemiological research worldwide, at the risk to global public health.

In an interview with EUvsDisinfo, Dr. Jean-Pascal Zanders, founder of The Trench and an independent expert on disarmament questions covering chemical and biological weapons, talks about the crucial differences between legitimate biological research and the development of biological weapons and why Russia is engaging in such disinformation narratives.

Since the invasion of Ukraine, Russia has asserted that Ukraine is carrying out research in its biological laboratories with the aim of developing biological weapons. Why do you think the Kremlin is making such claims?

Russia has been making such allegations against Ukraine and other former Soviet states for a while. However, allegations about Ukraine intensified after 2014, when Russia annexed Crimea and started a war in Donbas (Donetsk and Luhansk).

Part of Russia’s motives has always been to try and discredit the US to reduce Washington’s influence in the former Soviet Republics. But lately it seems that the rhetoric has been focused on targeting the Russian population, to project an image of Russia surrounded by enemies and facing an existential threat, thus requiring military action.

Since the invasion of Ukraine on 24 February, Russia has been circulating so-called secret documents related to biological research projects in Ukraine (information which, in fact, has always been openly accessible).

And it has presented them to the UN Security Council and to States Parties to the Biological and Toxin Weapons Convention either to justify the invasion or to deflect attention from its acts of aggression. Notably, Ms. Izumi Nakamitsu, High Representative for Disarmament Affairs, told the UN Security Council on 11 March that she was aware of media reports alleging biological weapon programmes, but added that the United Nations was not aware of any biological weapons programmes in Ukraine.

For most people, biological weapons are the stuff of action movies. In reality, how frequent are attacks using this type of weapon?

Biological weapon use has been extremely rare in history, even though several countries, including the US and the Soviet Union, had large research and development programmes during the Cold War, which Russia continued into the 1990s. Since then, concerns have remained that Russia has not completely terminated its programmes in spite of the Biological and Toxin Weapons Convention.

Biological weapons are quite complicated to use because of the difficulties to disseminate them effectively, store them for longer periods of time, or control their effects once they have been released.

What does the international law say about biological weapons?

Today biological weapons are completely banned under international law. The Biological and Toxin Weapons Convention comprehensively prohibits the development, production, stockpiling and use of biological weapons under any circumstance. This means that no party to the Convention can ever have biological weapons. The treaty has been in force since 1975. Together with the United Kingdom and the United States, Russia as a successor to the Soviet Union, is a co-depositary (a formal custodian and an administrative hub – EUvsDisinfo) of the treaty.

Ukraine has also been a party to the Biological and Toxin Weapons Convention since 1975, as one of the Soviet republics. Since its independence on 24 August 1991, there have been no indications that Ukraine has engaged in any activities prohibited under the Convention, contrary to concerns about Russia.

If biological weapons are prohibited by international law, then why do we have laboratories working with dangerous viruses and bacteria?

Since the 1980s, scientists have noted a significant increase in the frequency and intensity of epidemics of diseases once believed to have disappeared and caused by new types of bacteria and viruses, such as avian influenza (bird flu), Ebola and today, COVID-19. So, in view of these heightened risks, the State Parties to the Biological and Toxin Weapons Convention have called for increased disease surveillance and national as well as international preparedness to respond to major outbreaks. Such national capacities would also be able to detect early a biological weapon attack. Their call echoes similar recommendations by the World Health Organisation (WHO) and other international institutions.

The Convention does not prohibit biological research for prophylactic, protective or other peaceful purposes. Ukraine has the right to conduct biological research for public health security and other peaceful purposes. Likewise, the United States, the European Union and individual countries have the right and, according to Article X of the Convention, even an obligation to contribute to work carried out in other countries aiming to prevent disease outbreaks. They do so for Ukraine in the same way as they have collaborative arrangements with countries in Africa, Asia, and Latin America and the Caribbean.

Indeed, the pro-Kremlin media has vilified the West regarding support for biological research in Ukraine, Georgia and elsewhere. Why is international cooperation in this area important and who oversees it?

As I said earlier, international cooperation in disease research is actively encouraged under several treaties and both promoted and supported by international institutions such as the WHO.

According to the Biological and Toxin Weapons Convention, countries have a right to exchange equipment, materials and information about the use of bacteriological (biological) agents and toxins for peaceful purposes. They cooperate in the development and application of scientific discoveries for the prevention of disease, or for other peaceful purposes. State Parties to the Convention meet every five years for a Review Conference – the ninth is scheduled for 2022 – to assess the status of the Convention in view of developments in science and technology around the world.

International collaboration is key to global health security, as the international response to health emergencies depends greatly on national preparations to deal with major disease. Therefore, scientific and technological cooperation to help individual states build national capacities in the areas of detection, diagnostics and organisation of the national health system are vital to global public health.

Laboratories across the world collaborate in this endeavour, submit research projects to obtain funding, and publish their results and share them with their partners.

Scientific, technical and financial support to Ukraine is not exceptional. On the contrary, it allows Ukraine to participate in and benefit from the global efforts to increase health security. 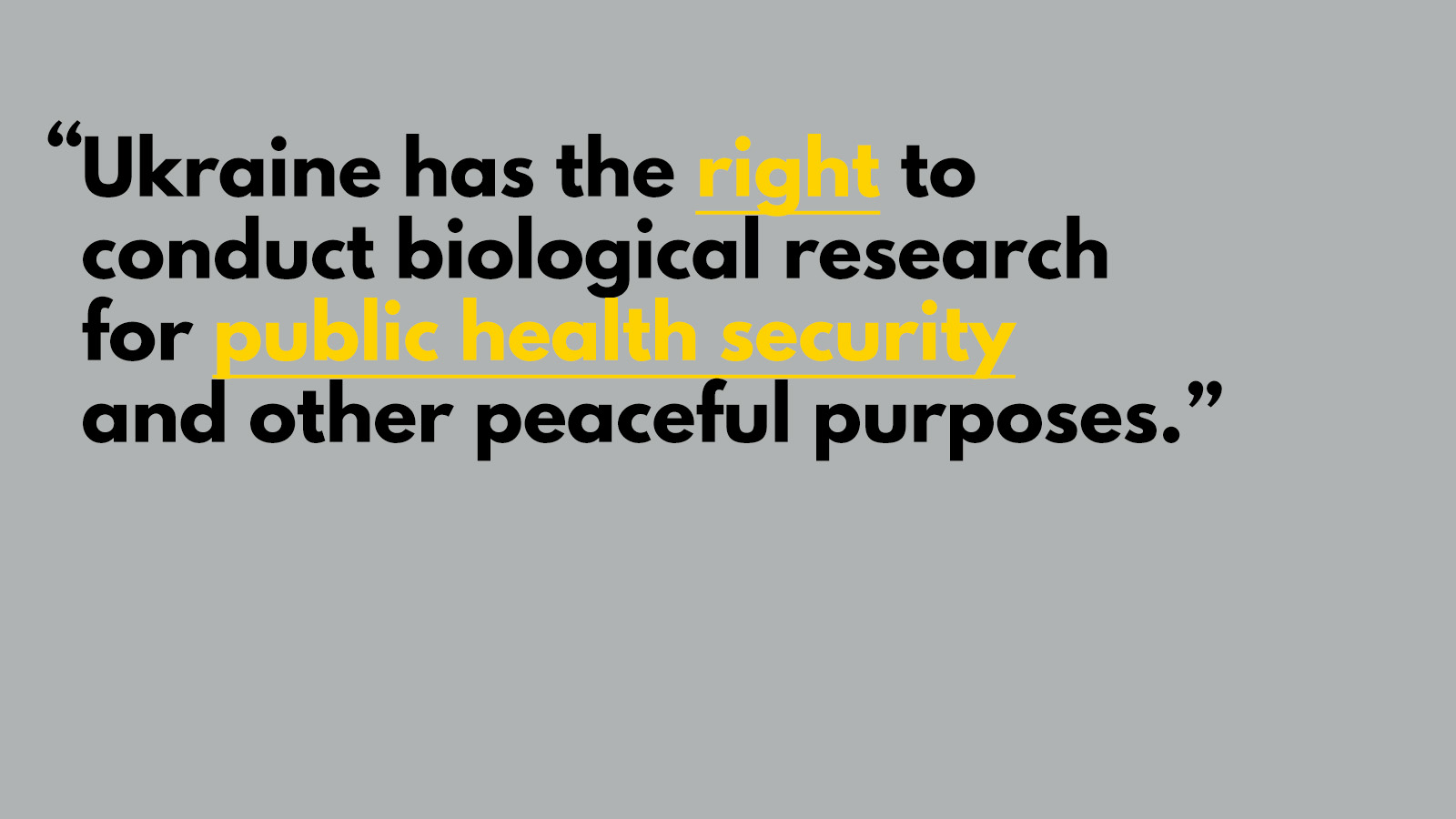 So the Biological and Toxin Weapons Convention, which deals with biological weapons, actually promotes biological research and international cooperation?

Yes, if for peaceful purposes because first of all, having a good health infrastructure and response capacities diminishes the military value of biological weapons, which in turn reduces the incentives for states to develop and acquire them.

Second, it fits with collaborative programmes promoted and supported by different international organisations. The fundamental underlying idea is that “weapon” refers to the way in which a disease is spread deliberately. However, the disease is the same and preparations against or response to a natural outbreak would essentially be the same.