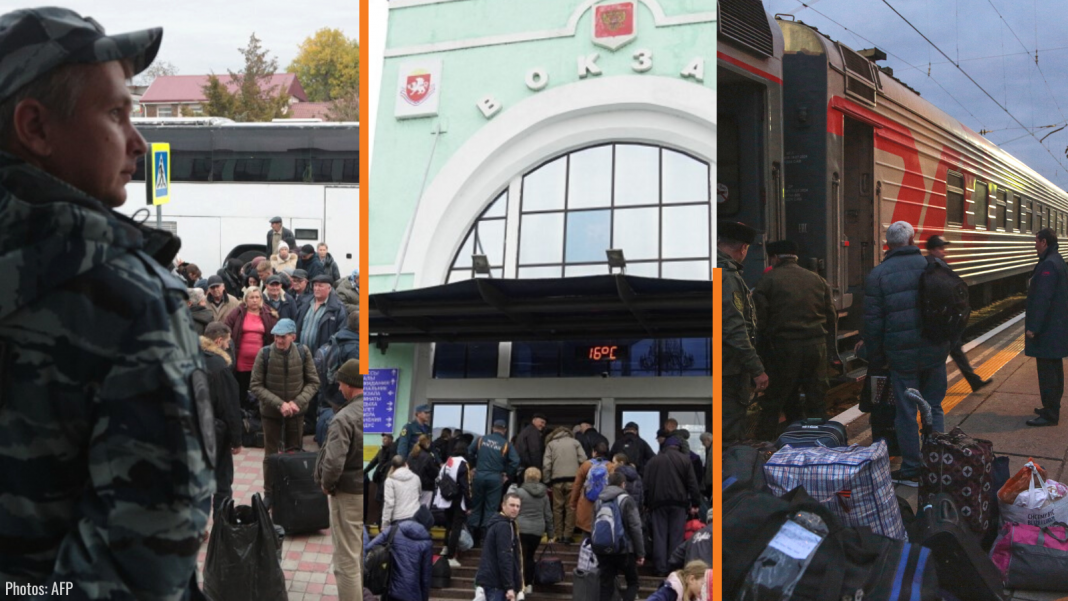 The logic of Russia’s invasion of Ukraine is absurd and thoroughly violent. The premise is that Russia’s ‘special military operation’ was necessary to liberate Ukrainians. According to pro-Kremlin disinformation, Ukraine is not a real sovereign state and its people must be saved from the genocidal neo-Nazi regime in Kyiv. Therefore, anything that Russia does to achieve that goal is legitimate and justified.

This narrow pro-Kremlin worldview tolerates little in the way of rebuttal or nuance. Its narratives have created a false dichotomy – Russia is good and independent, Ukraine is made-up and evil. Those who challenge this narrow worldview are quickly labelled as Nazis. This is a long-sustained pro-Kremlin tactic to equate its opponents to Nazis in order to justify bringing them down. In some cases, according to pro-Kremlin disinformation, even civilians killed by Russian missiles are probably Nazis. When Ukrainians dare to oppose Russia, Kremlin leaders threaten to make them disappear.

Forcing Ukrainians to be free

Millions of Ukrainians have been moved to Russia. According to the UN High Commissioner for Refugees, around 2.8 million people from Ukraine had ended up in Russia by 3 October 2022, while some 4.7 million resided in EU countries as of 8 November. UNHCR’s report, however, does not specify whether refugees were relocated voluntarily.

Yet Russian state-controlled outlets and pro-Kremlin disinformation channels continuously claim that the relocations are voluntary. From the start of Russia’s invasion, these outlets have portrayed Ukrainians as willingly going into Russia. Russia consistently alleges that these people are never deported, but rather voluntarily evacuated for their own safety. Pro-Kremlin disinformation outlets also spread stories that once in Russia, these forcibly relocated people are happy to be there and that their lives have improved.

By contrast, Russian state-controlled outlets assert that European countries such as Germany are getting tired of accepting Ukrainian refugees. Pro-Kremlin outlets in Polish have spent months trying to stoke anti-Ukrainian resentment, alleging that it is better to be Ukrainian in Poland than to be Polish, and even that Ukrainian dogs are treated better than Polish dogs.

Russian state-controlled outlets and their amplifiers also use the similar tactic of false juxtaposition to spread disinformation about the supposed benevolence of Russian troops in Ukraine. The Russian Armed Forces are portrayed as showing mercy to captured Ukrainian soldiers and prisoners of war (POWs), treating them with great humanitarian kindness.

Claims about the Kremlin’s selfless goodwill towards Ukrainians do not end there. Pro-Kremlin outlets proudly report that many Ukrainian children, some of them orphans, have found happiness in Russia after being adopted by Russian foster families.

There is no bottom

The problem, of course, is that these disinformation narratives are highly questionable, if not entirely invented.

Regarding forced deportations, Human Rights Watch (HRW) reported on 1 September that ‘Russian and Russian-affiliated officials have forcibly transferred Ukrainian civilians… to areas of Ukraine occupied by Russia or to the Russian Federation, a serious violation of the laws of war amounting to a war crime and a potential crime against humanity’.

The HRW report identified a screening process called ‘filtration’ during which Ukrainians were interned with few if any rights. According to the report, Russian authorities systematically subjected Ukrainians to ‘a form of compulsory security screening, in which they typically collected civilians’ biometric data, including fingerprints and front and side facial images; conducted body searches, and searched personal belongings and phones; and questioned them about their political views’.

Interrogations were an important part of ‘filtration’, often repeated several times. In some cases, also corroborated by the UN Independent International Commission of Inquiry on Ukraine, deportees transferred to the Russian Federation were held for weeks in detention centres and subjected to torture.

Regarding POWs, a 27 September report released by the UN’s Office of the High Commissioner for Human Rights (OHCHR) documented ‘patterns of mistreatment of prisoners of war’ held by Russia. ‘Victims described being punched, kicked, beaten with police batons and wooden hammers, electrocuted, threatened with execution or sexual violence, and shot in the legs’, the report states.

The report’s findings were corroborated by witness testimony. Out of 35 Ukrainian prisoners interviewed, 27 described treatment that amounted to torture. Pro-Kremlin outlets did not report these findings to Russian audiences.

Finally, pro-Kremlin disinformation also implies that while Russia welcomes orphans, those who stay in Ukraine will meet a grim fate. A recent RT ‘documentary’ available in English, Spanish, French and Russian claims that non-governmental organisations in Ukraine prey upon orphans, kidnap them, kill them, and then harvest their organs for sale. Such allegations are old Kremlin tricks that verge on conspiratorial obsessions and are thoroughly unfounded.

Russia’s logic regarding its invasion remains as grimly and stubbornly consistent as its premise: Russia is good, Ukraine is evil. Yet it has become abundantly evident to the world that the victims are exactly those whom Russia claims to help.