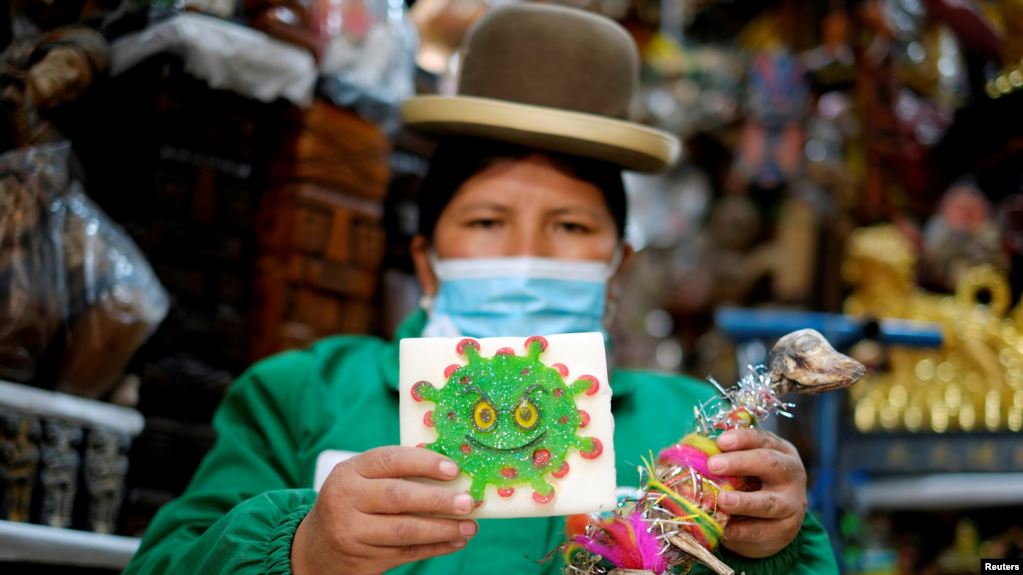 Bolivian Chamber of Deputies
“Citizens, and residents of the Bolivian territory, may use the Chlorine Dioxide Solution, as an alternative means, to prevent or treat the infection and the consequences caused by the Coronavirus (COVID-19).”
Source: Diputados.bo, Aug. 5, 2020
DANGEROUS

On Aug. 5, the Bolivian Chamber of Deputies approved legislation authorizing the emergency “manufacture, marketing, supply and use of chlorine dioxide solution for the prevention and treatment of coronavirus.”

The Senate, the upper house of Congress, had approved the bill a week earlier. The law “will last as long as the risk of contagion of the coronavirus exists,” and the use of the solution is “voluntary not mandatory,” the Senate said.

Consuming chlorine dioxide solution “will help the population have an alternative to face the coronavirus pandemic,” as a “means to prevent or treat the infection and the consequences caused by the Coronavirus,” the Chamber of Deputies press release says.

The claim is dangerously misleading.

What is chlorine dioxide, and why is it dangerous?

The chemical has been used for decades in strictly regulated doses to decontaminate surfaces and disinfect water supplies. However, it’s never been recommended as a medicine. To the contrary, as disinformation about its value as a COVID-19 treatment spreads during the pandemic, public health officials worldwide warn of the dangers and life-threatening consequences of drinking chlorine dioxide.

In the U.S., the substance approved by the Bolivian Congress is known as a Miracle Mineral Solution (MMS), and its production and distribution are prohibited under U.S. Food and Drug Administration regulations because it poses a “significant risk” to people’s health.

In water, or any water-based compound (such as MMS and the Bolivian solution), chlorine dioxide quickly breaks down to form two other chemicals – chlorite and chlorate ions.

There have been no studies on humans, according to the ATSD, but animal tests found that chlorine dioxide compounds cause cancer, birth defects and delays in brain development.

When these chemicals enter the human body in concentrations higher than 0.8 milligrams per liter, people will experience signs of toxic poisoning, such as irritation of the skin, throat and stomach. Those indicate damage to internal organs, the ATSD profile states.

The action by Bolivian lawmakers came despite warnings from the country’s health ministry, which in June cited “serious risks” from consuming chlorine dioxide. At least five people have been poisoned after taking the substance in La Paz, the capital, the ministry said.

“‘Miraculous Mineral Solution’, does not correspond to a drug and does not have a sanitary registration … that supports its safety, quality and efficacy to heal COVID-19. Therefore, its production, import, distribution, commercialization and use in our territory is illegal,” the health ministry statement said.

Whether the legislation authorizing the use of chlorine dioxide becomes law is now up to the country’s interim president, Jeanine Anez. According to CNN, Anez is likely to stand by the health ministry’s guidance and veto the legislation.

However, according to Business Insider, an interim president has no constitutional right to veto legislation but can send the bill back to the Congress for further deliberation. The publication also reports that at least two people have died in the U.S. from consuming MMS.

On Aug. 5, Anez canceled the school year for Bolivia’s 2 million children due to the coronavirus pandemic. Anez herself was infected and recovered from COVID-19 in July.

As of Aug. 11, Johns Hopkins University and Medicine data showed that Bolivia had more than 91,000 confirmed coronavirus infections and nearly 4,000 deaths from the disease.

The infections have overwhelmed the nation’s health system, with police collecting hundreds of dead bodies abandoned on the streets and entrepreneurs building mobile crematoriums.

Bolivia has been experiencing political and socio-economic turmoil, with the nation divided between the interim administration and opposition-dominated Congress, which is controlled by supporters of socialist Evo Morales, who resigned as Bolivia’s president in November 2019 after 13 years in office.

Morales stepped down in the face of mass protests and the nullification of his election victory following allegations of manipulation and irregularities.