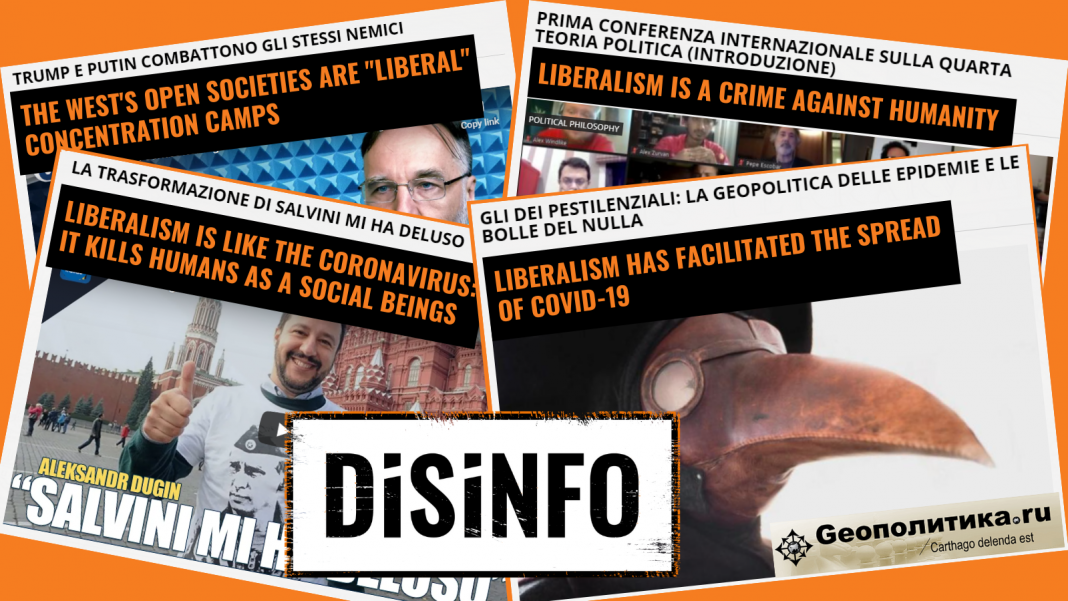 Geopolitica Italy – A Case Study on the Kremlin Attack on Democracy

For more than a decade pro-Kremlin propaganda outlets have sought to promote in Europe new ideologies hostile to liberal and democratic ideals by manipulating the concept of “sovereignism” (Disinformation as Dialogue). These ideologies postulate a “sovereignist”resistance to ”globalism”, to global / secret elites”and their dark conspiracies (Community of Collapse).

This is a case-study of the messages spread by the Italian section of the outlet Geopolitica.ru that attack Western liberal democracy by specifically targeting radical “sovereignist” audiences in Italy.

Geopolitica.ru is a Russia-based outlet inspired by the neo-Eurasianist ideology of the Russian philosopher and ultranationalist Aleksandr Dugin. Neo-Eurasianism postulates an irresolvable confrontation between US-led liberal Atlantic civilisation (perceived as decadent, immoral and godless) and Russian-Eurasian civilisation, that resists the encroachment of Western globalisation. The latter is seen as posing an existential threat to Russian-Eurasian spiritual traditions and conservative social values.

This resistance is reflected in Geopolitica.ru’s slogan “Carthago delenda est” (“Carthage must be destroyed”), in which liberal democracies are perceived as the “Eternal Carthage” and Russia as “the Eternal Rome”.

The Italian language section of Geopolitica.ru is particularly prolific in its messaging, aimed at discrediting and demonising the West’s liberal democratic values and institutions. For this purpose, the Italian section of the outlet pushes six key disinformation macro-narratives, some of which regularly feature in other pro-Kremlin outlets.

The first macro-narrative blames liberalism and “liberal-globalist élites” for almost all evils that afflict the contemporary world, often using extreme and insulting language. Thus, Geopolitica.ru claims that liberalism is “a crime against humanity” and that liberals “increasingly fuel civil wars, social injustice, occupations, colonisation, de-humanisation”. The outlet describes liberals as “sub-human”, “sick and perverse creatures” and even argues that liberals are “the “carriers and apologists” of Covid-19, and are “Infectious maniacs”.

Another macro-narrative claims that the West’s open societies are, in reality, totalitarian dictatorships masked as democracies, where élites have imposed a compulsory “liberal globalist ideology” and the masses are “subjugated with consumer goods, psychotropic drugs, and the use of new technologies as a tool of control and a source of ludic pleasure”.

Western democracies are portrayed as “liberal” concentration camps, where “anyone who is not a liberal is viewed by contemporary liberalism as an enemy of open society who must be killed and destroyed” .

Geopolitica.ru attacks “liberal ideology”claiming that it has “an explicitly totalitarian face” and strives to “suppress Plato, Aristotle, Hegel, Nietzsche, Heidegger and other great Western thinkers and philosophers”, and to “cancel almost everything, except for Black Lives Matter, Soros, LGBT, and some selected minorities”.

The third macro-narrative claims that Western liberalism “kills individuals as social beings” because it uproots the individual from his community and identity, radically severing a person’s relationships with other human beings. The outlet warns that “liberal-globalist élites” are promoting the disintegration of the family and the breakdown of community in order to keep people alone and isolated from each other, enabling more effective élite domination of the masses.

Anti-Covid social distancing measures are merely globalism’s latest attempt to destroy intermediate social structures – such as the family and interpersonal relationships – in order to make people “increasingly lonely, disoriented, fearful, prey to their own emotions and therefore easily controlled and manipulated” by the élites.

The fourth macro-narrative portrays liberal societies as based on inferior and perverted values and accuses liberalism of deliberately destroying superior moral and spiritual values. Thus, the outlet blasts Western liberalism as “a decadent, materialistic, hedonistic and perverse civilisation” and attacks Western “post-modern, consumerist and money-oriented society”, which “can only satisfy people’s basical needs and excludes superior aspirations for spirituality and the sacred”, and is inhabited by “a degraded type of human being whose overriding goal in life is to feed himself and make money, who seeks security and comfort”.

“A Society of Weak Men”

The fifth macro-narrative depicts liberal Western societies as increasingly dominated by sexual perversions and inhabited by “weak feminised men, males who are no longer men” and by women who have lost their femininity and are becoming more and more masculine. Liberalism – according to the outlet – deliberately seeks to erase people’s sexual identity by offering the possibility of changing their sex. Geopolitica.ru speculates that in the future, liberal societies will become so profoundly perverted that they may even allow people to choose whether they wish to remain human beings or change species and become non-human animals!

The sixth macro-narrative makes the apocalyptic claim that the Covid-19 pandemic is bringing about the collapse of liberal democracies and of liberal world order. The contributing authors for this outlet has joyfully announced that the pandemic represents “the end of globalization and of open society” and that Western democracies will be replaced by dictatorships led by military and medical élites which may be even harsher than Nazi and Soviet concentration camps.

Geopolitica.ru spreads propaganda and disinformation targeted at Western and other audiences (publishing in seven languages) with the goal of destabilising, undermining and eventually destroying liberal democracies and open societies.

It is hard to establish the impact of Geopolitica.ru’s Italian language site on Italian public discourse, but the site does amplify messages spread by high-profile individuals from radical “sovereignist” groups in Italy and publicizes many of their events. The outlet also serves as a meeting point and a discussion forum for Italian and European activists committed to furthering the resistance to “liberal globalism” and to Western post-modern values.