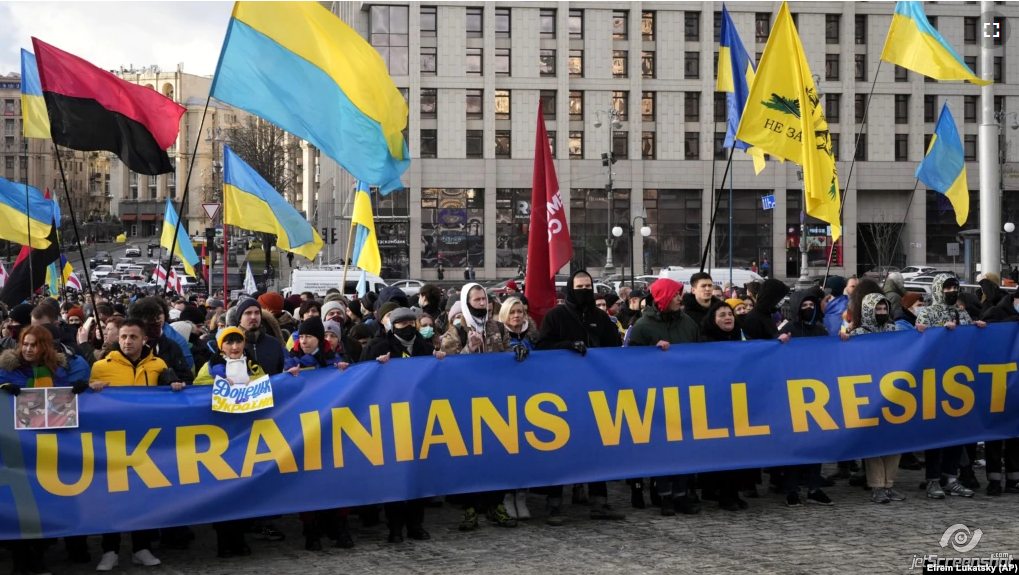 “For days, the U.S. has been playing up the threat of war and creating an air of tension. This has gravely impacted the economy, social stability and people’s lives in Ukraine.” (FALSE)

On February 16, a reporter with Russia’s state-run RIA Novosti news agency asked Chinese Foreign Ministry spokesperson Wang Wenbin for his assessment of the situation in Ukraine.

The reporter prefaced her question by noting that Russia’s Defense Ministry had announced some Russian troops were being moved away from the border with Ukraine, and from Crimea, “following military drills.”

The reporter said the alleged pullback came after Western media competed “to predict the date of an alleged Russian invasion of Ukraine.”

“For days, the U.S. has been playing up the threat of war and creating an air of tension,” he said. “This has gravely impacted the economy, social stability and people’s lives in Ukraine, and added obstacles to advancing dialogue and negotiation between parties concerned.”

Wang cited a Russian accusation that the West “has resorted to ‘information terrorism’ on the Ukraine issue,” thanks to “the failure of Western propaganda.”

What’s destabilizing is Russia’s massive troop buildup on Ukraine’s border and a wave of Kremlin disinformation misrepresenting its prior attacks on Ukraine, fostering rumors and even demonizing Ukrainians as Nazi sympathizers.

Furthermore, Ukraine’s economy has been reeling ever since Russia attacked the country in 2014 and because of the resulting war and aggression from the Kremlin.

Although Russia now claims to have withdrawn some troops, the United States and its allies claimed on February 16 that Russia is actually bringing up more forces.

As tensions have ramped up in recent months, Ukraine for years has felt the economic and social impacts of Russia’s illegal annexation of Crimea and clandestine invasion of eastern Ukraine.

Vasyl Myroshnychenko, CEO of CFC Big Ideas and a co-founder of the Ukraine Crisis Media Center, told Investment Monitor that Ukraine has “been struggling to attract foreign capital” for eight years.

According to Jorge Guira, associate professor of law and finance at the U.K.’s University of Reading, Russia’s troop buildup “may be a bluff to weaken the Ukrainian economy and sow European discord.”

“Kyiv’s economy is torn to shreds … a small matter, but pleasant,” she tweeted, adding that the “departing tanks” could return just as quickly.

Further undermining Ukraine’s social and economic stability, Ukraine’s defense ministry, army and banking systems were hit with cyberattacks on February 16. A top Ukrainian cybersecurity official called the cyber operation the largest of its kind in the country’s history, The New York Times reported.

Ukraine’s minister of digital transformation, Mykhailo Fedorov, said the cyberattacks were “meant to destabilize, to sow panic, to do everything to create a certain chaos in the actions of Ukrainians in our country.”

“We know today that, unfortunately, the only country that is interested in such strikes on our country, especially against the background of mass panic over a possible military invasion is, unfortunately, the Russian Federation,” the Times quoted him as saying.

The White House warned earlier in February that “Russia could use cyberattacks as part of its efforts to destabilize and further invade Ukraine.”

The threat of a Russian invasion has also prompted some insurance providers to refuse airlines coverage for operations in Ukrainian airspace.

On February 14, the Kyiv Independent reported that Ukraine’s infrastructure ministry had announced a $590 million fund for “guaranteeing the safety of flights through Ukraine for insurance companies, reinsurers, leasing companies and airlines.”

Some airlines were already avoiding flying in portions of Ukraine’s airspace after a Russian missile system was used to down Malaysia Airlines flight 17 over eastern Ukraine on July 17, 2014. That attack killed all 298 people on board.

On February 15, the Joint War Committee, a maritime insurance advisory body, added Ukrainian and Russian waters in the Black Sea and the Sea of Azov to its “JWC Hull War, Piracy, Terrorism and Related Perils” — its highest risk category.

The JWC says shipping companies operating in these areas “are required to notify [insurance] underwriters of voyages. “

On February 10, Ukraine’s Ministry of Foreign Affairs accused Russia of blocking parts of the Sea of Azov, the Black Sea and the Kerch Strait (which connects the two seas) “under the pretext of holding regular naval exercises.”

Elisabeth Braw of the American Enterprise Institute, a Washington, D.C.-based think tank, wrote that the “JWC’s decision could mean serious delivery disruptions for Russia and Ukraine.”

“Ukraine thus faces the loss of many of the 1,000 ships that call [to the region] each month. And companies will struggle to deliver the country’s top imports—which include refined petroleum, packaged medicines and coal briquettes—via air or rail,” Braw wrote.

Russia has repeatedly been accused of blockading Ukrainian shipping through the Kerch Strait.

In November 2018, after firing on Ukrainian ships and detaining Ukrainian sailors earlier that month, Ukraine’s then Minister of Infrastructure Volodymyr Omelyan told Polygraph.info Russia had instituted an “economic blockade of [the] Azov Sea.”

The issue has persisted.

In December 2021, Ukraine’s Navy said Russia “has blocked about 70 percent of the Azov Sea.”

Still, some senior Ukrainian officials have accused the United States and Western media of damaging Ukraine’s economy by talking up the possibility of war.

At that time, Oleksiy Danilov, the secretary of Ukraine’s National Security and Defense Council, told The Associated Press that 120,000 Russian troops were concentrated near Ukraine. He said then that they could stage provocations, but that his government had not seen preparations for a full-scale invasion.

“The preparatory period that will be noticed by the entire world could take from three to seven days,” Danilov said. “We aren’t seeing it yet. We clearly understand what’s going on and we are calmly preparing for it.”

Danilov also criticized Germany for refusing to provide arms to Ukraine. At the same time, Zelensky asked for and received weapons from the United States and other NATO countries to protect against a potential Russian invasion.

David Arakhamia, who leads Zelenskiy’s Servant of the People faction in Ukraine’s parliament, accused some Western media outlets of spreading “blatant fake news” about the threat of a further Russian invasion of Ukraine, and said that such reports were costing the country “2-3 billion dollars every month,” The New Voice of Ukraine reported. Arakhamia provided no evidence for that figure.

“Its total volume in recent weeks and months has exceeded 1.5 billion dollars, while a total weight of defensive weapons and military equipment delivered to Ukraine has gone beyond 1,000 tonnes,” Kuleba said.

On February 14, the U.S. State Department announced it was “offering a sovereign loan guarantee to Ukraine of up to $1 billion.”

The State Department also noted that the United States “has provided over $2 billion in development assistance to Ukraine since 2014.”

A senior U.S. official told CNN that “Putin has been caught off guard” by some of the intelligence releases. CNN reported that “intelligence intercepts have picked up Russian military and intelligence officials grumbling about the exposure of their plans.”