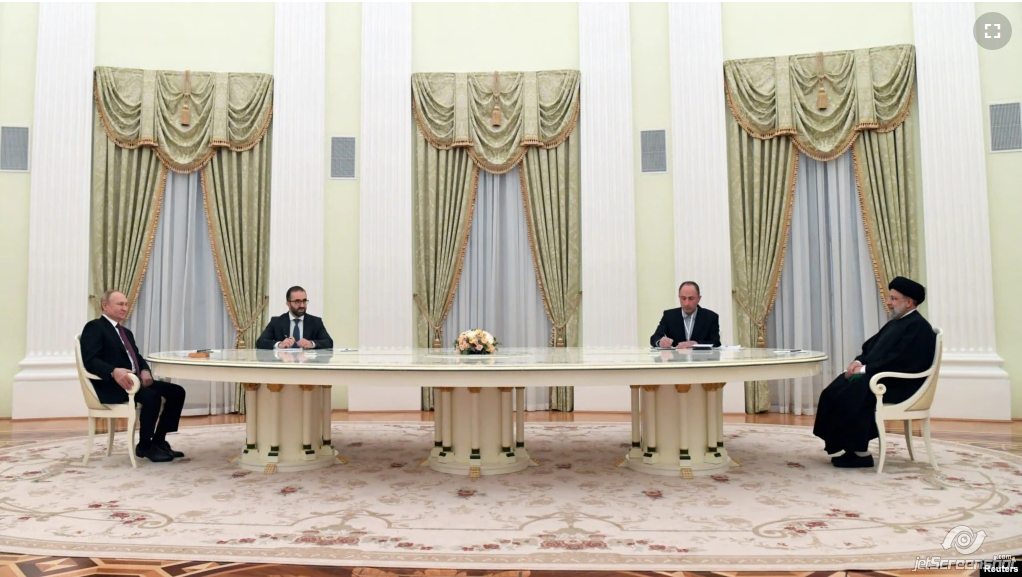 “Based on the fundamental principles of its foreign policy, the Islamic Republic of Iran opposes both hegemony and submission to hegemony, and gives its backing to the right to all nations to self-determination.”

On February 27, Iranian President Ebrahim Raisi said Tehran understands Russia’s security concerns about the expansion of the North Atlantic Treaty Organization (NATO). Raeisi said protecting the national integrity and sovereignty of all countries is important, and that all parties to the “Ukrainian conflict” must adhere to international obligations.

“Based on the fundamental principles of its foreign policy, the Islamic Republic of Iran opposes both hegemony and submission to hegemony, and gives its backing to the right to all nations to self-determination,” Raisi said.

In exchange, Moscow supports Tehran in the nuclear talks, as well as Iran’s steps to expand its regional influence and reduce the impact of U.S. sanctions.

The Ukrainian crisis arrived at what may be the final hours of the Iran nuclear talks. All parties involved in the negotiations say progress has been made to revive the Joint Comprehensive Plan of Action (JCPOA), the 2015 treaty under which Iran agreed to stop making weapons-grade uranium.

In the talks, Iran continues to press for its elite Islamic Revolutionary Guard Corps to be taken off lists of terrorist organizations, and for the International Atomic Energy Agency (IAEA) to drop its claims about Tehran’s nuclear activities, like questions regarding uranium traces found in undisclosed sites.

In 2018, then U.S. President Donald Trump withdrew from the JCPOA and reimposed sanctions on Iran, after which Iran stepped up its nuclear activities. European signatories worked to salvage the agreement.

The U.S. government said the war in Ukraine would not halt negotiations with Russia to stop Iran from advancing its nuclear work. U.S. State Department spokesperson Ned Price said Washington will continue negotiating with Russia on issues “fundamental to our national security interest,” including the Iran nuclear talks.

“The fact that Russia has now invaded Ukraine should not give Iran the green light to develop a nuclear weapon,” Price said.

Russia and Iran grew closer after Trump took office in 2017, according to Ardavan Khoshnood, an Iran expert at the Middle East Institute, a Washington, D.C., think tank.

Khoshnood said Moscow sees Iran as a counter to U.S. aspirations in the Middle East. Iran and Russia have coordinated their efforts in Syria and other countries.

Tehran’s relationship with Moscow grew stronger under former President Hassan Rouhani, who praised and expressed “gratitude” to Putin in a 2021 meeting.

Tehran turned to Russia for economic support after decades of Western sanctions. In 2021, then Iranian Energy Minister Reza Ardakanian announced Tehran had received a 1.2 billion euro loan from Russia to build a thermal power plant in south Iran.

According to Anna Borshchevskaya of the Washington Institute, another U.S. think tank, Putin’s policies toward Iran and Ukraine are linked by an anti-Western strategy.

“Although Moscow has always preferred a non-nuclear-armed Iran, it does not necessarily share Western goals, methods, or red lines on this issue,” she wrote in January. “The Kremlin has supported sanctions against Tehran while simultaneously working to dilute them, claiming that Western concerns were overblown and were hurting its efforts to expand bilateral trade with the Islamic Republic.”

In 2014, the year Russia illegally annexed the Crimean Peninsula from Ukraine, Tehran signed a deal with Moscow to build up to eight nuclear reactors in Iran.

In September 2016, Iran announced a 10-year agreement with Russia to help build a second nuclear power plant. That was just a year after Iran signed the JCPOA with Western countries.

Russia has also been a major weapons supplier for Iran. Robert Czulda, a scholar and professor of international relations, wrote for the Atlantic Council that Iran has been a customer of Russia’s defense industry since the end of the Iran-Iraq War in 1988.