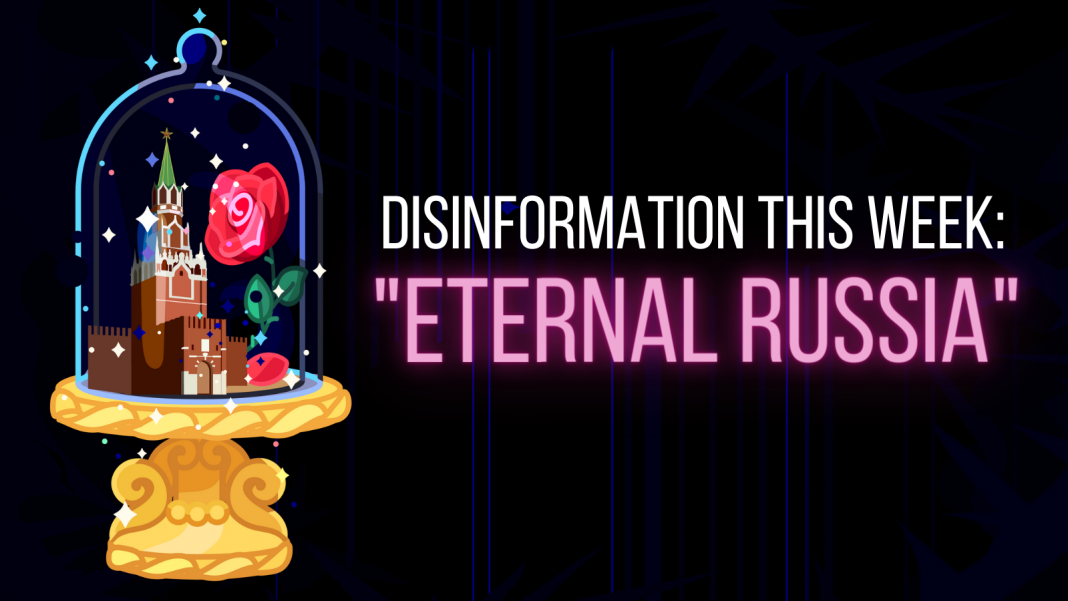 Time is one of the most fascinating concepts the mind has come up with. How one understands it, has far-reaching consequences, including for spread of disinformation.

Snyder shows that the Kremlin has adopted an eternity narrative. Not surprisingly, this draws on religious iconography. We have covered stories presenting a continuum from Vladimir the Great until (possibly) Vladimir Putin. The differences between a 12th century princedom, surrounding Kiev, or Russia as part of totalitarian state as the Soviet Union under Stalin are swept aside. Trivial. Something else matters: those strong leaders are all appearances of the same holy Russia, in a divine cycle.

Eternity can come in handy. According to pro-Kremlin media, Crimea is a component of the eternal Russia. The claim that the inhabitants of Crimea want to live in Russia is also part of this. According to the pro-Kremlin media this week, the result of the referendum on the peninsula is sufficient proof. Just to be clear, no international body recognises this so-called referendum. The UN General Assembly adopted a resolution explicitly stating it was not valid. This week, we published an article on several disinformation avenues aiming to legitimize the illegal annexation.

Both the inevitability and eternity narrative, Snyder demonstrates, necessitate intolerance of those disagreeing. By questioning the narrative’s supposed truth, one removes himself from the community of faithful.

This helps understanding how pro-Kremlin media operate. Conceptually, they work as “tribune”. Its characteristics: top-down communication, loyalty to hierarchy and just two types of expression: praise or condemnation. Its signature punctuation mark is the exclamation point!

Let us take an example from this week. If investigative journalists, such as those of Bellingcat, come up with uncomfortable results of investigation, you do not focus on the research itself, instead you attack the collective, portraying it as a factory a of fake. As the pro-Kremlin media have their own factory, the language also betrays a large deal of projection.

Media in democracy behave differently. Ideally, they contribute to a space sometimes called the herrschaftsfreie Kommunikation. It has the following features: peer-to-peer communication and a critical attitude by nature. Its core activity: independent questioning. Its signature punctuation mark is the question mark.

The rule of law is essential to protect this media freedom. Therefore, it is only logical that pro-Kremlin media often attack the European Court of Human Rights.

Why are Eternity and Disinformation Necessary?

Why does the Kremlin need eternity? According to Snyder, and many others, the Russian Federation seriously weakened its mechanism for leadership succession. The transfer of power from one elected leader to another is perhaps the ultimate feature of democracy. The Kremlin needs a narrative to legitimize this succession gap. Eternity provides the answer.

An eternal, holy and innocent empire needs a threat. This week we saw ample support for this fiction:

A threat becomes more credible if one has an enemy. This explains the attention for the US. Last week we saw the following claims:

When you depend on eternity, change becomes an existential threat. What symbolizes potential change the best? Indeed, a serious opposition challenger for leadership succession. This is the reason for the ocean of disinformation against Alexei Navalny. This week, we added yet another narrative aiming to undermine the fact of the poisoning of the opposition leader by Russia.

Fear of change also drives the many disinformation narratives on elections, the succession mechanism in action. It especially targets neighbouring countries, because the pro-Kremlin media fear successful elections might inspire the Russian people. This week we saw a claim trying to undermine the election of Nikol Pashinyan in Armenia. According to pro-Kremlin media, his election resulted from a colour revolution (supported by the West in 2018). Regular readers of our disinformation review know we have seen many similar cases on Belarus, Ukraine and Moldova.

Although they would not admit this, in the eyes of faithful pro-Kremlin media, Russia failed to become like the West, so the West needs to become like Russia. This explains why so much effort and money is invested in destabilizing the US and the EU through disinformation campaigns. According to Snyder, because the Russian model is not a credible alternative economically, legally or politically, the pro-Kremlin media zoom in and attack culture, values – and sexual minorities.

Over the years, we have seen many cases on LGBT rights, sex and even several about Danish zoophilia, all advancing a recurring pro-Kremlin narrative painting Europe as a cesspit of deprivation and moral decay.

This week we could add another case to this strange collection: the claim the European Parliament has recently passed a resolution demanding that Masha and the Bear, a popular Russian children’s cartoon, feature gay, lesbian, and transgender characters. This claim is false too.