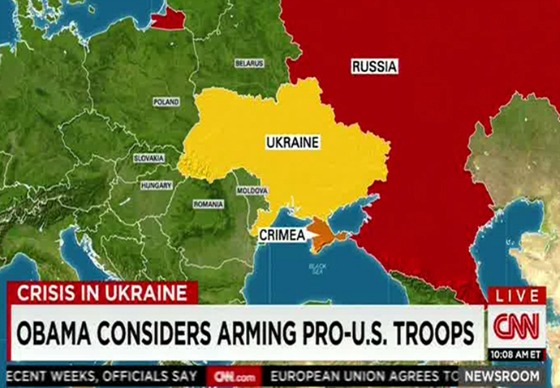 Western observers of the increasingly deadly conflict in eastern Ukraine between the separatist forces armed and supported by Russian troops and soldiers loyal to Kiev have long opposed the practice of dubbing the insurgents “pro-Russian forces.” It is an epithet that misleads and obscures more than it illuminates.

Those supposed “separatists” largely did not exist before Russia manufactured them. They sprang up from obscurity just as Russia sought to destabilize its neighbor following the invasion and annexation of the Crimean Peninsula. These militias continue to operate due entirely to the logistical support they receive from Moscow. The insurgency likely would have failed long ago were it not for Russia’s direct and unconcealed intervention into the conflict in Donetsk and Luhansk Oblasts. NATO has stopped pretending that the uprising in eastern Ukraine is some form of organic rebellion. According to independent polling, even the residents of those areas in supposed revolt do not support breaking away from Ukraine. Calling the rebels “pro-Russian” rather than simply “Russian” is a misnomer.

But that is the paradigm to which the Western press is committed. And, surely, if the insurgents in Ukraine’s east are “pro-Russian,” those forces that oppose the fracturing of that nation must be “pro-U.S.” At least, that was how CNN framed the conflict in Ukraine in a report on Monday:

This chyron has provided Moscow with an invaluable propaganda tool. Russia has long claimed that the conflict in Ukraine was ignited by the Western powers who inserted themselves into the burgeoning conflict in order to thwart Russian-speaking Ukrainians’ desire for autonomy, security, and self-determination. The Kremlin maintains that there would be no conflict in Ukraine if the West acceded to the popular will which Russia contends supports the creation of pro-Moscow puppet republics all along the Black Sea coast.

This seemingly innocuous chyron error has had significant geopolitical implications. “Online comments are calling it a Freudian slip, claiming it unmasks the true agenda behind the conflict,” the Kremlin-funded propagandist outlet RT averred.

“A political dispute in Ukraine became a Ukrainian civil war. Russia backed one side; the United States and NATO, the other,” the notorious Russian apologist and New York University Professor Stephen Cohen recently said. “So it’s not only a new Cold War, it’s a proxy war.” CNN provided Cohen and those around the world who agree with him with all the rhetorical ammunition the needed in order to make this claim convincingly.

The damage done, CNN’s Carol Costello issued a brief apology for the chyron debacle and expressed her personal regret for the error:

But none of this is Costello’s fault. She did not write or approve of the banner that ran during her program. Costello can take the hit for this if she chooses – lord knows that if she was not even moved to offer an on-air apology after delighting in Bristol Palin’s physical assault, she will face no consequences for this geopolitical row – but her network would be passing the buck if they were to make her a scapegoat. Someone fell asleep at the watch on this one, and it could have significant morale-boosting potential for separatist fighters in eastern Ukraine.

I suppose an apology is due, but it is not really sufficient if CNN’s aim is to undo the damage done to Kiev’s effort to secure Ukraine’s territorial integrity and the West’s desire to save the post-Cold War European peace from shattering. When the stakes are as high as they are, perhaps it would behoove CNN to consider something a bit more thorough than a perfunctory apology from someone who had nothing to do with this disaster.
By Noah Rothman, Hot Air