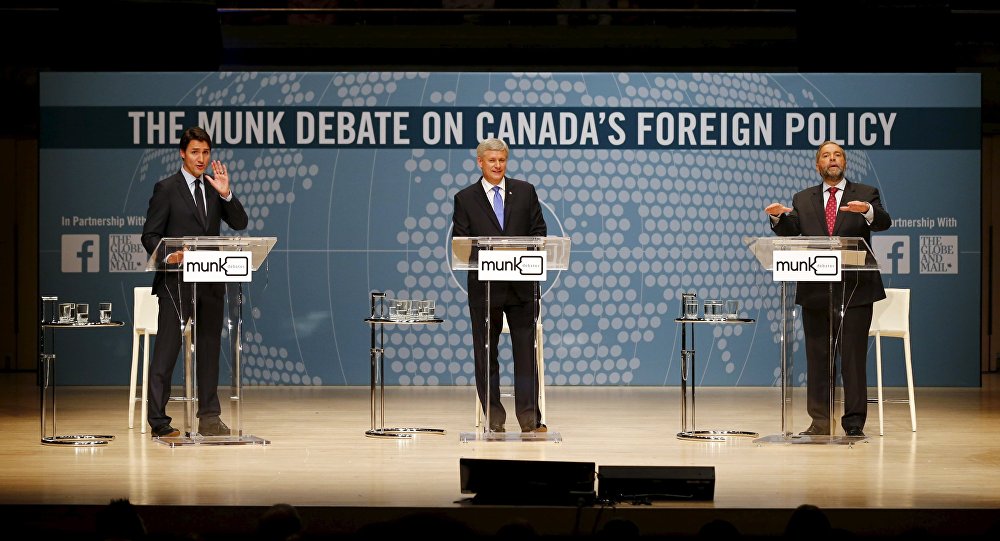 Sputnik News, dubbed the “Buzzfeed of propaganda,” has been paying particular attention to the current Canadian federal election. And it is bizarre.

The news agency’s headlines paint a bleak, and unfailingly pro-Kremlin, view of the Canadian campaign, employing headlines such as “Cold as Ice: All Three Major Canadian Parties Vow to be ‘Tough on Russia,'” “Meet Canada’s Parliament Candidate Who Had No Idea About Auschwitz,” and “Are Canada’s Elections at Risk of Becoming as Corrupt as America’s?”

The online news network, which also runs radio broadcasts and English-language television in Europe, is directly run by the Russian government and was created by a decree of Vladimir Putin — though you wouldn’t know that from the news outlet’s Wikipedia page, which is frequently scrubbed of any suggestion that it operates with pro-Putin bias.

The outlet rarely pays attention to Canadian news, but coverage has picked up as Canada’s three main political parties have been vying to form a government — and occasionally name-dropping Putin along the way.

Sputnik wrote a long piece looking at the three-way debate on Canada’s foreign policy held on Sept. 29, where all three party leaders vowed to keep up the pressure on the Kremlin.

“It doesn’t seem that the icy relationship between the two northern neighbors will thaw any time soon, regardless of who wins the parliamentary elections next month,” Sputnik’s coverage of the debate concludes.

The story picks up on the fact that when Justin Trudeau, leader of the centrist Liberal Party — and scion of former prime minister Pierre-Elliott Trudeau — answered a question about sitting face-to-face with the Russian president, the audience broke out in laughter.

Sputnik also notes that when the senior Trudeau was in power, he “actually sought to mend relations with the Soviet Union, and to break out of the East vs. West mentality.”

The agency’s news coverage frequently hones in on issues that get scant attention in Canada. VICE News reported in June that Sputnik picked up on an otherwise unreported story about Canada skipping its turn to patrol Iceland’s airspace in favor of continuing a training mission in Eastern Europe designed as a show of force against Moscow.

In a section about Canada’s role in the Ukraine “crisis,” Sputnik writes that Canada voted against a UN resolution condemning the glorification of Neo-Nazism — which Canada, the US and Ukraine all voted against it, arguing it could limit freedom of expression.

They also write that Ottawa was “embroiled in scandal” over its decision to give shelter to anti-regime protesters during the Euromaidan uprising in Kyiv — which is a revelation that garnered some news coverage but that never amounted to a ‘scandal.’

They also report that “a scandal also blew up” over Canada’s “possible involvement” in training ultranationalist and neo-Nazis as part of its training mission with the Ukrainian military — a claim for which there is no evidence and which the Canadian military has expressly denied.

Sputnik’s coverage is often completely at odds with how the same story is reported in the West.

By comparison, Canadian state broadcaster CBC ran a story the week prior, reporting “Canada’s refugee acceptance falls far short of Stephen Harper’s claims,” as most domestic media focused on criticism that Ottawa was doing too little for refugees.

A Sept. 24 report carried the headline “Are Canada’s Elections at Risk of Becoming as Corrupt as America’s?” and reported that Canada’s main election body was warning of “American-style electioneering and voter suppression.”

Sputnik’s story stemmed from a leaked presentation that suggested American efforts to target and discourage voters from going to the polls could theoretically be replicated in Canada, and that it should be monitored.

Sputnik also penned an article on a candidate for the New Democratic Party who admitted she had never heard of the Auschwitz concentration camp, after making a penis joke at its expense, and published another about Trudeau’s plans to legalize marijuana.

Sputnik’s content, which is usually kept short and laden with embedded Tweets, is in contrast with RT, Russia’s other state-run English-language news website that has faced years of accusations of bias.

“No room for anti-Israel commentary in Canadian politics,” reads one web article for the news agency, which also runs a television network.

“It would seem the height of Orwellian doublespeak to eliminate a political candidate for calling a war crime a war crime,” the story begins, before reporting on an NDP candidate who was turfed after old Facebook posts emerged where he referred to Israel’s activities in Gaza as “ethnic cleansing.”

As Foreign Policy author Elias Groll puts it, “like RT, Sputnik slickly remixes President Vladimir Putin’s brand of revanchist nationalism for an international audience, presenting the United States as an ailing imperial power bent on holding on to its domains. But whereas RT functions more like a tabloid news service, Sputnik looks to be presenting a kind of propaganda that’s very much rooted in 2014.”