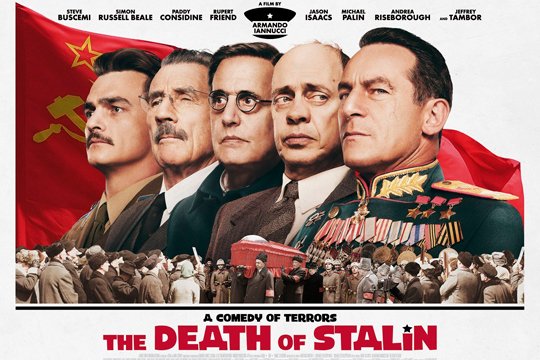 Armand Iannuci’s new British film, The Death of Stalin: A Comedy of Terrors, is presenting some real problems for the Russian authorities. On the one hand, banning the film will only attract more views to it online if not in theaters and make “banned in Moscow” almost as much a selling point as “banned in Boston” used to be in the US.

And on the other and more seriously particularly now, Moscow’s decision to ban this film is prompting leading Russians to ask why the Kremlin allowed the “Mathilda” film about Nicholas II to be shown but won’t allow “The Death of Stalin.”

Novaya gazeta reported that the Russian culture ministry after initially giving the green light to the showing of “The Death of Stalin” backed off after getting clear signals from Kremlin-controlled media that Russians or at least those who claim to speak for them view it as an insult to their country.

But that decision only made the situation of the authorities more untenable, Russian Orthodox and nationalist writers said. Igor Romanov of the Bereg Rus portal said that this decision, coming on the heels on one allowing the scandalous film about the love life of the last tsar, Nicholas II, was the real insult.

Allowing “Mathilda,” he said, showed that the authorities in Moscow were prepared to spit on the Russian people. Showing “The Death of Stalin” would have been yet another case of that. But by allowing the first but not the second, “the authorities chose which [insult] involved the larger consequences.”

“The decision,” he said, “was taken not on spiritual or moral bases but by a simple calculation of political consequences. For the holy tsar,” these officials appear to think, “people would pray and then go home. But for Stalin, they might decide to throw a Molotov cocktail at theaters.”

And the editors of Russkaya liniya, a prominent Orthodox and Russian nationalist site, declared that what happened this week shows that “Stalin for the Russian culture ministry is much more important than Emperor Nicholas II and the feelings of believers”.

The powers that be in Moscow may soon discover, the site suggested, that many Russians, including conservative and Orthodox ones whom the Kremlin wants to attract to its side in advance of the March 18 elections may feel very differently and remember on voting day what Moscow did now.

Meanwhile, a liberal Russian commentator, Kirill Martynov of Novaya gazeta told Echo Moskvy that this latest ban may highlight someething even more dangerous that just differences on Stalin and Nicholas II: Moscow, he suggests, is “paralyzed” by struggles in the name of public morality because it can’t offer any real actions.