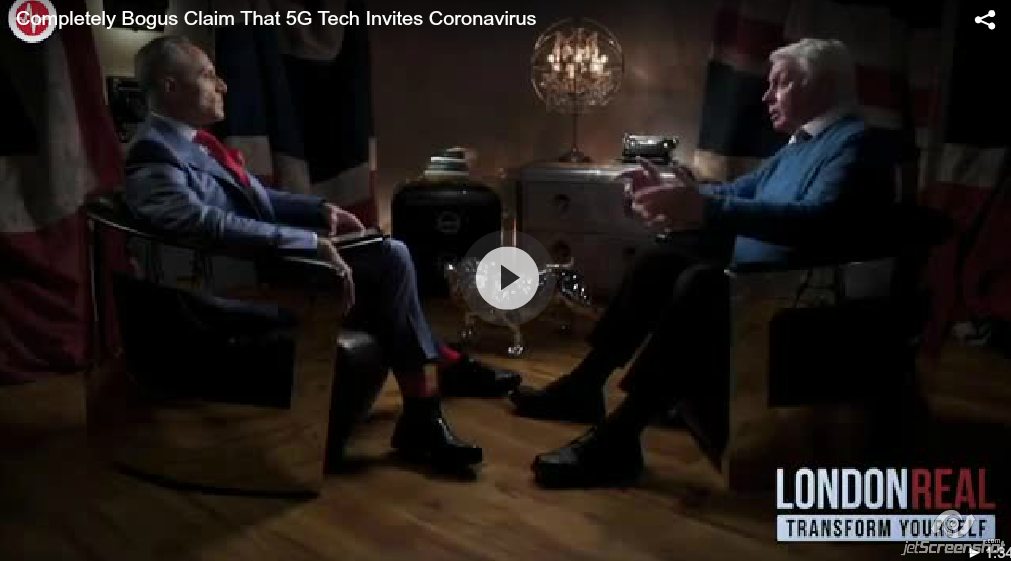 David Icke
Author, conspiracy theorist
“What does 5G do? What does 4G do that 5G but even more? It poisons the cells, which get poisoned by technological electromagnetic fields.”
Source: London Real, April 6, 2020
False
There is no scientific evidence that 5G harms cells.

The COVID-19 coronavirus pandemic has breathed new life into anti-5G wireless conspiracy theories. Believers claim that the new mobile internet system will cause a host of maladies either directly or indirectly by weakening the immune system.

British ex-footballer and well-known conspiracy theorist David Icke, who once claimed the world is secretly run by shape-shifting “reptoids,” gave an interview to the online London Real TV show in which he claimed there is a link between 5G and the COVID-19 outbreak.

“It poisons the cells, which get poisoned by technological electromagnetic fields,” he said. “The cells get poisoned. They release exosomes, as an immune response, and they test (positive) for COVID-19.”

Icke went on to claim that Wuhan was the first Chinese city to roll out 5G service, just before the coronavirus outbreak.

Both of his claims are false.

First, Wuhan was among a number of cities in China that were the first to get equipped with 5G service. Others included Beijing, Shanghai and Guangzhou, which are all larger than Wuhan.

More importantly, there is no scientific evidence that 5G signals adversely affect human cells. The technology relies on radio waves, like many other devices. This radiation is non-ionizing, meaning it cannot destroy the DNA of cells. People are exposed to this kind of radiation on a daily basis.

Also, because 5G operates at a higher frequency than older 4G technology, its waves are absorbed more superficially and do not penetrate as far into the body.

The World Health Organization has also found no evidence that 5G adversely affects health. It even created an infographic for its website’s “Myth busters” section. However, the WHO apparently misunderstood the claims being made about 5G and coronavirus by implying that anti-5G conspiracy theorists are saying the networks actually spread the virus. The conspiracy theorists falsely claim that 5G weakens the immune system, making one susceptible to the coronavirus.

YouTube removed the Icke interview on April 7 after it was live-streamed on the platform. The company told the BBC that it determined the video violated its new rules against “promoting medically unsubstantiated methods to prevent the coronavirus in place of seeking medical treatment.”

However, the video remains up on London Real TV’s website, as well as on Alex Jones’ Infowars, another purveyor of conspiracy theories as well as unproved medical cures.

While the fear of 5G, like the fear of cellular phones in the early 2000s, may seem like harmless crankery, some have taken the claims very seriously. Cellular towers reportedly have been attacked and set on fire in the United Kingdom and the Netherlands.