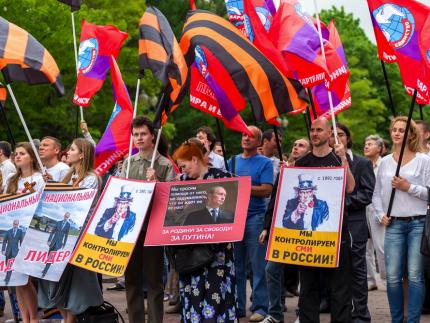 According to the conventional wisdom, Vladimir Putin and his Western supporters propagate a uniform message throughout the world. At its most extreme, this view sees Russia as having a formidable propaganda machine that is running roughshod over the Western media and public, writes Alexander J. Motyl in his blog.

In fact, Putin and his supporters and apologists often disagree. One reason may be that the machine just isn’t as formidable as it’s made out to be. Another may be that the Kremlin’s supporters make mistakes when interpreting or anticipating the frequently contradictory or incomprehensible statements of the Delphic oracle that is Putin. A third may be that they have difficulties bridging the growing gap between reality and Putin’s oftentimes shifting views. The Putinite interpretation—one that I won’t even bother refuting—is that disagreement is the foundation of vigorous democracies such as Putin’s Russia.

Putin is Russia’s unconstitutionally elected president; Migranyan is director of the Institute for Democracy and Cooperation in New York, a Kremlin front; vanden Heuvel, editor of the Nation, and Cohen, her spouse, are Putin’s cheerleaders on the American left.

Before looking at discrepancies, consider the most striking similarity: all four see the current crisis in Ukraine as the product of US intrigues (echoes of Jeane Kirkpatrick’s “Blame America First” speech many years ago).

Putin: “The events provoked in Ukraine became the concentrated expression of the notorious policy of containment.”

Vanden Heuvel and Cohen: “the Ukraine crisis was instigated by the West’s attempt, last November, to smuggle the former Soviet republic into NATO.”

What’s missing? Ukraine and Ukrainians, of course. None of the texts sees Ukrainians as agents with a voice: they are marionettes, following the dictates of Washington. That this view is completely at odds with what actually happened on the Maidan should be obvious. Far worse, denying Ukrainians agency and a voice is just an old racist trick. Obviously, blacks wouldn’t have demanded civil rights if some outside agitators hadn’t incited them. The women’s movement? A feminist plot. Ukrainians demonstrating in Kyiv? Stooges of the CIA.

Putin and Migranyan probably can’t see that this is racism. Vanden Heuvel and Cohen, who rightly rail against racism on the pages of the Nation, should know better. Shame on them all.

Now consider the differences between these three texts.

Putin sees NATO as a threat: “In the past 20 years, our partners have been trying to convince Russia of their good intentions, their readiness to jointly develop strategic cooperation. However, at the same time they kept expanding NATO, extending the area under their military and political control ever closer to our borders. And when we rightfully asked: ‘Don’t you find it possible and necessary to discuss this with us?’ they said: ‘No, this is none of your business.’”

So do Vanden Heuvel and Cohen: “twenty years of NATO’s eastward expansion has caused Russia to feel cornered.”

Migranyan disagrees with both Putin and the Nation, arguing that NATO is a failure: “With regard to the Ukrainian crisis, a serious topic of conversation is the net benefit to the West (and to the new countries) of NATO’s inclusion of the Baltic States, Poland, and some Balkan countries. As it turned out, strategists who advocated the endless expansion of NATO never dreamt that it would come at a cost. … In this regard, we need only recall the recent scandalous statement by Polish Foreign Minister Radek Sikorski, who … noted that no matter how much Poland tried to bend to US interests, it would only receive the illusion of security and stability in return. Today, it is clear to all that the strategic line followed by [President] Clinton on Russia and the former Eastern Bloc, as well as a string of strategic decisions by the Bush Jr. administration, were a total failure.”

No less embarrassing is the incoherence of the three texts’ defense of Russia’s Crimean landgrab. Here the authors both agree and disagree.

Putin: “What did our partners expect from us as the developments in Ukraine unfolded? We clearly had no right to abandon the residents of Crimea and Sevastopol to the mercy of nationalist and radical militants; we could not allow our access to the Black Sea to be significantly limited; we could not allow NATO forces to eventually come to the land of Crimea and Sevastopol, the land of Russian military glory, and cardinally change the balance of forces in the Black Sea area. This would mean giving up practically everything that Russia had fought for since the times of Peter the Great, or maybe even earlier—historians should know.”

Putin used to argue the invasion was necessary to save Crimea’s poor Russians from Ukrainian fascists. Now, everything but the kitchen sink seems to matter. Can any serious European statesman really believe that NATO forces would have been stationed in Crimea before Ukraine became a member of NATO (an eventuality that is highly unlikely in the short term and possibly longer)? Even more worrisome is how Putin links his imperialism to imperial Russia’s and himself to Peter the Great. Is that a sign of historical manipulation or megalomania?

Vanden Heuvel and Cohen: “the West’s jettisoning in February of its own agreement with then-President Viktor Yanukovych brought to power in Kiev an unelected regime so anti-Russian and so uncritically embraced by Washington that the Kremlin felt an urgent need to annex predominantly Russian Crimea, the home of its most cherished naval base.”

Putin invokes a phantom NATO threat, radical militants, and Russian imperialism. The Nation’s daring duo reduce Putin’s annexation to some bizarre (and physiologically painful!) “urgent need” and an irrational love for, of all things, a naval base!

Migranyan, meanwhile, has nothing coherent to say about Crimea. Except that even his incoherence rests on a contradiction. Thus, he insists that “Washington did not take into account the fact that Moscow had had no plans to take over Crimea or split Ukraine.” But then his language belies that claim: such phrases as “after Crimea’s return to Russia” and “the reabsorption of Crimea” (my emphasis) clearly suggest that he views Crimea as a natural part of Russia, which was merely “reabsorbing” what had always belonged to it.

Do these absurdities and contradictions matter? Personally, I’d like to think that coherence goeth before the fall.