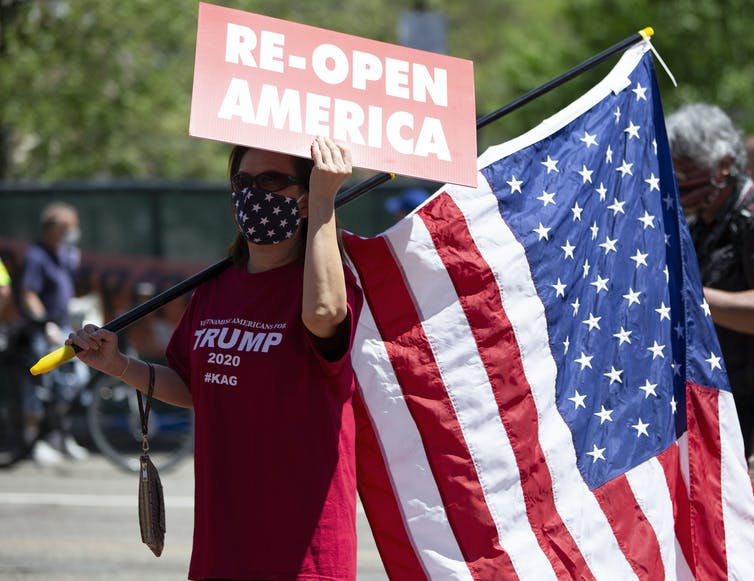 By Blyth Crawford, for The Conversation

Just as the global death toll from COVID-19 reached 250,000 at the start of May this year, a short film emerged that has since been called “the first true hit conspiracy video of the COVID-19 era”. Titled “Plandemic”, it featured a lengthy interview with the discredited scientist Judy Mikovits, who falsely argued that the COVID death tolls were being exaggerated to pave the way for a large-scale vaccination programme.

Allegedly orchestrated by “big pharma” companies in conjunction with Bill Gates, this scheme would supposedly “kill millions” in the name of generating profit. The video was removed from Facebook and YouTube where it had been shared, but not before it was watched an estimated 8 million times.

The perceived danger of an eventual vaccination programme has been one of the most concerning and far-reaching of coronavirus conspiracy narratives. But it has also been linked to attempts by the far right to exploit the pandemic to promote its extreme ideology.

Similar conspiracies are prevalent within far-right social media circles, but many of them degenerate into overt antisemitism, with claims the virus is a hoax engineered by “Jewish elites” intent on implementing a vaccine either for profit or to eradicate the white race. One journalist warned that the Plandemic video may be the first step in introducing new audiences “into the depths of the far-right abyss”.

By playing on people’s health fears in such ways, the far right is hoping to normalise its views and make those of the political mainstream seem inadequate when it comes to explaining or resolving the crisis. And it’s possible that the pandemic may be increasing public awareness of and even participation in extremist discourse.

A recent report from the United Nations Security Council warns that extreme right-wing groups and individuals in the US have sought to exploit the pandemic to “radicalize, recruit, and inspire plots and attacks”. This sentiment is echoed in a note from the Council of the European Union, which warns that it is “highly likely” right-wing extremists are now “capitalising on the corona crisis more than on any other issue”. It adds that this focus may have led to an expansion in target selection, with sites like hospitals being viewed as legitimate targets for large-scale attacks.

The far right’s focus on coronavirus has been reflected across social media. One recent report showed that between January and April 2020, hundreds of thousands of far-right posts about coronavirus were made to public Facebook groups. Meanwhile, conspiratorial narratives relating to “elites” – a staple of far-right discourse – steadily increased from mid-March.

Similarly, far-right groups on the encrypted messaging app Telegram have set up a range of channels dedicated specifically to the discussion of coronavirus, often amplifying disinformation. In March, Telegram channels associated with white supremacy and racism attracted an influx of over 6,000 users, with one channel, dedicated to the discussion of coronavirus, growing its user base by 800%.

One of the key ways the far right is doing this is by taking advantage of the staggering extent of misinformation and conspiracy theories surrounding the virus. The “plandemic” narrative is one example, but there has also been a significant rise in social media activity relating to the QAnon conspiracy movement, which has also amplified misinformation about the pandemic.

A number of these conspiracies have also been influential within the Reopen movement, which advocates for the lifting of lockdown restrictions. This momentum has been harnessed by some far-right actors, particularly the Proud Boys, an alt-right, “pro-west fraternal organisation”.

This group has historically attempted to market itself towards the Republican mainstream on platforms such as Facebook by deliberately avoiding the use of overtly racist symbols. Now a number of Proud Boys have been spotted taking part in anti-lockdown protests, with the group’s president, Enrique Tarrio, framing the Florida protests as the point where “the battle for the 2020 election starts”. This suggests he is using the protests as a propaganda opportunity for his movement.

Indeed, the spirit of the protests accords closely with narratives being propagated by some more overtly extreme facets of the right, suggesting the Reopen movement has presented an opportunity to popularise extreme anti-state messaging. For example, one alt-right figure used his Telegram channel to paint the lockdown measures as a “power grab” by the state, and an orchestrated attempt to ensure citizens – particularly men – remain “slaves” to society and the government.

Perhaps one of the most concerning groups that appears to have been buoyed by similar narratives is the “boogaloo’ movement, a loose online network of radical firearms activists that has been linked to several violent incidents across the US. It unites a wide variety of people, some of whom have attempted to associate with Black Lives Matter, and others with neo-Nazism, with a commitment to preserving their right to bear arms and a shared desire to incite a civil war in order to overthrow the government.

In place of a rigid political philosophy, the movement’s disparate followers are instead bound by in-jokes and memes. But some supporters have also demonstrated a propensity for violence, with several incidents this year leading to arrests, and three alleged followers now facing terrorism charges.

This activity has been matched by numerous online posts referring to insurrectional violence relating to the coronavirus. And unrest related to pandemic restrictions appears to have significantly boosted the profile of the movement.

Research has shown that the conspiracy theory that the US government is using the pandemic to restrict American citizens’ freedoms has been central in influencing calls for a civil war. Some Boogaloo supporters also believe that the pandemic and subsequent lockdown have helped raise awareness of their civil war narrative amongst wider populations.

The pandemic has certainly been fertile ground for far-right messaging, helping give new platforms to activists and movements. While it is impossible to predict the long-term effects of these events, the potential for the crisis to spread some elements of far-right ideology to more mainstream audiences cannot be ignored. Shifting those people away from these ideas may be as difficult as tackling the virus itself.

By Blyth Crawford, for The Conversation