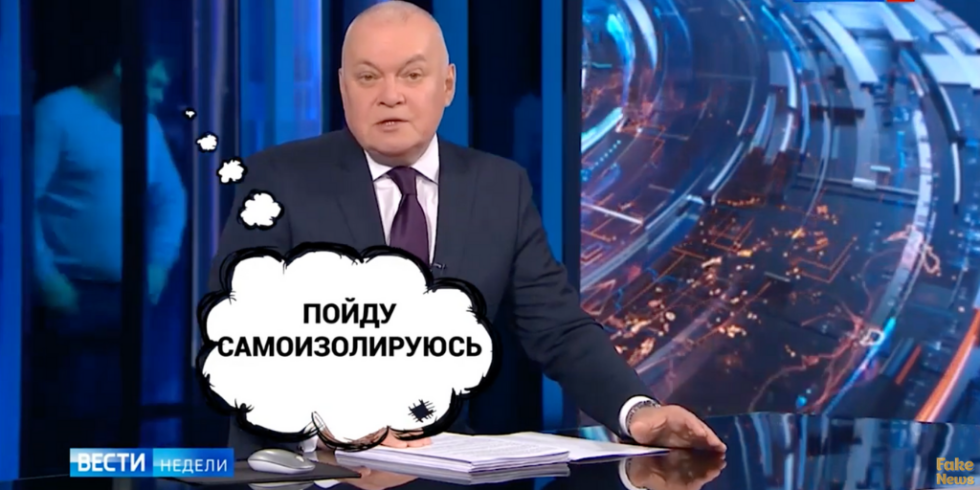 For good reasons, independent Russian journalists are in a better position than many others to see through the pro-Kremlin disinformation campaigns.

What has been the response of Russian fact-checking journalists to recent messages about the coronavirus in Kremlin-controlled media? And are we beginning to see changes in the way the disinformation is perceived in Russia?

Scientists, Putin, the EU and sanctions

The Insider is a Russian online outlet with a separate section called “Anti-Fake”, devoted to exposing and debunking disinformation in the pro-Kremlin media.

Over the last week, The Insider challenged state-controlled Channel One Russia (Pervy Kanal) for a number of claims. Among them were stories about Russian Scientists having been the first to map the coronavirus genome and about Vladimir Putin as the only leader in Europe who was brave enough to visit a hospital with COVID-19 patients.

The Insider has exposed how the EU-sanctioned state TV propagandist Dmitry Kiselyov manipulated reporting to build a story about “the EU collapsing”. Similarly, The Insider has looked at the way different pro-Kremlin media have struggled to build a narrative asking to lift EU and US sanctions against Russia in light of COVID-19.

The Insider has also criticised state-controlled NTV for spreading incorrect information about US medical personnel having to use plastic garbage bags to protect themselves. In another article, TASS was exposed for inaccurately describing the way medical insurance companies operate in the UK in connection with the epidemic.

The Chinese border and Donald Trump

Another important independent outlet in Russia is TV Rain, which broadcasts online via its website and on YouTube.

TV Rain has a weekly programme called “Fake News”. In its own words, the programme’s aim is to “review the main news programs and understand how they want to influence us through manipulating numbers, words and video.”

Under the headline “Window dressing and lies on TV around the coronavirus,” TV Rain’s journalists have challenged pro-Kremlin messages alleging a completely closed border with China. They have also criticised authorities for downplaying the seriousness of the situation in order to protect the referendum on the amendments to the Constitution planned for 22 April (the referendum has later been suspended).

In addition, TV Rain has reminded its audience of some of the conspiracy theories that have been promoted by Kremlin-controlled TV, including one suggesting that US president Trump could be behind the pandemic.

In its most recent broadcast, TV Rain criticised Channel One Russia (Pervy Kanal) for continuing to spread incorrect information about the coronavirus without clear indication of the difference between entertainment and news.

“The USSR is dying right before our eyes”

The questions asked by many experienced journalists these days are: What will the future bring? How long will Russian authorities continue reassuring citizens that “de facto, we do not have an epidemic now”, as they did on 26 March, while on Monday, 30 March, the city of Moscow introduced quarantine. How long will audiences continue to trust the information they receive on the state-controlled TV channels?

Nine days ago, we asked six Russian journalists and political analysts what to expect. One of them spoke about the return of the “information boomerang” – i.e. about the way the global nature of the COVID-19 pandemic threatens the Kremlin’s attempts to isolate Russia and monopolise the national narrative with propaganda.

In a tweet on Friday, journalist Konstantin Eggert gave his short assessment of the impact the coronavirus propaganda could have on the perceptions of the propaganda among Russian audiences.

Konstantin Eggert: With the growing epidemic, the USSR is dying right before our eyes–- this time in people’s minds. Very soon, everyone will stop worrying about the “horror in Ukraine,” and how the Baltic states are “deserted,” etc. The dislike of America, which “invented the virus,” however, will survive among many people. Do you agree?

Time will show if the focus will indeed shift from information attacks on Russia’s neighbour countries towards more of the already existing anti-US conspiracy theory thinking.