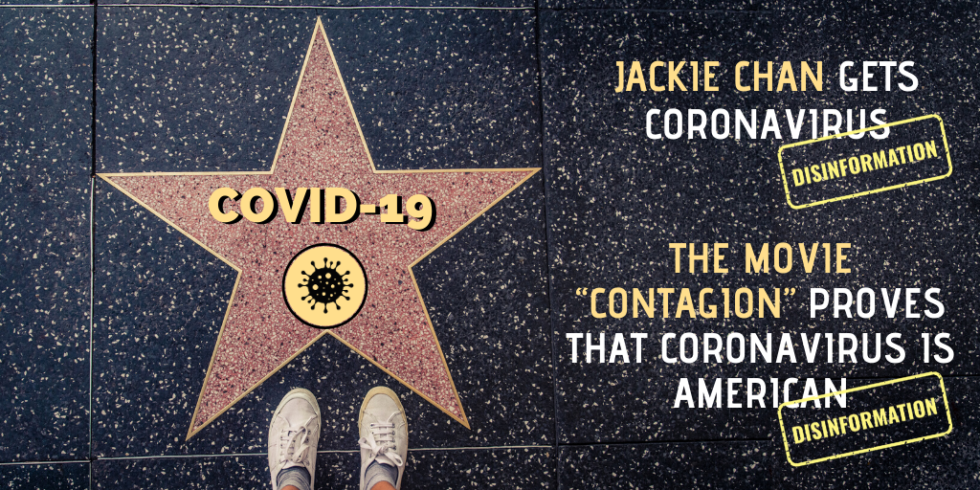 While the volume of disinformation cases about the coronavirus levelled off this week, their creativity did not disappoint. Besides the now-customary claims that the virus is a US biological weapon that has been deployed against China, intentionally spread by US soldiers on Trump’s orders, numerous pro-Kremlin outlets also reported that the famous actor and martial artist Jackie Chan had contracted the virus at a private party and is presently under quarantine.

The Hollywood references didn’t stop there: disinformation outlets jumped on the opportunity to exploit the popular parallels now being made to the 2011 movie “Contagion”, which tells the story of a fictional pandemic – coincidentally of a virus transmitted from animals to humans – that kills 26 million people in a single month. But RT took this comparison a step further, claiming that the film is evidence that the coronavirus is in fact an American invention and designed to selectively target America’s enemies.

Pro-Kremlin outlets accuse others of exaggerating the threat of the coronavirus and triggering mass panic. The irony, of course, is that they are pushing that very agenda themselves by deliberately spreading conspiracy theories and false information to sow chaos and fear.

Harvey Weinstein featured in this week’s cases as the poster boy of the West’s moral decay and assault on masculinity and traditional values. In his weekly show on Russian state TV, Dmitry Kiselyov – the head of Rossiya Segodnya and one of the Kremlin media’s most vitriolic characters who is also sanctioned by the EU  – likened Weinstein’s conviction for rape and sexual assault to the Stalinist show trials of the Great Purge. Not only was Weinstein supposedly caricatured as a “disgusting beast” by a vicious Western media, he was actually forced to take a hormone suppressant! That’s Western feminism and gender equality according to the Kremlin: the destruction of masculinity; turning strong men sick.

Indeed, there were several exceptionally nasty cases this week about the alleged moral degeneracy and perversion of Western society. America and the West more broadly are on their way to becoming Sodom and Gomorrah. The US government is using gender theories and identity politics to topple disobedient governments. The Soros network is destroying national and cultural identity and sexualising children to pave the way for legalising paedophilia. Even the Council of Europe – via its Convention on the Protection of Children against Sexual Exploitation and Sexual Abuse – is apparently in the business of defiling children. And if that’s still not enough, you can just say that the West is inventing a new species of human.

If there is one thing we envy the Kremlin’s disinformation agents, it is their creative freedom. Sometimes it’s hard not to play along. Maybe next week, the pro-Kremlin media will tell us that a US-made coronavirus mutation is sterilising men and turning women into super-feminist hermaphrodites?

Creative freedom aside, pro-Kremlin disinformation actors apparently have serious issue when it comes to political and civil freedoms. From the very top of the Kremlin leadership we heard this week that people organising non-sanctioned meetings in Sweden can be sentenced to five or ten years in prison. Russia, it was claimed, does not have such strict laws (arguably, 297 political prisoners identified by the Moscow-based “Memorial” human rights centre would disagree).

In fact, the right to manifestations is protected by the Swedish Constitution and the punishment for organising a demonstration without permission is up to 6 months in prison. Participation in a demonstration is still protected by the constitution. Sweden is one of the freest countries is the world, with a perfect score of 100 out of 100 in the Global Freedom Index. Russia is at the bottom of this index, with a score of 20 out of 100.

By attempting to compare Russia to liberal Sweden, pro-Kremlin disinformation actors attempt to portray themselves as role models of democracy. An awkward and unattainable goal for those who have invested so much into smearing liberalism and undermining political and civil liberties at every opportunity along the way.

EDIT: Clarification on Sweden’s law on public order; the right to participate in a demonstration is always protected by the constitution