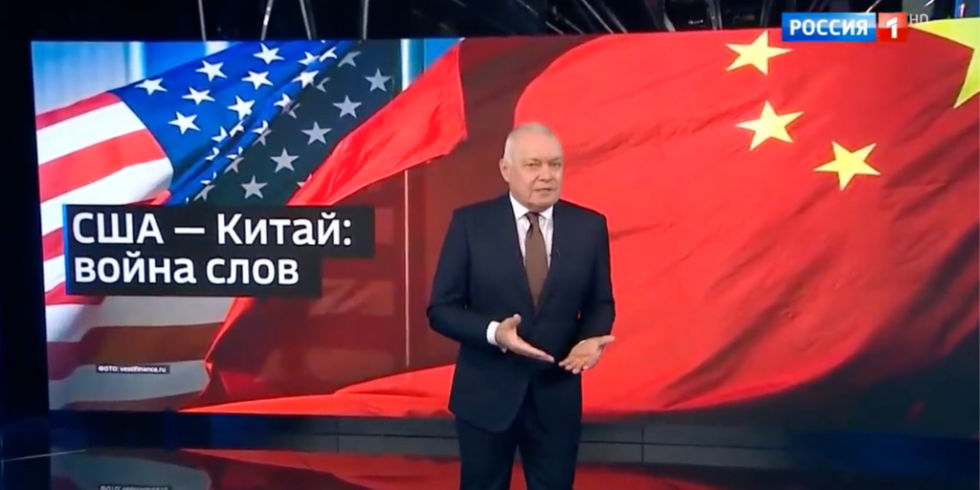 On 20 April, Russian TV lashed out against the US, defending Chinese authorities against criticism for their handling of the COVID-19 outbreak.

The broadcast on state-controlled TV Rossiya 1 came after contacts between Moscow and Beijing on the highest level.

RT (Russia Today) and the news agency RIA Novosti, both of which are likewise controlled by Russian authorities, followed a similar pattern with pro-Beijing COVID-19-related reporting.

“Of course, China is outraged”

The televised defence of Beijing was presented by the EU-sanctioned host Dmitry Kiselyov (top image). He compared criticism of the Chinese government to Russia being held responsible for the chemical attack in Salisbury and meddling in the 2016 U.S. presidential elections:

“Of course, China is outraged by the U.S. allegations of concealing information about the coronavirus and the debate that the pandemic arose as a result of the leak of the virus from a laboratory in Wuhan. There is no evidence. Only a lot of yelling.

We have already seen this more than once. For example, when Russia was accused of interfering in the American elections or when Russian special services were accused of poisoning the Skripal family in the U.K. So far no one has presented any evidence.”

As we already highlighted in the Disinformation Review, it is factually incorrect to say that there is no evidence of Russian responsibility in the U.S. election interference and the attack on Sergei Skripal and his daughter. Both claims are central to the ongoing pro-Kremlin disinformation campaign.

“Chinese media dispel myths about COVID-19”; “Biologist doubts bats caused pandemic”; “To survive, America must become China”; “China says there are no wild animal markets in the country”; “China appreciates Russia’s approach to the origin of coronavirus” and “[Russia’s] Foreign Ministry condemns attempts to blame pandemic on China and WHO”.

In the same period, RT published pro-Beijing messages on its English online edition under the following headlines:

The pro-Kremlin narrative was clear: Moscow and Beijing are in the same boat as victims of allegedly unjust accusations from the West.

The output of Russia’s largest media outlets – including Rossiya 1, RT and RIA Novosti – is centrally coordinated at regular meetings between Kremlin representatives and top media managers.

Independent Russian journalists have described how the narratives in leading Russian media outlets are managed from the top of the Kremlin.

The practice of top-down instructions about different topics has been described in detail, ranging from the coverage of protests in Moscow to the Queen of England’s anniversary.

Among the more spectacular examples is a case when alleged confusion over such instructions led to the announcement of a 146% election result in a Russian region.

Most recently, the independent online outlet Meduza has reported about disinformation targeting UK prime minister Boris Johnson being the result of centralised coordination at RIA Novosti’s headquarters in Moscow.