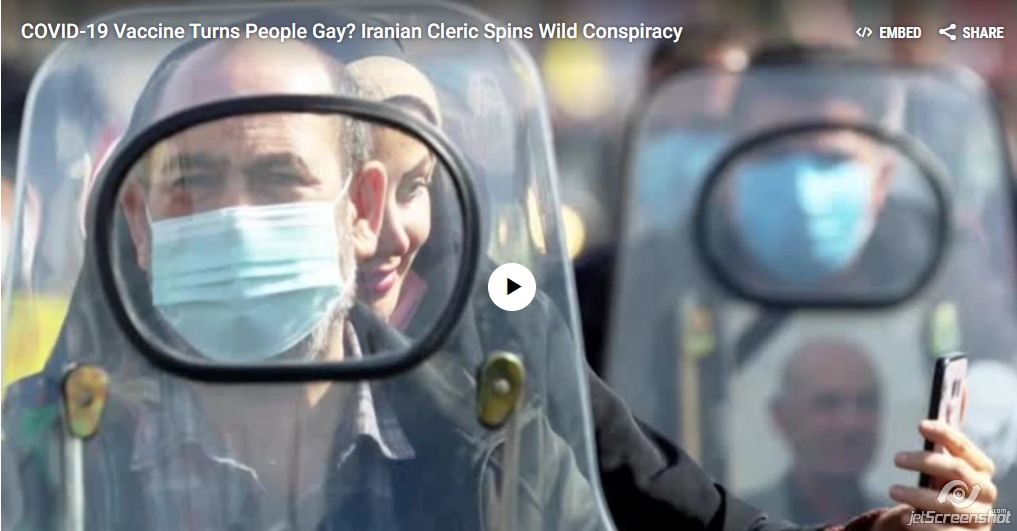 On February 2, a message posted on the Telegram channel of Iranian Cleric Ayatollah Abbas Tabrizian warned his 209,000-plus followers not to get vaccinated against SARS-CoV-2 (the virus that causes COVID-19).

“Do not approach those who have been vaccinated. Because they have microchips, they have been genetically modified,” the message attributed to Tabrizian read.

“[T]hey are outside of the human race, they act like controlled robots, they have lost the gene for faith, morality, and decency, and they have become homosexuals.”

Tabrizian, who calls himself “the father of Islamic medicine,” lives in the city of Qom, Iran’s religious capital. According to Radio Farda, the Iranian branch of U.S.-funded Radio Free Europe/Radio Liberty, Tabrizian has written several books on so-called “Islamic Medicine” and runs an Islamic Medicine Center.

He has previously claimed treating 150 people afflicted with incurable diseases a day, called modern medicine the work of “Zionists,” and rejected immunization as “colonialist medicine.”

Tabrizian’s comments were delivered two days before Iran received its first batch of the Russian-developed Sputnik V vaccine, with the first Iranian receiving the jab during a televised ceremony on February 8.

Tabrizian’s recent statements on novel coronavirus vaccination are a composite of old and new COVID-19 conspiracies. All of them are false.

Claims that the COVID-19 vaccination campaign is part of a “covert mass chip implantation” plot have previously been debunked. Allegations that Covid-19 vaccines alter a person’s DNA or can affect their sexual orientation are likewise baseless.

In March 2020, a conspiracy theory began circulating that Microsoft co-founder Bill Gates was looking to use COVID-19 vaccinations to implant trackable microchips into unsuspecting recipients.

The rumor began last March after Gates posted to a forum on the social message site Reddit about the Bill & Melinda Gates Foundation. He noted that the foundation had committed up to $100 million to help with the COVID-19 response worldwide.

Gates said the foundation aimed to “have some digital certificates to show who has recovered or been tested recently or when we have a vaccine who has received it.”

When asked to clarify what he meant by digital certificates, the Bill & Melinda Gates Foundation told Reuters it referred to “efforts to create an open source digital platform with the goal of expanding access to safe, home-based testing.”

Reuters, citing IBM, noted a digital certificate is an “electronic document” used to identify an individual. However, conspiracy theorists combined misinformation about digital certificates with an unrelated technology called quantum microdots, which is being developed with funding from the Bill & Melinda Gates Foundation.

One bogus conspiracy alleges that implantable microchips that dissolve under the skin will leave identifiable quantum dots that can be used as a form of ID. While it is true that “Quantum dot dye” would be delivered under the skin together with a vaccine, these signatures are not a microchip or human-implantable capsules.

Rather, they would function like an invisible tattoo that emits “near-infrared light,” showing a vaccination record. The signature could be read up close using a specially equipped smartphone and would not provide for remote tracking.

One such dye, developed by the Massachusetts Institute of Technology, is intended to provide for “rapid and anonymous detection of patient vaccination history” in areas lacking the infrastructure for electronic or even paper databases, researchers and experts said.

Many traditional vaccines introduce weakened forms of a virus to teach the body how to recognize and fight it. The U.S. Centers for Disease Control outlined how COVID-19 mRNA vaccines “give instructions for our cells to make a harmless piece of what is called the ‘spike protein,’” which are found on the surface of SARS-CoV-2.

After a vaccine recipient’s immune system recognizes that the spike protein should not be there, the body makes antibodies to fight it. “The benefit of mRNA vaccines, like all vaccines, is those vaccinated gain this protection without ever having to risk the serious consequences of getting sick with COVID-19,” the CDC said.

Gavi, the Vaccine Alliance, a partnership that includes the Gates foundation, World Bank, UNICEF and others, notes that “mRNA isn’t the same as DNA, and it can’t combine with our DNA to change our genetic code.” Gavi adds that being “relatively fragile,” the mRNA will only remain “inside a cell for about 72 hours, before being degraded.”

As for Tabrizian’s claim that the COVID-19 vaccination can affect sexual orientation, Sheina Vojoudi, an Iranian dissident, told the Jerusalem Post that Tabrizian is acting like other Iranian regime clerics in relating human flaws to sexuality.

“Actually, his goal of spreading nonsense is to try to scare people [out] of getting vaccinated, while the leader of the regime and other officials got Pfizer, and they don’t provide it for the people with the excuse that they don’t trust the West,” Vojoudi told the newspaper.

Tabrizian is not the only religious leader who has made such a claim.

In January, a Jewish ultra-Orthodox rabbi in Israel similarly claimed that “any vaccine made using an embryonic substrate … causes opposite tendencies [homosexuality].”

Tabrizian previously generated controversy when his Telegram channel posted a number of “Islam-based guidelines” on using facemasks to control the spread of Covid-19.

Those Telegram posts claimed that carrying and spreading infectious diseases was “unique to women,” adding that “if only women wear masks, this seems to be sufficient to prevent the spread of the coronavirus, and men need not wear them.”

Tabrizian later claimed that one of his students had posted those messages.

Tabrizian also claimed that oil from violet flowers effectively combats coronavirus. His suggestion that users dip cotton balls in the violet oil and take them as a suppository generated ridicule.

He further generated controversy in January 2020 after posting a video in which he burned Harrison’s Manual of Medicine, a leading medical reference book.

The World Health Organization has described the Islamic Republic of Iran as “one of the first countries in the world to experience a rapid progression of COVID-19.”

Iran is among the worst hit countries in the Middle East, with an estimated 1,473,756 cases and 58,536 deaths among its population of about 84 million.

In March 2020, an unidentified Iranian man in Qom claimed there was no room for viruses, germs or diseases” in the city’s mosques and shrines. However, the city was then the epicenter for the country’s COVID-19 outbreak.

In April 2020, an Islamic Revolutionary Guards Corps spokesman falsely claimed that the Islamic Republic had developed a new device which could detect COVID-19 “in real time.”