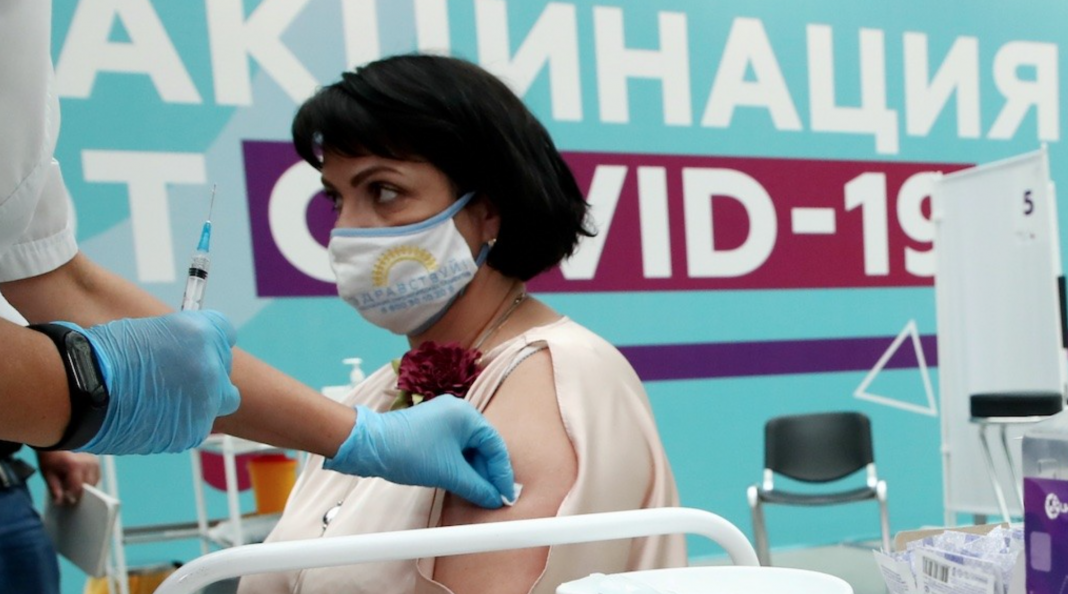 China and Russia have formed an opportunistic propaganda alliance to blame the U.S. for covid-19.

“Who’s Afraid of Fort Detrick Probe?” asked Sputnik News, one of Russia’s international propaganda outfits. Fort Detrick, a germ research facility of the U.S. Army in Maryland, has become an obsession of Chinese government media ever since the World Health Organization (WHO) announced an investigation into the role of the Wuhan Institute of Virology in the origin of covid-19. President Joe Biden’s recent order to U.S. intelligence agencies to check the possibility of a lab leak has only underlined the stakes for China’s communists, who still refuse to release raw data on the origins of a pandemic that has killed almost 4.2 million people, citing “privacy concerns.”

The coalescing of Chinese government mouthpieces around a single narrative for the source of the pandemic comes after a year of prodding by Lijian Zhou, a spokesman for the Ministry of Foreign Affairs, who began promoting the concept with a tweet linking to a Russian-aligned conspiracy website. Despite this connection, the conspiracy is unlikely to be a result of Russian-Chinese collaboration. Instead, the Russian government has created an environment where conspiracies can flourish and adapt, therefore increasing the likelihood that any partner of Russia will be well-armed in an information war.

On January 27, 2020, Vladimir Zhirinovsky, the firebrand leader of Russia’s ultranationalist Liberal Democratic Party, appeared on the Sunday night talk show of Vladimir Solovyov, a Putin devotee and the most popular host on state broadcaster Russia-1. There, Zhirinovsky mused that the Americans had released the virus either as a weapon against the Chinese or to profit from selling an antidote. Zhirinovsky offered no evidence, but as the virus spread around the world, so did his theory.

Nicolas Maduro, president of Venezuela, repeated the tale a month later, declaring “the coronavirus is a possible biological weapon against China.” Hossein Salami, head of Iran’s Islamic Revolutionary Guard Corps, made the same claim later that week. On March 11, 2020, a day before WHO declared the covid outbreak a pandemic, the Centre for Research on Globalization published a story claiming the initial outbreak had occurred at Fort Detrick. The Centre, long a clearinghouse for anti-Western conspiracies, trades editors and contributors with RT and Sputnik and partners with Kremlin-funded think tanks.

The Centre has been here before. In 2018, Russian GRU agents poisoned Sergei Skripal, a Russian intelligence agent who had defected to the U.K. Thereafter, the Centre stated that the incident was actually a result of nerve gas escaping from a nearby lab at Porton Down, a claim soon adopted as the official Russian position and adopted by far-left groups across the West.

The day after the Centre published its Fort Detrick story, Lijian Zhou, the Ministry of Foreign Affairs spokesman, tweeted a link to the article after accusing the U.S. Army of bringing Covid to China.

Chinese state media and diplomatic social media accounts promoted the conspiracy throughout the spring in 28 posts published between April and June. After that, publications slowed, with only 10 more posts in the remainder of the year, always in response to Trump administration accusations that the virus had escaped from the Wuhan lab. On May 24, 2021, news broke of a classified U.S. report suggesting the lab as the likeliest source of the virus. China dusted off the old conspiracy, publishing 30 pieces alleging a Fort Detrick origin that week, more than in the preceding six months combined.

On July 16, as WHO announced “audits of laboratories and markets in Wuhan,” the Chinese propaganda machine went into overdrive. Lijian held a press conference on behalf of the Ministry of Foreign Affairs announcing a petition signed by 750,000 Chinese “netizens” demanding an investigation into Fort Detrick. Global Times, CGTN, Xinhua, and People’s Daily amplified the story. In a press conference on July 26, Lijian cited work claiming that “the US is trying to ‘pin’ covid-19 on China” by one Sergey Latyshev. Lijian appears to be referring to a publication on the arch-conservative Tsargrad TV, owned by Putin ally Konstantin Malofeev.

Tsargrad TV, like the Centre for Research on Globalization and Sunday Night with Vladimir Soloveyev, rarely takes direct orders from the Russian government. But there’s no need to. These outlets thrive in a media environment that rewards anti-Western outrage and conspiracy. The publication of a story accusing the U.S. of “international blackmail” always suits Russia and, in this instance, perfectly suited China’s needs.

The Russian government can genuinely claim to have not created the conspiracy itself. Rather, it created the conditions where such a conspiracy could develop and adapt. Since WHO’s announcement, Sputnik and RT have posted more than twice a day in six languages on the Fort Detrick conspiracy, but most of these have been republications from outside outlets. The spread of a conspiracy that fits Russia’s goals so well, while requiring so little from Russia, shows the success of focusing on the right conditions over the right content.