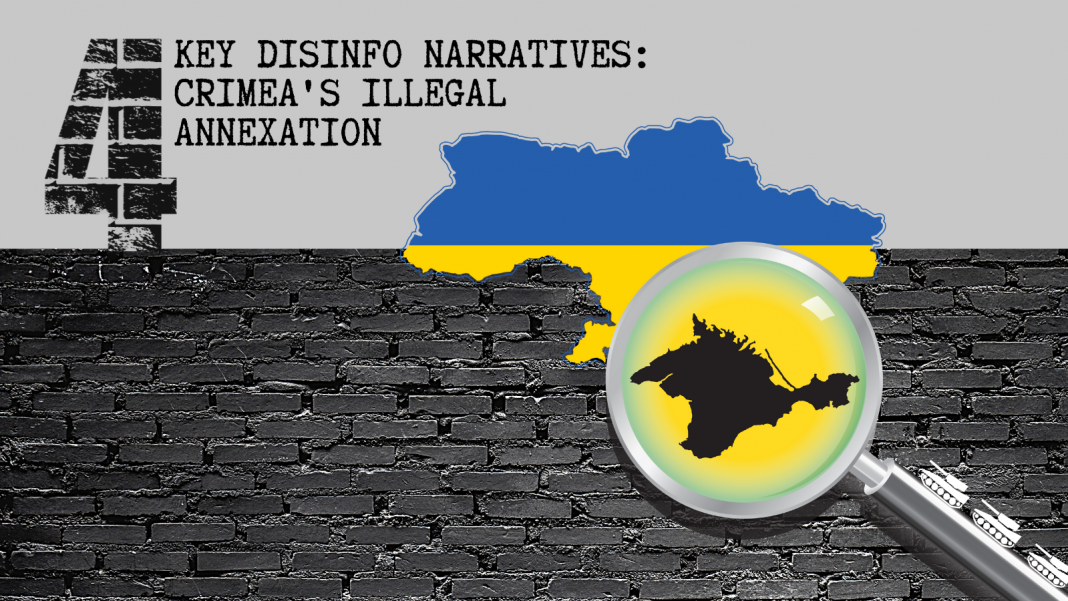 Eight years after being violently and illegally annexed by Russia, Crimea is still one of the main targets of pro-Kremlin disinformation. More than 840 cases in the EUvsDisinfo database are a testament of continuous efforts to portray the Kremlin as a “saviour” of Crimea and to justify the illegal annexation. These disinfo examples spread across many countries and languages: 437 are in Russian, 143 in Arabic, 79 in English, 42 in French, and more in other languages.

The European Union has reiterated its position that it does not and will not recognise the illegal annexation of the Crimean peninsula by the Russian Federation. In this context, disinformation and continuous attempts to whitewash the Kremlin’s deeds violating international law is the only way to get some sort of approval from audiences – both domestic and international.

We’ve analysed four types of the most common narratives poisoning the information environment since 2014. Not surprisingly, Putin has also used many of the toxic narratives presented below to justify the on-going unprovoked military attack against Ukraine (see also here and here).

The “Saviour”: Russia saved Crimea from peril, and Crimea is now a safe haven for everyone

Ever since the illegal annexation, Russia has been portraying itself as a “peacemaking” force, aiming at preventing a “genocide”, which Ukraine allegedly unleashed against the south-east part of the country. It also claimed that Crimeans were saved from slavery.

Pro-Kremlin outlets further tried to construct a positive image of Russia by describing Crimea as a free place, beneficial for local minorities, prosperous, a hugely popular tourist destination and a safe haven for any European seeking “refuge from aggressive sexual education”.

The “Democracy”: The annexation followed a “democratic” referendum and has been widely recognised

This is one of the most repeated disinformation narratives about Russia’s illegal annexation of Crimea. The pro-Kremlin media keeps alleging that Crimea became “part of Russia” following a democratic referendum. You can find more examples here, here and here.

At the same time, the Kremlin’s geopolitical delusions go as far as stating that Crimea is recognised as part of Russia by: the EU, UN, Norway, Naftogaz of Ukraine, generally by the West and even by the NYT and Coca-Cola.

The “Homecoming”: Crimea is and always has been a Russian land

Our reader is probably well familiar with the Russian slogan “Krym – nash! Crimea is ours!” used by the Russian authorities for celebrating the illegal annexation of the Ukrainian peninsula. It aims to highlight an alleged historical claim and tries to boost patriotic sentiments among local audiences by delivering the message that Crimea actually “reunited with its homeland” Russia.

But no matter how creatively the Kremlin tries to twist history, the fact remains: Eight years into the violent and illegal annexation, Crimea is not “nash”/“ours”, not a part of Russia. Insisting on that is to disinform, and repeating the slogan does not make it any more true.

The “Victim”: The West and Kyiv are harming Crimea

Pro-Kremlin disinformation often portrays the West as Evil. In the context of Crimea, the West has been vilified together with the Kyiv authorities. The disinformation machine has accused the West of “offending the Crimean people’s will” and obscuring truth about Crimea; NATO – of “implementing provocations”, seeking to “destabilise” the Black Sea region and preparing the “takeover of Crimea”.

On the other hand, the Ukrainian authorities are dehumanised by Russian state outlets and blamed for alleged “water genocide”, blocking electricity supplies and doing everything to “cut off” the peninsula, even building a 120-kilometre waterway to separate it from mainland Ukraine.

However, despite all these disinformation efforts to gain people’s hearts and minds and make believe the unbelievable, the truth is only one and simple: Crimea is and remains part of Ukraine.

Click here for a PDF version of the image below.